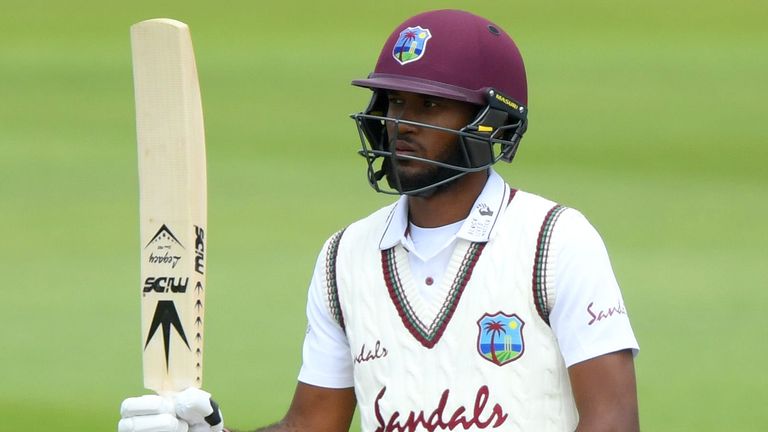 Kraigg Brathwaite and Shane Dowrich struck fifties as West Indies turned the screw on England by earning a 114-run first-innings lead on day three of the first #raisethebat Test.

The pair helped the tourists post 318 in reply to England's 204 all out despite Ben Stokes (4-49) and James Anderson (3-62) both beating the bat regularly.

Fellow seamers Jofra Archer (0-61) and Mark Wood (1-74) took a wicket between them on a day when Stuart Broad admitted he was "angry and frustrated" at being dropped for the Ageas Bowl clash.

England reduced the deficit to 99 runs before stumps as openers Rory Burns (10no) and Dom Sibley (five no) safely negotiated 10 overs, the scoreboard reading 15-0 at the close.

West Indies began the day on 57-1 and Brathwaite (65) and Shai Hope pushed on to post the first 50-run stand of the Test before being separated just before drinks.

Hope was given out lbw on 16 but enjoyed a let-off on review as replays showed Archer had overstepped but his reprieve lasted just four balls - Stokes safely pouching a slip catch to his right as Hope edged Dom Bess (2-51) on the drive.

Brathwaite's 18th Test fifty in 60 matches came off 113 balls with three fours - and was also his first since July 2018, when he scored tons in back-to-back Tests against Bangladesh - but there was to be no century this time as he fell victim to a tight lbw decision in Stokes' favour. 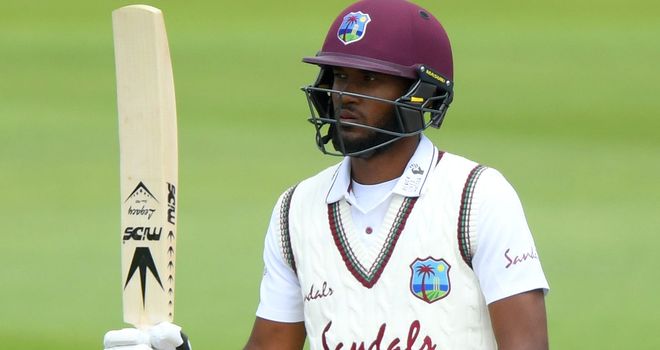 Shamrah Brooks (39), playing in only his fourth Test, looked fluent from the off as he scored 18 off his first 17 deliveries with four fours and West Indies reached lunch on 159-3, well placed to push past England's total with plenty of wickets in hand.

They lost two more before reaching parity - Brooks failing to overturn a caught behind decision won by Anderson and Jermaine Blackwood, whose reserves of patience again appeared in short supply as he slapped Bess to mid-off.

By tea the lead had grown to 31, with Roston Chase happy to drop anchor on his way to 27no off 115 balls.

Partner Dowrich, who had a horror tour of England in 2017 when he scored 24 runs in six innings at an average of 4.80, showed greater intent as he struck Bess down the ground for three boundaries before warming the hands of the off-spinner with a tough return chance that went begging on 25.

As if to make the point, Chase pushed the first delivery with the new ball from Anderson through the covers for four to bring up the fifty-run stand off 115 balls.

England continued to leak runs as Archer and Anderson struggled to build pressure, the partnership growing to 81 before Chase (47 off 142) was trapped on the crease - the DRS review going Anderson's way with the ball going on to clip top of middle.

Three years on from his struggles against the moving ball Dowrich reached his ninth Test fifty off 91 balls as England found seam in short supply under blue skies. 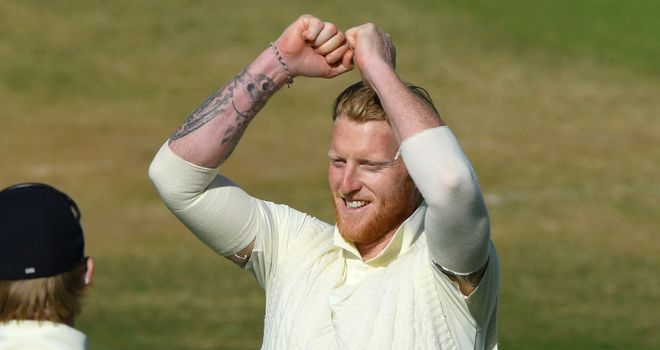 It was a short delivery that accounted for Jason Holder (five) - the West Indies skipper, who smote 202no against England in Bridgetown in 2019, again looking to go on the offensive but this time miscuing a pull off Stokes to fine leg where Archer tumbled forward to take the catch.

Not since 1996 had an England captain and his opposite number dismissed each other in a Test, when Michael Atherton and Pakistan's Wasim Akram combined at Headingley.

Stokes, bowling despite a sore left foot, bagged his third scalp and the 150th of his Test career by bowling Alzarri Joseph (18) after two boundaries through the slips and his fourth when Dowrich glanced down the leg-side off the back of the bat to Jos Buttler.

Wood grabbed his first wicket in emphatic style by knocking Shannon Gabriel's middle stump out of the ground but the day belonged definitely to West Indies.

Watch day four of the first #raisethebat Test between England and West Indies live on Sky Sports Cricket from 10.30am on Saturday.