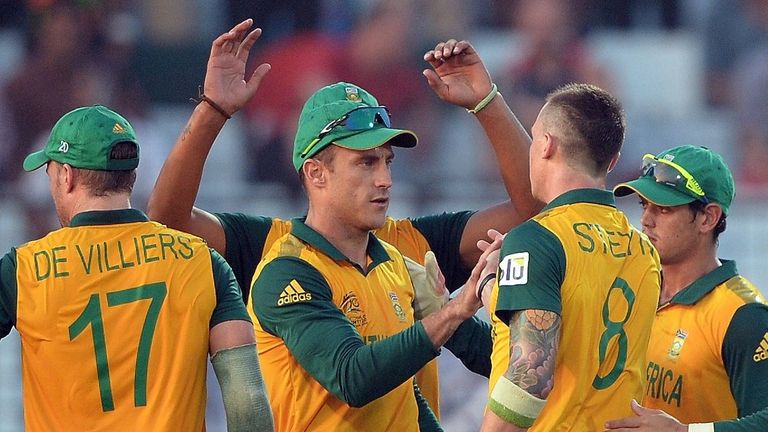 Faf du Plessis (centre): Back to lead South Africa against India in Dhaka on Friday

South Africa will hope to end India's perfect record in this year's ICC World Twenty20 when the two nations meet in the second semi-final on Friday, live on Sky Sports.

While India have made serene progress through to the knockout stages, defeating Australia, Bangladesh, Pakistan and West Indies in Group Two, their next opponents were made to work a little harder to reach the last four.

"When it comes down to the semi-finals, it's anybody's game."

The Proteas ended up recording three wins themselves, recovering from an opening defeat at the hands of Sri Lanka to squeeze by New Zealand and the Netherlands after nail-biting finishes.

Victory over England in a high-scoring encounter made sure they emerged from Group One, and they now face up to a trial by spin as they bid to reach the final of the tournament for the first time.

With the Dhaka surface set to suit the slower bowlers, even with the match starting late in the day local time, South Africa could hand a place in their line-up to slow left-armer Aaron Phangiso.

They will certainly recall Faf du Plessis, their Twenty20 captain now available again after missing the England match due to a one-match ban handed to him as punishment for his side's over-rate issues. AB de Villiers will hand back the reins, allowing him to focus solely on his batting.

The South African squad were helped in their quest to cope with India's plethora of spinners by the appearance of Australian Shane Warne at their practice session on Thursday.

The legendary leggie took the chance to have a word with his fellow former Hampshire slow bowler Imran Tahir, who has so far played a key role for the South Africans. He has picked up 11 wickets in Bangladesh and boasts an economy rate well below seven.

"It wasn't our decision. I think it was just Warne's decision," Du Plessis said.

"He thought he wanted to come and bowl a few balls to us. Obviously, it was nice to have him around as he has been such a fantastic bowler."

India certainly have plenty of slow-bowling options to use. The frontline pairing of Ravichandran Ashwin and Amit Mishra have been outstanding, combining for 16 wickets. Crucially, they are also going at less than six an over.

Mahendra Singh Dhoni's side have won their last six T20 fixtures and their captain has never lost a semi-final. India are also chasing a hat-trick of ICC titles, as they currently hold the Champions Trophy and World Cup. No nation has ever held all three at the same time.

It all means they are strong favourites for the game, particularly as they also played all their group games at the same Shere Bangla National Stadium.

"When it comes down to the semi-finals, it's anybody's game," Ashwin said at the pre-match press conference. "Whoever plays well on that particular day will have the advantage."