Meet Bombette Martin, a teenager from New York who carries with her both a skateboard and an Olympic dream.

At 14, she is part of a new breed of budding Olympians striving to qualify for Team GB to compete in one of the sports making its debut in Tokyo.

It's a major move into the mainstream for skateboarding, a sport that has its roots in alternative culture, having made its X-Games debut 26 years ago. 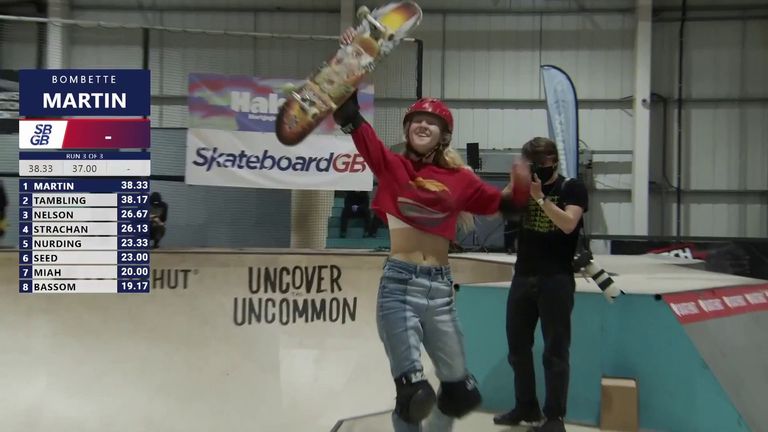 "I know there are some people that don't like agree, it shouldn't be like a competitive thing whatever, whatever… which ok I understand that's not for some people. But the people that say skateboarding is just a punk sport, it's for the delinquents, I guess that new upcoming teenagers that do it at a high level are kind of breaking that mould which is nice to see."

Bombette's sporting pathway began on the sidewalks and skateparks of Manhattan where she lives with her family, so no surprise she talks with an American accent naturally cultivated by growing up on the East Coast.

"I like to make the joke that I'm half a New Yorker, and 3/4ths a Brummie! I spent so much of my childhood in Birmingham because my dad is British, so I guess it didn't really cross my mind, or my family's mind, to even try and compete for America. We just decided to try and go for Great Britain and it's worked out."

Her dad Jon was a talented boxer who contested over 100 amateur bouts, a more traditional attempt to realise an Olympic dream when he tried to qualify for Atlanta 1996.

"He actually was trying to go to the Olympics himself, he was close but no cigar," says a smiling Bombette, whose name was inspired by her father's nickname of Bomber.

"My grandfather has a boxing gym in Erdington called the Rose & Crown, and so I spent a lot of time there when I was little and my dad used to train there. When he comes up with all these analogies for my skateboarding related to his boxing, and it annoys the hell out of me, but I guess he was a high-level athlete so I've got to listen to him."

If Bombette always had an affinity with her father's home country, it is a love affair with the food that has captured her heart.

"I will say British candy bars are way better," she says as her face instantly lights up with another smile, "I love baking cakes, and cookies, but I always end up eating all of the cookie dough before I even put it in the oven"

"So many people they bust on British food but it's so good. A full English fry up for dinner, like it's so good!"

At Tokyo skateboarding will be split into two disciplines:

Athletes will be judged on the difficulty and the execution of their tricks during a series of timed runs, similar to some of the snowboarding events that have become a staple of the Winter Olympics.

Bombette faces some fierce competition if she is to seal her spot on the plane to Tokyo, as only the world's top 20-ranked women and men in each discipline will qualify.

She is currently outside of that and will have to perform well at a series of qualification events between now and the end of June to be part of Team GB.

"Just to be able to say that you've been to the Olympics is insane, but just to know that I've made it to the top, to know that I've accomplished something and worked so hard for something, not just sat around on my butt all day long being lazy is just, I mean that's pretty cool.

"It would be amazing, I know all of my family would be so proud of me and I'm proud of myself, and that would be a real honour."

Leading the way for British hopes is Sky Brown, who at the age of just 12, is ranked at number 3 in the world and is almost certainly going to earn a place in the squad despite having to battle back from life-threatening injuries caused by a huge fall last year.

The 2019 World Bronze medalist was rushed to hospital with skull fractures and a broken wrist after falling 15 feet from a ramp onto a flat concrete floor.

Sky is back on her board though, posting videos on Instagram of her training, and she is expected to be Team GB's youngest Olympian this summer.