Stuart Bingham has revealed how a casual jibe from Northern Irish cueman Mark Allen spurred him to become world champion.

Allen claimed in 2011 that Bingham had "no bottle", but it came back to haunt the Antrim man when he lost to the Basildon potter at the Australian Goldfields Open that year.

Bingham went on to claim that title, his first major victory after over 10 barren years as a professional, and the 38-year-old has gone from strength to strength, adding another major trophy at the Shanghai Masters this season and now the Betfred World Championship.

His 18-15 victory over Shaun Murphy, one of the most popular the Crucible has known, was followed by first-time finalist Bingham celebrating long into the night and patiently posing for hundreds of pictures with supporters and admirers at an after-match party.

But Bingham was keen to point to the slur from Allen almost four years ago as he toasted his trophy success.

"I've got to give thanks to Mark Allen. He got my back up that week in Australia by saying I had no bottle, but since then that's all changed," Bingham said.

"I'm world champion but I'm going to be the same person, I'll be playing in all the tournaments and hopefully I'll be a good role model as world champion.

"Any kids out there growing up wanting to play should stick at it. That's what I've done." 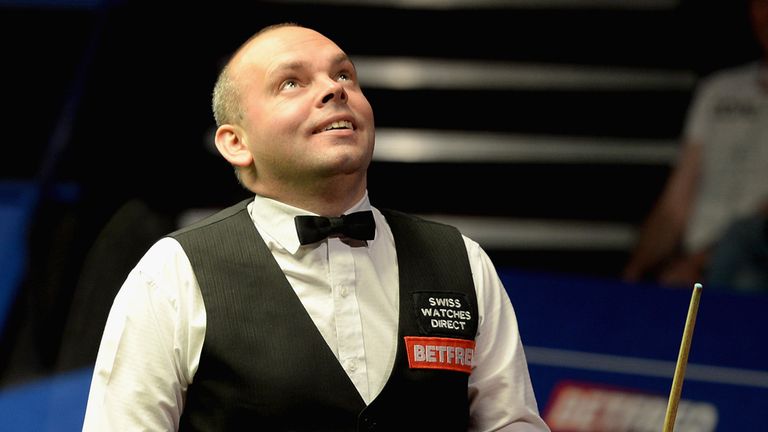 I'm world champion but I'm going to be the same person, I'll be playing in all the tournaments and hopefully I'll be a good role model as world champion.

Bingham has been a success story of the Barry Hearn regime, with the veteran sports promoter taking over as chairman of World Snooker five years ago and swiftly introducing a host of new events.

While Ronnie O'Sullivan picks and chooses, and plays only when it suits him, Bingham is the busiest player on the circuit and rarely misses a tournament.

He believes such a heavy workload fine-tuned his game for the 17-day tournament in Sheffield.

Yet even Hearn was surprised Bingham held himself together in the final, given the enormity of the match.

"I'm astonished because he's quite an emotional lad: you saw it in the semi-finals with tears, and phoning home, and telling himself to grow up," Hearn said.

"That's just lovely because his vulnerability, I think, was very appealing to the general population and the people on the circuit know he's a really nice fella.

"He's been taking shots on where in another world you might think he should play safe. It's been like someone saying, 'If you play Augusta or Pebble Beach, should you lay up at the 18th?'.

"It's a dream for Stuart to be in the final and he's delivered."