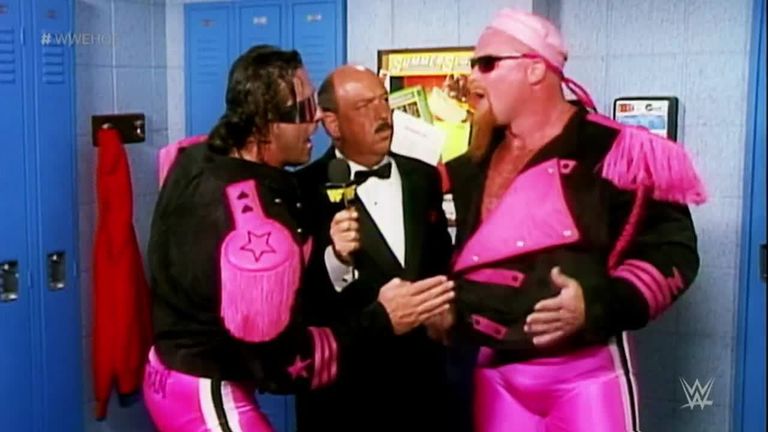 Legendary WWE tag team the Hart Foundation will enter the Hall of Fame as part of the 2019 class.

Brothers-in-law Bret 'The Hit Man' Hart and the late Jim 'The Anvil' Neidhart were one of the most popular tag teams in the 1980s and early 1990s and captured two world championships during their run at the top.

How to see WrestleMania on Sky Sports!

The duo joined WWE's tag team ranks in 1985, guided by "The Mouth of The South" Jimmy Hart; Hart's technical prowess and Neidhart's raw power made them a team to be reckoned with from the moment they debuted.

They would hold the belts until October of that year before eventually losing them to Strike Force - Rick Martel and Tito Santana - before eventually dispensing with the services of Jimmy Hart and turning face.

By 1990, the team had fought off Jimmy Hart's attempts to tear them down, and turned their attention back to WWE's top tag team prize.

After bulldozing over The Bolsheviks in seconds at WrestleMania VI, The Hart Foundation made it clear they were coming for the World tag titles and, at SummerSlam 1990, defeated Demolition in a grueling two-out-of-three falls match to claim their second championship.

Though they split up by the summer of 1991, with Bret Hart moving on to singles competition and Neidhart reforming the Hart Foundation in many guises, the team left an indelible mark on the division and created many lasting memories for the WWE fans.

They will be induced at the Hall of Fame ceremony on the Saturday of WrestleMania weekend, with Bret Hart becoming a two-time inductee after originally entering as a singles competitor in 2006.