Fan banned from Washington Wizards' arena and faces criminal charges after running onto the court; incident is the fifth instance of bad fan behaviour this post-season; Boston Celtics fan arrested and banned from after throwing water bottle at Kyrie Irving on Sunday

The Washington Wizards will ban a fan who ran onto the court and was tackled by security during the team's playoff clash with the Philadelphia 76ers.

In addition to being banned from the Capital One Arena, the fan could face criminal charges, according to a statement from Monumental Sports & Entertainment, the company that owns the Wizards and the building.

"During this evening's game, a fan was apprehended by Capital One Arena Special Police after attempting to breach the court," said the statement, posted on social media. "He will be banned from the arena and charges are being pursued with DC MPD."

Eyewitnesses at the game said the fan breached security, jumped and slapped a backboard while the 76ers and Wizards were at the other end of the court. 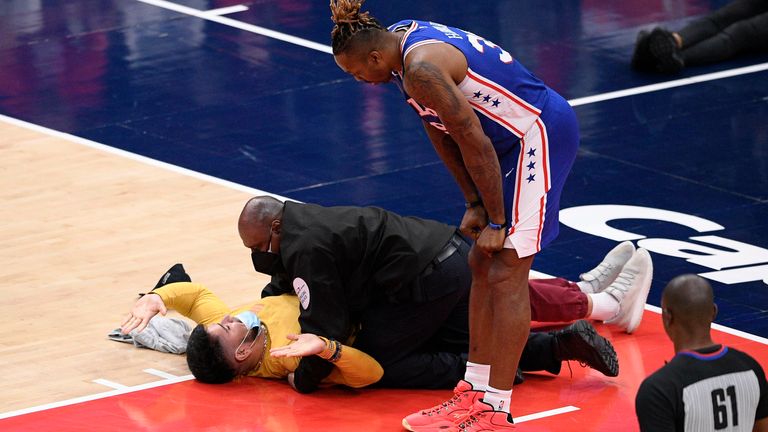 The Inside the NBA discuss the issue of players' safety following the latest incidents of fan disorder.

While a security guard tackled the fan to the ground, possession changed hands and both teams started heading in the fan's direction.

Sixers center Dwight Howard was seen standing over the fan and speaking to him for a few moments.

It marks the latest in a string of incidents between NBA fans and players since the start of the postseason and an overall return to full or mostly-full capacity in most arenas.

A Boston Celtics fan was arrested and banned from TD Garden after throwing a water bottle at Kyrie Irving after Sunday night's game against the Brooklyn Nets. 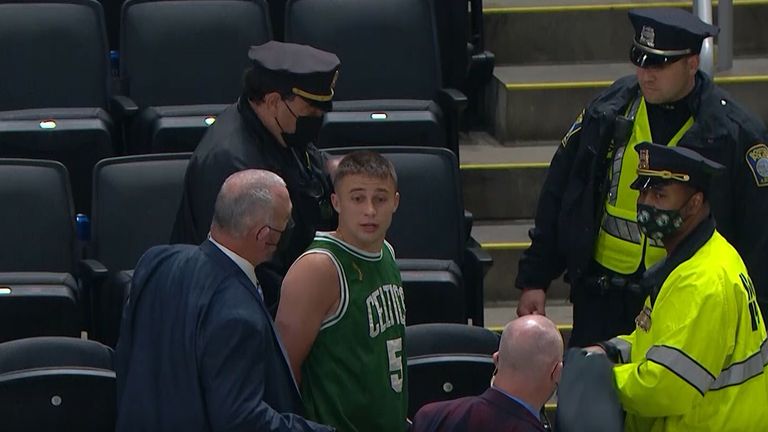 A Boston Celtics fans is taken away in handcuffs after a bottle was thrown at Kyrie Irving at the end of the Brooklyn Nets' victory over the Celtics.

The fan has since been charged with felony assault and battery. 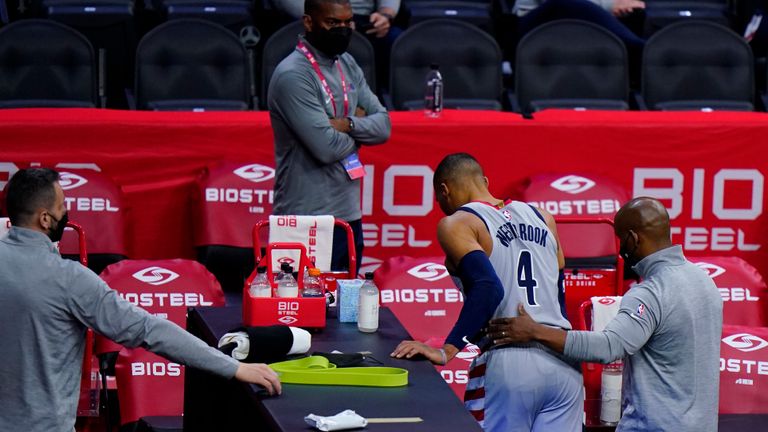 Washington Wizards' Russell Westbrook left their game against the Philadelphia 76ers early due to injury and lost his cool after having popcorn thrown at him as he made his way to the dressing room.

And on the same night, a Philadelphia 76ers fan dumped popcorn on Russell Westbrook at Wells Fargo Center as he was heading into the locker room with an injury.

As a result, the Sixers have since revoked the fan's season ticket and banned him from all events at the Wells Fargo Center, as well as issuing a statement apologising to Westbrook.

The Wizards point guard called for more protection for the players, saying there were numerous instances where fans in the stands felt they were "untouchable".

"I wouldn't come up to me on the street and throw popcorn on my head because you know what happens," Westbrook said. Washington Wizards guard Russell Westbrook has called for more protection for players from fans after a spectator threw popcorn at him as he left the court during Wednesday's loss to Philadelphia 76ers.

"In these arenas, you got to start protecting the players. We'll see what the NBA does. Obviously, I have learned to look the other way. But to a certain extent, you can't just keep looking the other way.

"There has to be some penalties or something to put in place where fans just can't come to the games and do and say as they please."

The NBA urged fans to show respect for players and officials and said it will vigorously enforce an enhanced code of conduct to ensure a "safe and respectful environment for all involved".