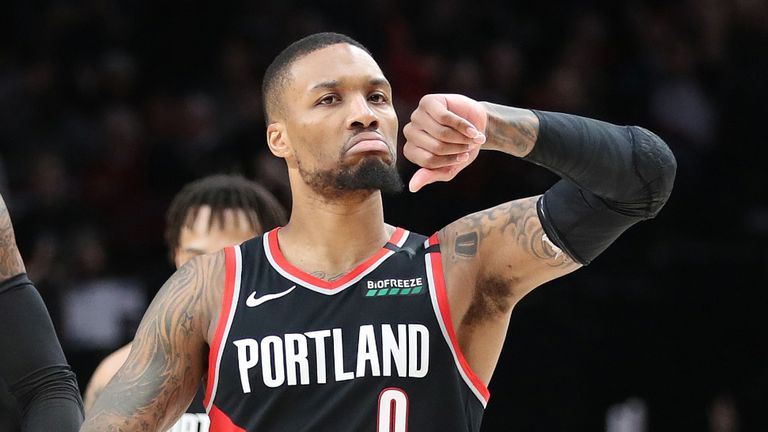 Relive all the drama from one of the 2019-20 NBA season's greatest games – Damian Lillard erupts for 61 points to lead the Portland Trail Blazers past the Golden State Warriors in overtime on MLK Day.

Lillard's previous career high was 60 points - achieved earlier in the 2019-20 season against the Brooklyn Nets. It was the seventh regular-season game of Lillard's career with more than 50 points. Lillard's three-pointer tied the game with 14.9 seconds left and sent the game to overtime. Willie Cauley-Stein's dunk put the Warriors up 121-115 in the extra period. Anfernee Simons hit a three to pull Portland closer before Lillard's three-pointer with less than a minute left tied it again. Gary Trent Jr's lay-up gave Portland the lead with 34.6 seconds to go.

Burks' three-pointer briefly gave the Warriors back the lead, but Lillard and Whiteside each added a pair of free throws to seal it. The crowd stood and cheered as Lillard made the free throw that gave him the record.

Lillard's 61 points were the most scored in a single game in the 2019-20 season prior to its suspension. He made 17 of his 37 attempted shots (including 11-of-20 three-pointers) and was a perfect 16-of-16 from the free throw line. The Blazers franchise star also provided 10 rebounds and seven assists.

Lillard became the first player in NBA history with 60-plus points and 10-plus three-pointers in a game, and just the sixth player with multiple 60-point games. Damian Lillard scores 61 points in a game, a Portland Trail Blazers record and the most point in a game this season

"I guess if somebody's going to beat my record, it's good to be me. I'm excited about it, I'm happy about it, but I wish it counted for three wins instead of one."

Blazers center Hassan Whiteside (on what impresses him most about Lillard)

"Just how cool and how calm he is. He is always a calm guy, regardless of whatever happens." 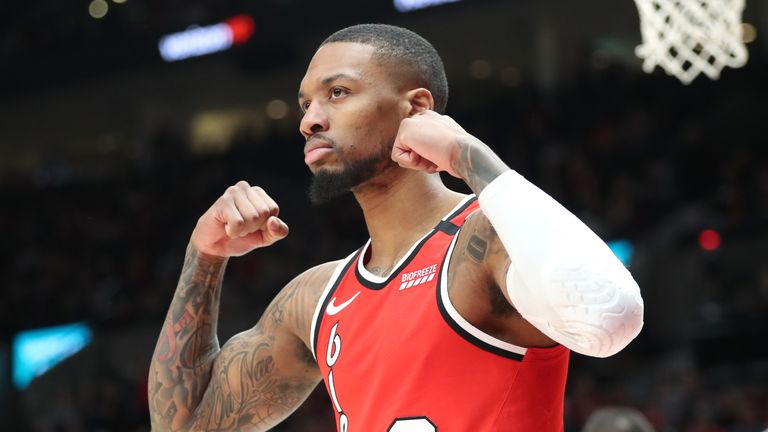 Check out Damian Lillard's best plays, dunks and clutch shots from the 2019-20 season to date

"You run out of adjectives. (Lillard) is an amazing player."

"(Lillard) is a great player. He is an All-Star that has had a million big shots in his career, so none of it was surprising. You just take it for granted with him."

The 61-point performance kicked off a spectacular scoring run in which Lillard scored 293 points in six games.

He led Portland to five victories in those games and cemented his place among 2020's Western Conference All-Stars (though a subsequent groin injury would rule Lillard out of the All-Star Game).

After an inconsistent start to the 2019-20 season, Lillard's explosive start to 2020 (he averaged 34.1 points per game across 15 January games) kept Portland's season alive and dragged them back into the Western Conference playoff picture.

When the NBA season was suspended on March 11, the Trail Blazers (29-37) were ninth in the West, one place and three-and-a-half games shy of the eighth-seeded Memphis Grizzlies.