Natalie Haythornthwaite celebrated her 50th international appearance in England's final game of the Vitality Nations Cup and capped another stellar competition as the outfit's new captain.

The 27-year-old, described by Tamsin Greenway as England's "most creative player" ahead of the four-nation tournament, played every minute of every match and continued to thrive in her leadership role.

New head coach Jess Thirlby had announced Haythornthwaite as her captain at the end of 2019 and that decision has proved to be an inspired one.

At the time of the announcement, she praised Haythornthwaite's grit, robustness and resilience and all of those qualities were present in abundance across the four Vitality Nations Cup match-days.

Throughout the series, regardless of the opponent, the attacker stepped up. She led by example and coupled fluid work in attack with game-changing defensive moments. Haythornthwaite gave it everything and left it all out on court.

Turning point of the quarter? @TamsinGreenway thinks so...

On top of her physical output, the captain's engagement with the crowd provided lifts when the Roses needed them and her support of those around her, particularly 21-year-old Amy Carter, drew the best out of her team too.

"Nat has been really impressive and she's really embraced the leadership role," Thirlby said after England's final match and victory over South Africa in the third-place play-off.

"I think that we've really got the best out of her. She goes back to Suncorp soon, so her playing every minute of every game has been for a reason. 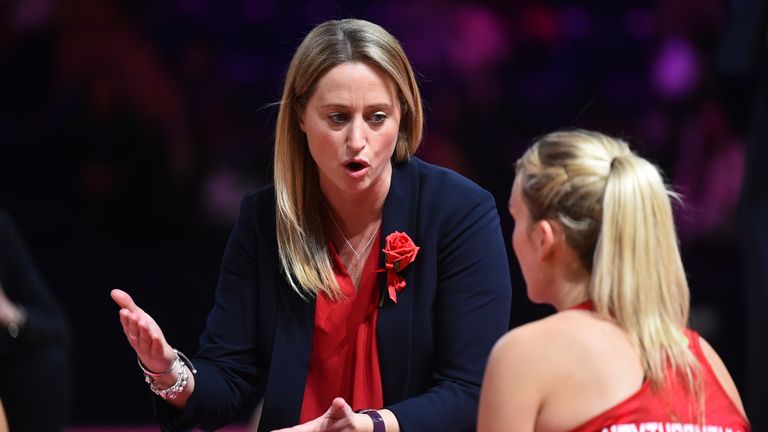 She's approachable, positive and knows what it takes to win. I believe she has developed more of the grit, robustness and resilience needed to lead on some of the biggest stages and there is more depth to her leadership now. She represents the values and behaviours we care about most as a Roses team and leads by example out on court.

Haythornthwaite, who also can shift to GA in order to switch up the picture, looks most at home in England's WA bib. It's a position she's made her own, moving ahead of Chelsa Pitman, and her head coach has been impressed with her diligent approach.

"Nat's very natural in the WA role," Thirlby said. "I'm really pleased to see how well she's become a student of the game down that end of the court.

"Her decision making and the speed at which she makes decisions [is excellent]. She recognises when to swing the ball and has a lovely feed on her, even with different shooters in the circle."

When it comes to the captain's work at GA, she experienced both sides of the coin in terms of her shooting stats during the competition. However, the fact that Haythornthwaite has the ability to keep defenders honest, and mix-up the pace and tempo within the circle, is a huge benefit.

Of course, at some point in the future, the Roses may have the world-class shooting unit of Helen Housby and Jo Harten returning.

As a pair Housby and Harten are pure box-office and their understanding together is second to none, but Haythornthwaite's ability to shift over to GA, remains an asset.

Competitions like the Commonwealth Games and the Netball World Cup have brutal schedules and versatility across the board always pays dividends.

With George Fisher and Eleanor Cardwell being two other standouts from the Nations Cup, the Roses are well-stocked up front moving forwards.

Greenway, who coached Haythornthwaite previously within Superleague, completely agrees with Thirlby's assessment of the 27-year-old's abilities in attack.

"It's not just the work rate she does around the edge and how calm she is on the ball, it's also how involved she gets the crowd and how vocal she is to the rest of her team-mates," Greenway said.

"What I love is that she brings her whole team together at the end of a quarter, before they go to the coach, that's the sign of a leader."

Once again @nataliesymone is leading by example for @EnglandNetball - big D then glorious feed.

Haythornthwaite, like Stacey Francis, Kate Shimmin and the returning Layla Guscoth, will now return to Australia for the rest of their Suncorp Super Netball sides' pre-season campaigns.

For Thirlby, it's time to reflect on the takeaways from the Vitality Nations Cup as a whole and without a doubt, one of her greatest positives will be the work of her new captain and the prospect of building the Roses around her moving forwards.