Watch the full interview during The Netball Show which will be live on Sky Sports News at 2pm on Wednesday, May 13

Helen Housby catches up with Sky Sports to discuss life in Australia, the New South Wales Swifts and their aim to return to Suncorp Super Netball in style.

The 25-year-old, who famously shot England's gold medal-winning goal at the 2018 Commonwealth Games, joined Sky Sports' Hannah Wilkes via video from her home in Sydney.

As was the case with all of the English athletes who play their domestic netball in the southern hemisphere, Housby had a very quick choice to make when it came to this global pandemic.

Did she return to England and be with her family or remain in her second home and place of work, 10,000 miles away from them in Sydney?

"It was a really tricky decision," Housby said during the interview which will be shown in full on The Netball Show on Sky Sports News on May 13.

"I'm not going to lie I was looking at flights, I wasn't really sure where my head was at and I spoke to my mum about it.

"In the end, remaining here in Australia is definitely the right choice for me.

"It's the best place for me to be training-wise and also, when the league restarts I wasn't sure if I was going to be able to get back in the country? Or, if I'd have had to go through a special quarantine, so that was weighing on my mind too. 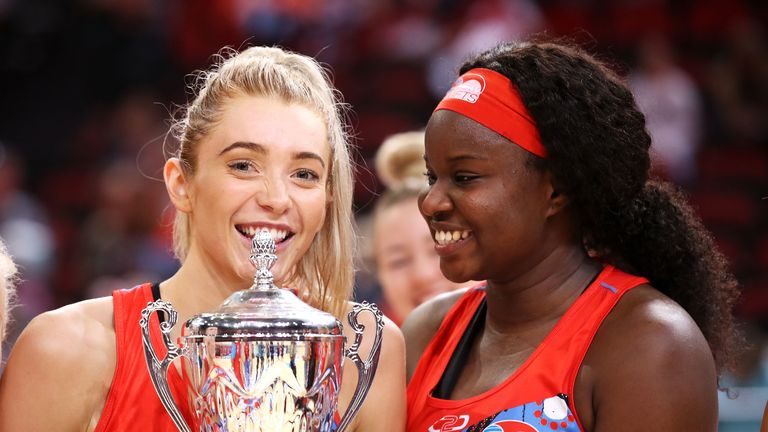 I live with Sammy [Wallace] and once this all started, Trinidad's borders shut so she didn't have any chance of getting any where near home. I knew that she would be staying here and I didn't want her to be in the house on her own for months on end.

"I thought that it would be nice that we could isolate together and use the time beneficially because we do play together a lot when we're on court.

"So, there were a lot of different factors and I'm really glad that I did stay here."

Housby, who has been with the NSW Swifts since the end of 2016, added that she's used to leaving England in January and not seeing her family again until September or October. Of course, this current global situation has more complex layers to it, but technology is coming to the fore.

"I think that I'm speaking to my mum more than I would if I was actually living in the same house as her," she added.

After taking a break from international netball after last year's Netball World Cup, Housby returned to Australia after Christmas and started pre-season training alongside her team-mates at the Swifts.

Normally she would miss the first part of pre-season due to international duties, so she enjoyed the added time in Sydney as they collectively set about planning their title defence.

"Now, we're keeping connected as a club. We do know that this is going to end, eventually, and we want to come out of it in a good place," she said, about the team training as individuals at home.

"We're still training and we're lucky to have a good club in the Swifts. They've provided us with pretty much a full home gym, a netball post and a rebound trampoline.

Trying to juggle with one hand and pass with the other....give this one a go folks 😰 Make sure you watch til the end 🤦🏼‍♀️ I actually got worse the more I practiced, how does that work? 😂 @redbulluk

"It would be very easy to lose a lot of fitness but just having goals every day and every week makes it a lot easier.

"Our home gym is the best gym that I've worked out in [with its view]. We've got a squat rack, track bars, bikes and everything that we would normally do with regards to S&C, right here in our house. 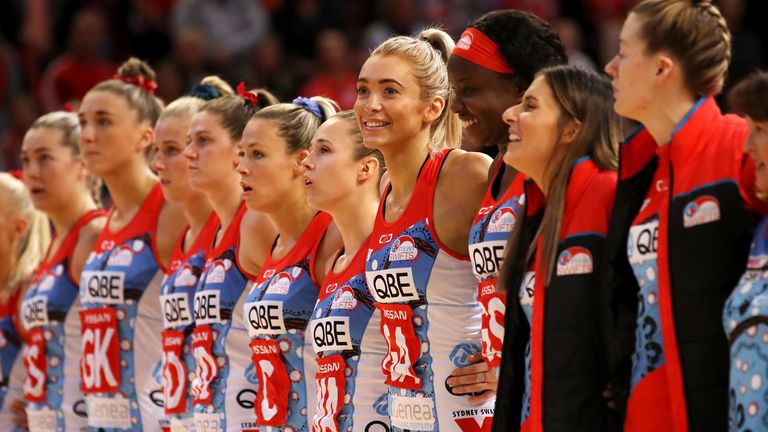 It’s a good challenge to see how the team adapts to it and works around it because we might not have that much notice before we’re going to be playing.

Helen Housby on the NSW Swifts' reaction to time apart

"Losing match sharpness is always a worry," the shooter added. "But, I'm hopeful that we're going to have enough time together as a squad before the season starts.

"If we don't, and if it's going to be a bit tighter than we'd want, then I know that the connections are already in place. This team has been together for pretty much four years now and we're building every year.

"Last year, was the culmination of that work with winning the championship so I'm hopeful it won't be too hard to find the connections again."

Netball Australia and the Suncorp Super Netball league say they are in "full return-to-action planning".

In terms of the Suncorp Super Netball's structure, without a single game of the 2020 season having been played, there's plenty for decision-makers to consider. Also, the sport's international Test matches with the Quad Series and Constellation Cup planned for September and October.

"There's a few different options and we're not really sure where they're going to go," Housby said of the Super Netball season.

With the decision-making in the hands of others, Housby does have her own thoughts about what all teams can do with regard to continuing netball's upward trajectory.

"Something that netball has had over the last couple of years is momentum and I think it's important that we don't lose that. I think that the teams which are being proactive and are putting things in place are going to come out of it the best.

"Netball has been on such a wave since the Commonwealth Games [in 2018] and with the World Cup, I don't want this to stop that wave from continuing.

"The next Commonwealth Games is in England, that's the end goal to head towards and it's about keeping interest up before we get to that Games."

Watch the full interview with Helen Housby during The Netball Show which will be live on Sky Sports News at 2pm on Wednesday, May 13.