Loughborough Lightning beat Surrey Storm 57-54 in the opening game of the Vitality Netball Superleague Spring Showdown, despite both Mary Cholhok and captain Nat Panagarry being unavailable.

International shooter Cholhok and captain Panagarry were both declared unavailable just an hour before the first centre pass and the loss of the duo caused many to mark Storm as favourites.

Cholhok has scored 499 goals for Lightning this season, with only Storm's Proscovia Peace accumulating more in the league while Panagarry provides leadership and determination in mid-court.

However, Victoria Burgess' team used the 60 minutes of netball against Storm to illustrate their depth, as both experienced individuals and younger players delivered.

Ella Clark stepped into the goal shooter role superbly and at the other end of the court, Alice Harvey worked tirelessly marking Peace and linking up with Fran Williams.

The result means Lightning have only lost one match this season and they face Celtic Dragons on Sunday.

Storm also have a quick turnaround ahead of their second match of the Vitality Netball Superleague Spring Showdown, when they take on league leaders Manchester Thunder.

After losing the first quarter by four goals, Lightning used their defensive prowess to deliver a stunning momentum change during the second and win it by 10 goals.

Harvey, Fran Williams and Beth Cobden worked exceptionally hard to disrupt the feeds into Peace, with goal keeper Harvey being awarded the player of the match.

Due to Lightning's productive second quarter, Surrey Storm trailed 30-24 at half-time. However, Mikki Austin's team used the interval well and the head coach made personnel changes.

Austin took herself to the bench, introduced the experienced Sophia Candappa in at wing attack and shifted Yasmin Parsons out to centre.

Candappa continuously looked to Peace and in defence both Leah Middleton and Grace Sullivan disrupted Lighting's work moving forwards. The result was another one-sided quarter, this time in Storm's favour.

The last set of 15 minutes went goal for goal for a significant period of time, before Lightning edged 51-49 ahead with six minutes to play.

Emma Thacker's arrival at goal attack had created a new dynamic for Lightning and it forced Storm to make defensive changes.

After a key contact call in Storm's attacking end, Lightning put their foot on the accelerator for one last time in order to see the contest out.

Celtic Dragons won just their second match of the season, prevailing 55-51 over Leeds Rhinos Netball in the second game of the afternoon.

"We have been building week on week and knew that type of performance was in us," Dragons' captain Nia Jones said after.

"What's been lacking at times has been skill execution in big moments and in this game, our structures were on point. We back our defence to turn ball over in a close game when we need too, and that happened."

As Jones said, Dragons' victory was built on composure and the ability to hold firm at both ends of the court. In the outfit's shooting circle, Wales international Georgia Rowe scored 40 of their 55 goals and missed just one.

In defence, Shaquanda Greene-Noel continues to light up the competition and finished the game with nine deflections and six interceptions.

For Leeds Rhinos Netball, the result marked their seventh loss of the season as they play under a new head coach in Tracey Robinson.

Robinson, who only arrived on New Year's Day, was disappointed by her side 'falling away' when the pressure came on and thinks they need to develop their belief as a unit.

Rhinos must now recover quickly before meeting Team Bath Netball in the first game of the day on Sunday at 12pm, before Dragons take on Lightning at 1.45pm.

Manchester Thunder delivered a sensational performance to keep their unbeaten record intact. Karen Greig's outfit dismantled Strathclyde Sirens during the first half and went on to win 73-51.

A 40-19 half-time lead enabled Greig to shuffle her pack and get 11 out of her 12 players on court. Nat Metcalf was rested for the day after a busy season so far.

Sirens' captain Gia Abernethy labelled their first half as 'pathetic' and her side responded after the half-time break. They also showed adaptability to overcome an injury to goal attack Niamh McCall, with Emma Barrie taking to court well. 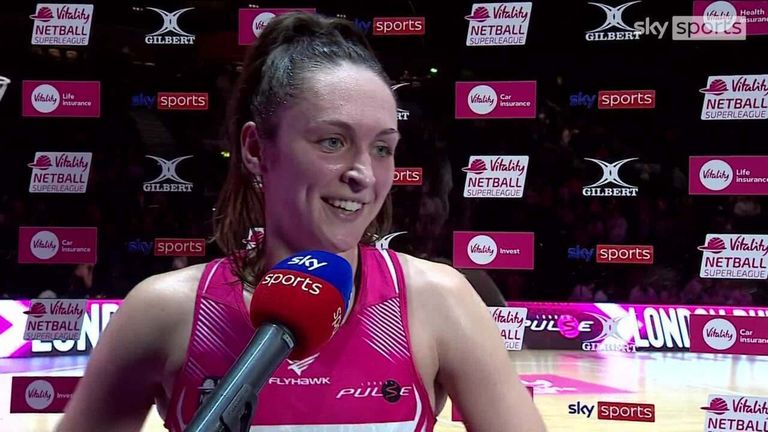 London Pulse held their nerve to edge past Wasps 44-38 and restore their confidence after two successive losses. Olivia Tchine continues to come of age in their shooting end - scoring 33/34 - with Sam Bird's bench also coming to the fore too.

In the final contest of the day, Saracens Mavericks overcame Severn Stars 58-44 to win their third match in a row.

Mavericks' defensive unit of Jodie Gibson and Razia Quashie really disrupted Stars' flair and forced mistakes. Head coach Kat Ratnapala was also able to change her line-up during the encounter to ensure the team enter their match with top-four rivals Pulse on Sunday as fresh as can be.

The Vitality Netball Superleague Spring Showdown continues on Sunday with five further matches. Every contest is live on Sky Sports and streamed live on the Sky Sports YouTube channel from 11:30am.