Ja'Marr Chase is on pace for 1,500 receiving yards as the early Rookie of the Year frontrunner and one of the NFL's leading deep threats. Watch the Cincinnati Bengals face the Baltimore Ravens on the road live on Sky Sports NFL from 6pm Sunday.

Remember when Ja'Marr Chase couldn't buy a catch during preseason? As the Twitter stans say, 'They had us in the first half, I'm not gonna lie'.

For a few days the rookie wideout became a self-appointed proponent of the 'should have drafted Penei Sewell' fan club and preseason panickers association as he dropped four of his five targets over two games.

Preseason clamour elected to focus on diluted football and the rustiness of a 2020 opt-out while wiping his role as the nation's leader in receiving yards across LSU's National Championship-winning 2019 campaign from memory. Some people never learn.

Since then he has clobbered coverages, soft and press, man and zone, as the early Rookie of the Year frontrunner and a challenger to college team-mate Justin Jefferson's rookie record 1,400 receiving yards; Chase already has 41 catches for 553 yards and five touchdowns through six games.

The Bengals could have and arguably should have prioritised protection for their No 1 pick quarterback coming off a serious knee injury with a Sewell or a Rashawn Slater at fifth overall, while trusting the production of playmakers available later in the Draft. Could have, should have, didn't.

Instead they welcomed Joe Burrow's favourite Tigers target, whose deep threat has armed an otherwise ordinary offense with the knockout punch it needed regardless.

Ed Orgeron's era in LSU may be stumbling to a close, but the 2019 fireworks of Burrow and Chase live on. "Chase has added a lot of juice to their offense," said Baltimore Ravens cornerback Marlon Humphrey, who will be tasked with covering the Bengals receiver this weekend. "It's actually been really surprising. He's really made the NFL look pretty easy."

A 'go-to' page in the Burrow-Chase textbook had been their deep connection down the right sideline: Chase would torch man coverage, sometimes bracket coverage, and Burrow would drop a dime into the bucket. Chunk yardage, 'move the chains kind sir', thank you very much.

The two have reintroduced it seamlessly upon their reunion, Chase splitting cornerback Jerry Jacobs and safety Will Harris for a 34-yard pickup in Sunday's 34-11 win over the Detroit Lions. The most subtle of stutter-steps had been enough to sell the inside release, from which point it was game over as Chase gobbled up the outside leverage.

His impact downfield was evident without the ball even going his way, this time Chase following through with his crossing route to shadow a self-isolating Joe Mixon on the bootleg pass from Burrow before bulldozing Harris to clear the way for his running back's 40-yard touchdown. His separation was instant enough that Burrow really could have thrown to either for the score.

WHAT A BLOCK BY JA’MARR CHASEpic.twitter.com/dDjJRnb5Yx

Jacobs was later picked on again in a well-executed timing package from the Bengals, Tyler Boyd's pre-snap fly motion dragging cornerback AJ Parker up to the line of scrimmage where his blitz was duly blocked by Mixon, giving Burrow the green light on a 53-yard shot to Chase whose post-route had burned Detroit's Cover 3 as stranded safety Tracy Walker III failed to assist his team-mate over the top.

Burrow's protection is improved without being consistent, while the Bengals offense as a whole is effective without being particularly explosive. But Chase gives them an out, a cherry to Mixon's hard yards and the scissors from stacks, the curl and whip routes, the crossers and the outs.

He enters Week Seven averaging a fifth-most targeted air yards with 16 according to Next Gen Stats, his 20.5 yards per reception are second only to Las Vegas Raiders receiver Henry Ruggs III and he leads the league with eight deep receptions and four deep touchdowns, per PFF.

Such has been his influence thus far that his three drops have barely been mentioned.

"If he came out of a lab, he's somewhere a mix of DeSean Jackson and Odell (Beckham)," Ravens defensive coordinator Don 'Wink' Martindale told reporters.

During a six catch, 159-yard performance against the Green Bay Packers in Week Five came a 70-yard touchdown that saw him evolve a fade against zone into a deep-over by out-running Darnell Savage Jr from one side of the field to the other and strolling away for the score in the final minute of the first half. It pays to have second effort speed and commitment in a developing offense that will require its quarterback to extend plays from time to time.

Chase later reminded of his versatility with the shifty hips and nimble feet to punish soft coverage with a 28-yard catch-and-run off his hitch route. Cut out the deep ball? He can still hurt you underneath.

Boyd and Giovani Bernard led the Bengals with 350 yards after the catch in 2020 - Chase already has 152 through six weeks.

His emergence as Cincinnati's focal point on offense was further underlined when he was isolated one-on-one against Eric Stokes during a trips concept, the result being a 19-yard gain on a contested catch. And again on third-and-two in overtime when he was isolated to the right as part of a quads formation before keeping his feet inbounds to complete a 21-yard catch under the nose of Stokes. This was some duel between the two rookies, by the way. 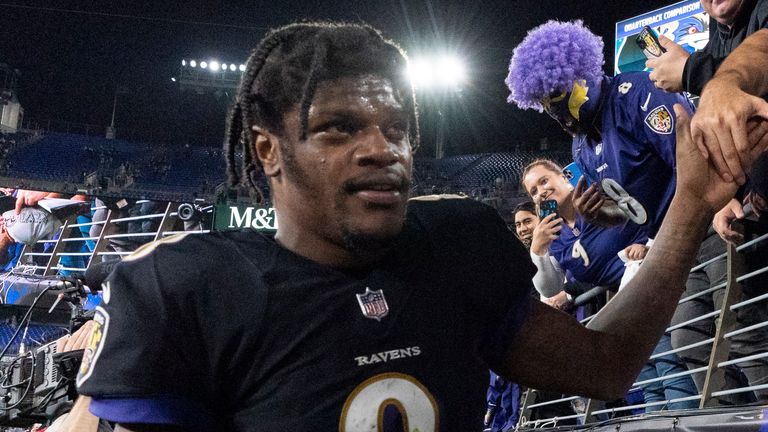 Bashaud Breeland endured the Chase experience in the Bengals' Week One win over the Minnesota Vikings, trailing in the rear view mirror of his man on a 50-yard go-route touchdown in quarters coverage. He just about avoided a near-identical play later in the game, which Chase finished with five catches for 101 yards and a score.

Trips concepts had been employed again, with Chase as the feature target. On one play he split the shallow and deep routes for a wide-open catch on the out, on another, of similar design that saw the out replaced by a crosser, he reeled in a 13-yard catch after an inside release into outside leverage into in-cut route combination.

Already his ability to create separation is in the upper echelon of receivers across the league, while there have been mere flashes of the contested catch prowess and run-after-catch explosiveness likely to become more prominent with time.

He has three Rookie of the Week awards to his name so far this season and is on pace to hit 1,500 receiving yards as only the second player in NFL history behind Randy Moss with 500 yards and five touchdowns in their first six outings.

Ja’Marr Chase when targeted in the 2 min drill:

For all that Chase has injected, the Bengals are still just 19th in offensive DVOA (Defense-adjusted Value Over Average), which calculates a team's efficiency based on down-and-distance of each play), and 23rd in scoring percentage. Burrow has also been sacked 16 times while being allowed just 2.3 seconds on average in the pocket. *Insert Penei Sewell line here*.

So the Bengals can be better, a lot better. But hindsight and alternative universes aside, Chase is doing exactly what the Bengals needed him and asked him and drafted him to do.