Cincinnati Bengals quarterback Joe Burrow completed 25 of 32 passes for 348 yards, with the 2020 NFL Draft number one overall pick getting the better of his 2021 equivalent Trevor Lawrence, who went 17 of 24 for 204 yards and also rushed for a touchdown for the Jacksonville Jaguars Cincinnati trailed by two scores, down 14-0 at the half, but second-year quarterback Joe Burrow tossed two second-half touchdown passes to C.J. Uzomah to twice level the score. 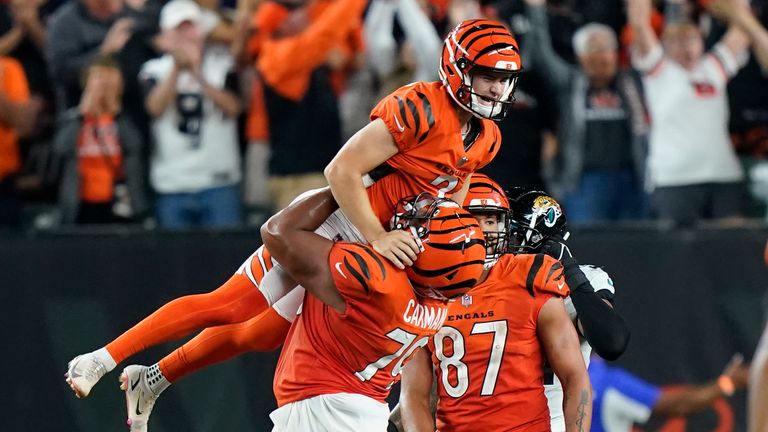 With the game tied up at 21 apiece with five minutes and 40 seconds left on the clock, the Jaguars opted to punt when facing a 4th-and-4 from midfield and never got the ball back, with Burrow marching his team down the field with a faultless final drive to set up McPherson's game-winner. It was the first time the Bengals (3-1) held the lead all game.

Burrow completed 25 of his 32 passes for 348 yards, with the 2020 NFL Draft number one overall pick getting the better of his 2021 equivalent Trevor Lawrence - just the second matchup in NFL history between a rookie No 1 pick and the previous year's top selection. Lawrence completed 17 of 24 throws for 204 yards and also rushed for a touchdown for Jacksonville, while running back James Robinson found the endzone twice. But it was not enough to earn the Jaguars (0-4) a first win of the season - their winless run in the NFL now stretches to 19 games dating back to last season.

It was very much a game of two halves. The Bengals, held scoreless, in the first, gained 313 of their 420 yards after the break. Jacksonville, meanwhile, had 240 of its 341 total yards in the first half. 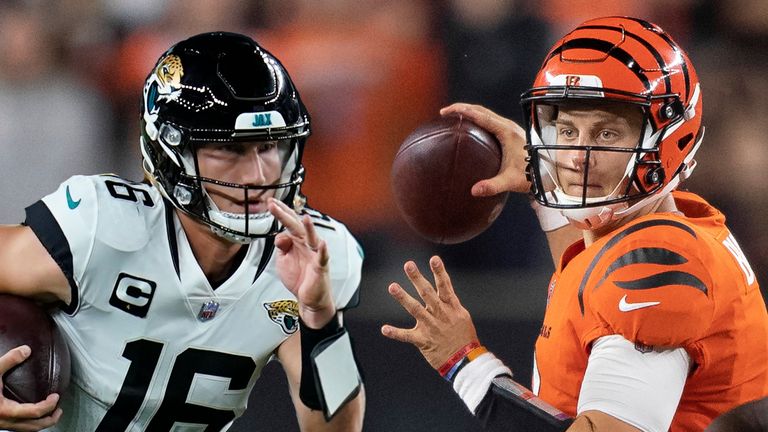 Robinson opened the scoring with a six-yard run into the endzone on the Jaguars' second possession, after McPherson missed on a 43-yard field goal try for Cincinnati.

There would be little more offense to talk of in the first half until Lawrence capped an impressive 12-play, 80-yard drive with a seven-yard scoring run of his own to double Jacksonville's lead with just under five minutes left in the first half.

The Jaguars even had a chance to move ahead by three TDs before the break, but Cincinnati linebacker Logan Wilson stuffed Lawrence on a fourth-and-goal attempt from the one-yard line in the final minute.

The Bengals then finally woke up on offense to start the second half, driving 69 yards on four plays to score on their opening series - Uzomah catching a 22-yard touchdown pass from Burrow. 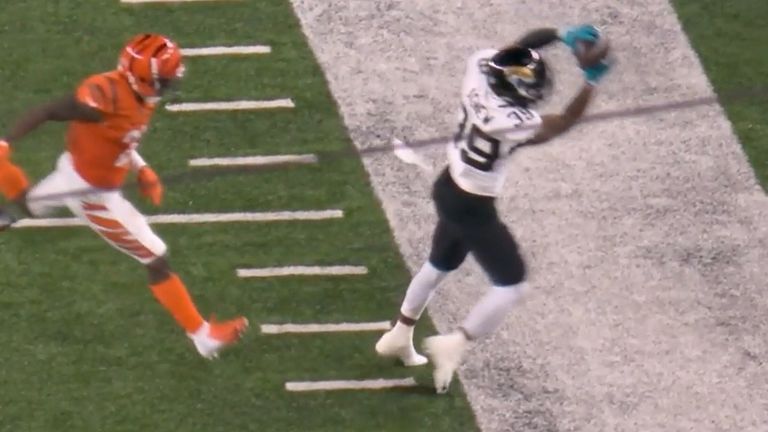 Mixon would then tie the game up with a goal-line TD on Cincinnati's next possession, though the Jaguars would answer right back and retake the lead with Robinson's second score of the day early in the fourth quarter.

Burrow's pocket movement allows him to find Uzomah to tie it up!

But Burrow tied the game up for a second time less than six minutes later as he scrambled out of the pocket and found Uzomah at the Jacksonville 16-yard line, who then ran the ball in the rest of the way for a 31-yard touchdown.

Jacksonville this time had no response on offense and after being forced to punt, Burrow would set up McPherson's kick for a Cincinnati win as time expired.

Burrow was brilliant, and was the undoubted winner of the battle of the No 1 QBs. That being said, though his stats dwarfed those of Lawrence, this was the rookie's best outing of the season so far despite only scoring a touchdown as a rusher.

Robinson also rushed for two scores for the Jaguars in an impressive outing, while Bengals receiver Uzomah caught five passes for a career-high 95 yards, with his two scores also a single-game high. Tyler Boyd too impressed, with nine receptions for 118 yards, while on defense linebacker Wilson's stop on fourth down just before the half was arguably the key play of the game.