As many as eight games on Sunday were decided by one score. We had the usual upsets, big plays and tight finishes - it's the theme of this NFL season so far through nine weeks.

Most would have said it was a big positive for the New York Jets to even keep this one close against the Buffalo Bills, but they ended up winning the game. 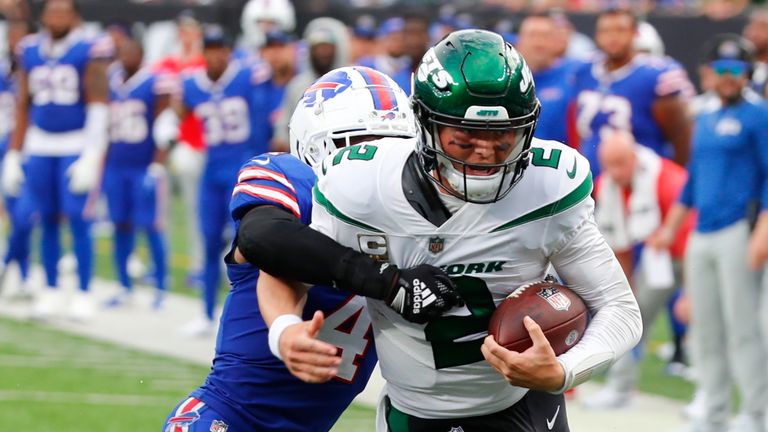 Their defense was lights out. Sauce Gardner continues to impress as a rookie, as well as D.J. Reed in the secondary. They've also got a good pass rush, making an incredible quarterback in Josh Allen look very uncomfortable. The run game was also there, even without star rookie Breece Hall - they rushed for over 170 yards.

I'm very impressed by what the Jets are doing this season. And it was a great way for this team to bounce back after a difficult loss to the New England Patriots. They are proving they're no fluke.

I've been speaking to a lot of Jets players this season and they genuinely are not surprised by where they're at. It's what they expected; they believed they could be this team. They're a confident bunch.

Another week in the NFL, and another game where Tua Tagovailoa throws for over 300 yards and three touchdowns, this time against the Chicago Bears. It is becoming a regular thing now for the Miami Dolphins. 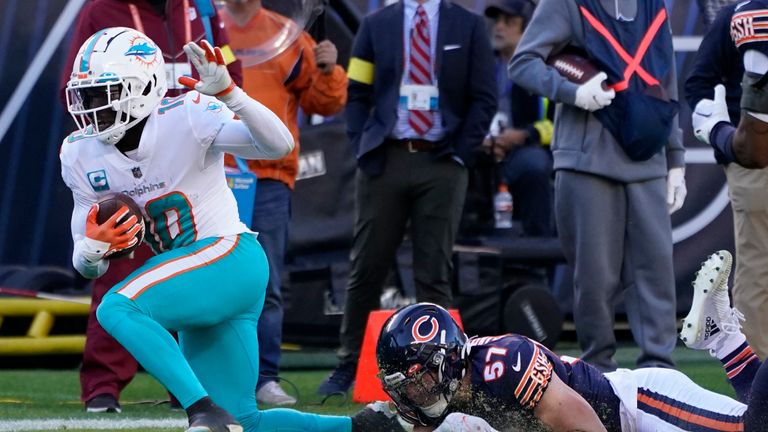 They're so hard to stop because he is so quick with his decision-making - the ball comes out of his hand so fast - and the receivers are so fast too. He is throwing the ball in under two and a half seconds, and by that time Tyreek Hill and Jaylen Waddle are already 25 yards down the field.

As a result, defenses are terrified of being beaten deep, so they give Miami a lot of the middle of the field and their offense are feasting on that.

Hill has over 1,000 yards already and we're only nine games into the season. It's incredible! 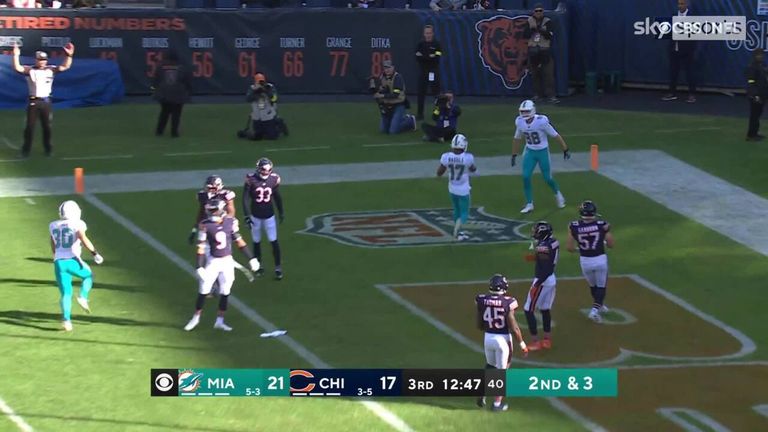 3) Where have you been, Joe Mixon?

When the Cincinnati Bengals went on their run to the Super Bowl last year, so much was made of the play of quarterback Joe Burrow and receiver Ja'Marr Chase, but Joe Mixon and the ground game was also a big part of that. 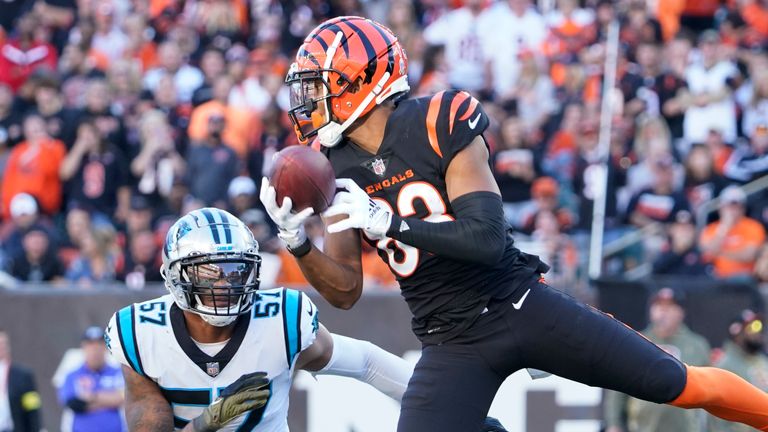 He has been missing for most of this season, but he arrived in a big way on Sunday with 211 scrimmage yards and five touchdowns. Yes, it was against a poor Carolina Panthers team, but I want to see if the Bengals can stick to this style going forward and more of a balanced attack?

If you give even a 45-year-old Tom Brady, with no running game and no offensive line, just enough time, let him hang around, he'll beat you. 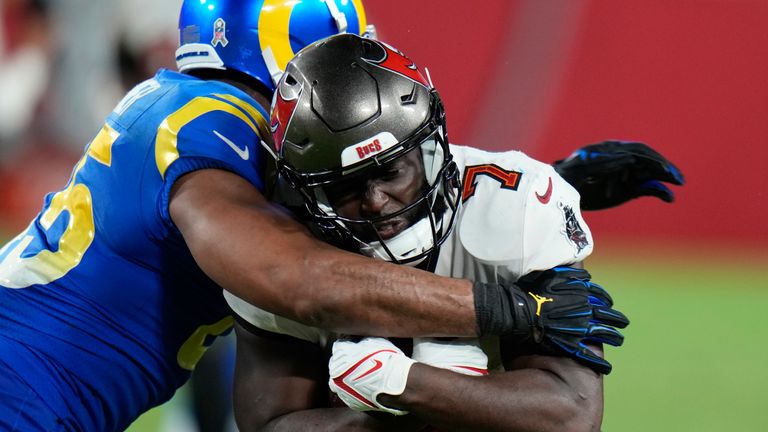 The Los Angeles Rams continue to be hugely disappointing this season. They've been dreadful in the fourth quarter of games - outscored 71-10 in the final period. That's on coaching, but also their big players not being able to close out games.

They played really soft on defense. They allowed Brady a deep pass down the middle and then he was able to work the sidelines before throwing the game-winning touchdown in the closing seconds. It was classic Brady, and a great moment in what will most probably be his last season.

The Tampa Bay Buccaneers have been pretty awful - not terrible, but certainly bad by their standards - yet they're in first place in the NFC South, with no one running away with that division. And weirdly, because of the respective strength of their divisions, as it stands the 4-5 Bucs aren't in a dissimilar spot to the 6-2 Bills in terms of controlling their division and their destiny.

I was really disappointed by the Las Vegas Raiders' collapse from being 17-0 up in the second quarter to finding a way to lose that game to the Jacksonville Jaguars. There have now been three games this season where the Raiders have led by 17 and have lost. That's unforgivable, and it's the sort of thing that will get head coach Josh McDaniels fired. And these NFL owners aren't afraid to pull the trigger… we've seen it already this season with Matt Rhule in Carolina and most recently with Frank Reich at the Indianapolis Colts.

He's now firmly on the hot seat, because that team simply can't close out games. How can you run the ball for three-straight weeks with Josh Jacobs to the tune of about 200 yards per game, but then you get a 17-point lead in this game and yet you can't run it to save your life?

Also, Davante Adams had nine catches for 146 yards and two touchdowns in the first half… and then just one grab for zero yards in the second. That is shocking!

Player of the Week: Joe Mixon

I left him out of my NFL Fantasy Football team, which absolutely destroyed me. But it has to be Mixon after his five-TD day for the Bengals. 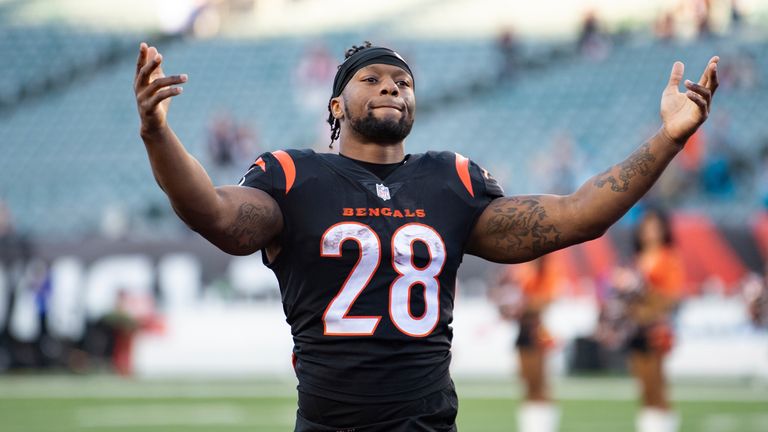 It was a reminder that if he gets the right blocking, he is one of the best running backs in the NFL. He is going to be key for the Bengals the rest of the way.

Play of the Week: Justin Fields Not only did it keep Chicago in the contest, but it was one play of many that he made in a really entertaining game that offered hope for the future of the Bears and their fans.

Fields is an incredible talent who is going to grow as a passer. But for now, let him do his thing, let him run free. He has made the Bears one for the more entertaining teams in the NFL in recent weeks.

And I loved the clip of Dolphins head coach Mike McDaniel shouting at Fields as he ran out of bounds at one point on the Miami sideline… he was basically saying, 'please, stop it!'

Coach of the Week: Kevin O'Connell

I'm a bit conflicted about this choice, because Kevin O'Connell is an offensive-minded coach, but his Minnesota Vikings unit does tend to get bogged down at times in games.

They'll score fast in games, then will follow it up with about six punts in a row, before then finding another way to score again.

Yet, this team are 7-1, are on a six-game winning streak and every one of those wins has been by one score. You look back to last year, and this Vikings team lost a lot of heartbreakers; this season, they're finding a way to get over the line, and I think that is down to a coach who gives his players such confidence.

You can see their team spirit come through in the way they celebrate as a team - on the field, in the locker room and even on the plane! They had an old curmudgeon as a coach before in Mike Zimmer, who wouldn't have allowed those sort of things.

Whatever magic formula they've found, it's working, because they've practically assured themselves a playoff spot already at only the halfway point of the season.

Jeff Saturday as the new interim coach of the Colts really is a head-scratcher.

I really like Reich, but I think it was inevitable that he was going to get fired as the Colts' season was heading south. They made a change at quarterback, fired the offensive coordinator… that was really the only logical next move.

It was textbook from owner Jim Irsay really, all the way up until the hiring of Saturday. I believe he now becomes the first head coach in the league to have never coached at NFL or college level - he has only coached high school football before.

He was an All-Pro player for the team though, and was a really good leader. During the NFL lockout of 2011, he was a key negotiator in completing the new Collective Bargaining Agreement (CBA) between the NFL and NFL Players' Association. There's obviously something about him.

But it's one to keep an eye on, because it's a hugely unconventional move by the Colts. I'm curious but also dubious.