Christian Wade says he has been "trying not to tear up" after it was announced he has signed with the Buffalo Bills.

On Monday, the franchise announced they had signed Wade as part of the NFL's International Player Pathway Program, which aims to give athletes from outside the USA an opportunity to train in the league and earn a place in a team's squad.

Wade announced in October that he was retiring from rugby to pursue his NFL dream, and says signing with the Bills has left him emotional.

"I've been trying not to tear up all morning," Wade told Sky Sports News. "Obviously with the things I achieved in rugby, to then go and walk away from that to go and to do this, it's been huge.

"I don't think many people can understand how much this whole thing means to me. To get that call today took me back a bit.

"It's only the beginning, but I'm really excited and happy inside.

"It's a lot to process right now, and whenever I'm speaking about where I've been and now this is happening, I feel like I start to slip into understanding that a little bit, but I'm sure when I go home I'll probably be bawling.

"I know it's huge, I just haven't processed the whole thing yet."

Wade, who lies third in the Premiership's all-time try-scorers list with 82, says his decision to leave rugby was down to a desire for fresh stimulus.

"I needed a new challenge," Wade said. "I needed to stimulate my brain in a new way, stimulate my body as well in terms of the physical training that I'd been doing in rugby.

"I just needed something to give me that motivation again."

The 27-year-old is not the first person to make the switch from rugby to the NFL. Alex Gray spoke to Sky Sports in January about his journey from the UK to North America, while Christian Scotland-Williamson signed a reserves contract with the Pittsburgh Steelers at the beginning of this year after joining the same pathway programme in 2018.

Wade, who went to school with Scotland-Williamson and has known Gray since they were teenagers, says their success galvanised him to make the move to America.

"That gave me that extra encouragement, that little push that I needed, because I knew I had my family and my friends who believe in what I do, and any choice I make they will be with me the whole way." 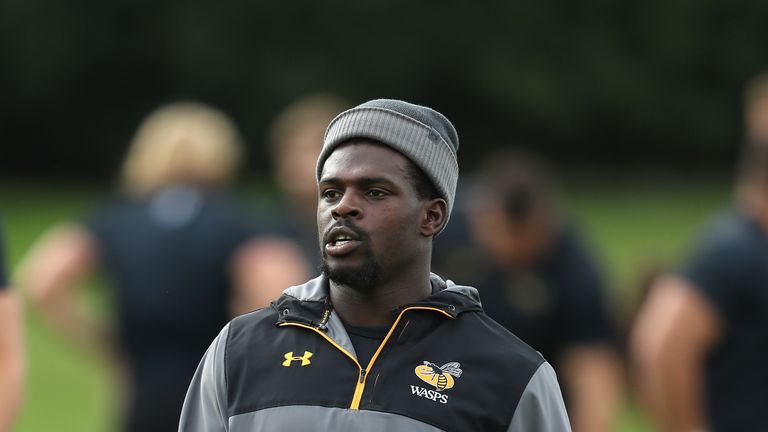 I definitely want to be a part of a Super Bowl one day, and that's going to be part of my motivation.

The ex-Wasps man says training in the NFL has given him a window into how difficult it is to succeed in the league.

"A lot of hard work gets put into it, you have to pay huge respects to the guys who are in the league, especially those who have been there years and years.

"There's all sorts of stuff that's going on. It's a very demanding sport on the pitch and off the field; you can see why not many people make it or don't last very long."

As part of the pathway programme, Wade was invited as a guest to watch the Patriots win Super Bowl LIII in February, and says the experience ignited more ambition.

"That definitely opened my eyes again as to how big this sport was and how big that occasion was as well.

"I definitely want to be a part of a Super Bowl one day, and that's going to be part of my motivation."