"If he wants to resume his career in the NFL, then obviously it's gonna take a team to make that decision," Goodell said. "But I welcome that, support a club making that decision, and encourage them to do that"

Kaepernick, whose kneeling protests sparked debate and became a symbol of the fight against racial injustice, filed a grievance against the NFL in 2017, claiming collusion as no teams signed him after he parted ways with the San Francisco 49ers. He and the NFL settled in 2019.

Kaepernick's kneeling protest during the 2016 season came under renewed focus in the United States in recent weeks, as Black Lives Matter protests against racial injustice and police brutality take place across the country following the death of George Floyd.

"Well, listen, if he wants to resume his career in the NFL, then obviously it's gonna take a team to make that decision," Goodell told ESPN. "But I welcome that, support a club making that decision, and encourage them to do that.

"If his efforts are not on the field but continuing to work in this space, we welcome him to that table and to help us, guide us, help us make better decisions about the kinds of things that need to be done in the communities. 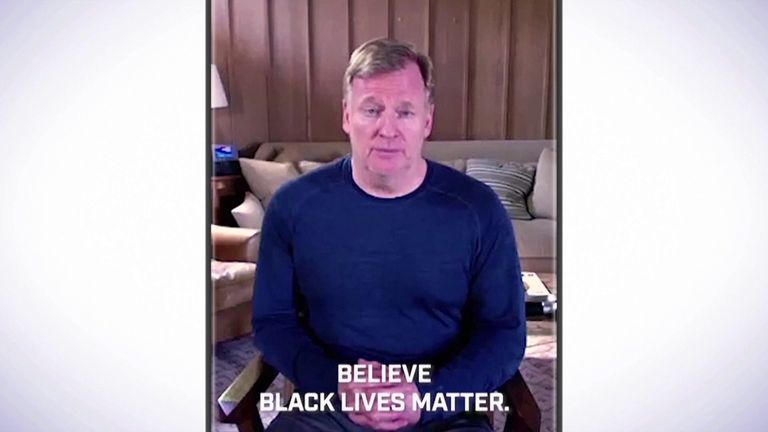 "We have invited him in before, and we want to make sure that everybody's welcome at that table, and trying to help us deal with some very complex, difficult issues, that have been around for a long time.

"But I hope we're at a point now where everybody's committed to making long-term, sustainable change."

Last week, at the prompting of a group of prominent black NFL players, Goodell said the NFL admits it was "wrong for not listening to NFL players earlier and encourage all to speak out and peacefully protest".

He added the NFL's support for the Black Lives Matter movement and called for changes to wipe out systematic racism, but he received criticism for failing to mention Kaepernick specifically.

Current and former players, including Hall of Famer Terrell Owens and two-time Super Bowl winner Malcolm Jenkins, have called on the league to apologise to Kaepernick.