The wait is nearly over and the new NFL season is almost upon us!

The action begins on Thursday, September 10 when the Kansas City Chiefs host the Houston Texans, live on Sky Sports.

Before then, it is time to assess 2020's contenders.

We are previewing all eight divisions, and here you can find our views on the AFC East... Taking over from a six-time Super Bowl winner and three-time League MVP is a huge task, but Newton has never been one to shy away from a challenge and is blessed with a natural confidence that will stand him in good stead this season.

Newton will be given all the support he needs by offensive coordinator Josh McDaniels, but it just remains to be seen if he can avoid the injuries that disrupted his career in Carolina.

Major additions: Newton aside, the pick-up of Lamar Miller is an intriguing move, adding depth to an already-crowed backfield including Sony Michel, James White, Rex Burkhead and Damien Harris.

Devin Asiasi and Dalton Keene are both third-round draft picks who will compete with Ryan Izzo in a tight end crew depleted by Rob Gronkowski's in March 2019.

The Patriots struggled at times with a creaking secondary last season, so the signings of Adrian Phillips and Cody Davis should give them plenty of energy at safety.

Last season: For the 16th time in the last 17 years, New England claimed the AFC East title with a 12-4 record, but they then suffered a surprise 20-13 defeat to Tennessee on wildcard weekend - the Patriots' first home defeat in the post-season since 2012.

Prospects: Despite losing Brady, New England still have arguably the best NFL coach in history in Bill Belichick, who has proved time, and time again, that writing him and his team off is not advisable.

Newton can lead the team into the playoffs if his offensive line, and his body, holds up, although a tough schedule looks a little concerning.

Prediction: 1st (11-5), another AFC East title, but going deep in the playoffs is hard to see.

Key man: It's not just that Josh Allen is a highly-talented young quarterback, it's more about the entire offense being built around the 24-year-old to compliment his strengths.

Allen was quietly efficient in 2019, but he barely scraped past 3,000 yards passing while throwing 20 touchdowns. However, it has to be said that his list of favourite targets did not extend far beyond John Brown and Cole Beasley.

This is a big year for Allen as he looks to justify the hype that comes with being the seventh Draft pick, and the feeling last year was that he needed one big star to throw the football at.

Major additions: … step forward, Stefon Diggs. The signing of the speedy wideout from Minnesota should be huge for Allen, and the Bills offense in general.

Diggs had only 63 receptions last season, compared to 102 in 2018, but his abilities as a deep threat were outlined by his 17.9 yards per catch - six of them for touchdowns.

Veteran cornerback Josh Norman signed a one-year deal back in March, although his preseason has been disrupted by a hamstring injury.

Last season: 10-6 and second in the AFC East, and the rebuilding process in Buffalo under McDermott and general manager Brandon Beane gave much cause for optimism going forward.

Their playoff run ended at the first hurdle as they were pipped in overtime by Houston, but Allen showed what he was capable of under pressure when he engineered an 11-play drive in a little over a minute that set-up a Stephen Hauschka field goal that tied the scores with five seconds remaining. Prospects: The Bills may need one more season to dethrone the Patriots at the top of the AFC East charts, but they are heading in the right direction with a bold, entertaining offense and one of the strongest all-round defensive units in the Conference.

Last season's appearance in the postseason was only their second in 20 years, expect them to make it a third this season.

Prediction: 2nd (11-5) - second to the Patriots but enough to clinch a playoff berth.

Key man: Le'Veon Bell's first season with the Jets was a huge disappointment, rushing for less than 800 yards in 15 games with only three touchdowns, although he did clock up over 1,000 scrimmage yards with his 461 yards receiving.

Missing the entire 2018 campaign after refusing to sign the franchise tag with Pittsburgh was clearly a contributing factor, as was Sam Darnold's issue with turning the ball over during the first half of the season, but there should be no excuses for Bell this year.

The 28-year-old appears to be in better shape as he looks to justify the Jets' investment in him, and given the required help from the offensive line, Bell could have the opportunity to get back to elite running back status.

Major additions: Breshad Perriman is only 26 years old, but he is already on his fifth different NFL team having signed for the Jets on a one-year deal. The wideout featured 14 times for Tampa Bay last season and scored six touchdowns, and he joins a decent collection of receivers which includes new-signing Chris Hogan and third-round Draft pick Denzel Mims.

Losing safety Jamal Adams to Seattle was a bitter pill for defensive coordinator Gregg Williams to swallow, but getting Bradley McDougald softened the blow.

Last season: 7-9 and third in the AFC East. However, considering the Jets were 1-7 halfway through the regular season, to win six of their last eight games shows how things are progressing in the green part of New York.

Darnold had an unflinching willingness to learn from his mistakes, and the same could be said of Gase, to an extent. A significant reduction in turnovers galvanised the entire squad over the season half of the season, giving them plenty of momentum for the forthcoming campaign.

Prospects: The rebuilding at the Jets remains an ongoing process, and they still look a little light in areas, but their 6-2 finish to last season has installed a fresh belief among Gase's team.

Holes in the offensive line have been plugged, and Williams emerged as one of the best defensive coordinators in the league last year.

The future is bright, the question is how long it will take for the extensive makeover to transform into a genuine challenge for the play-offs, which the Jets have not been a part of for 10 years now.

Prediction: 3rd (8-8) with the optimism stifled by a difficult schedule.

Key Man: DeVante Parker enjoyed a breakout season in 2019, notching over 1,200 yards receiving and nine touchdowns, and he proved to be one of the best route runners in the league.

The Dolphins adding strength at wide receiver, as well as most other areas of the squad, should only help Parker be just as efficient this season whoever is under centre.

Ryan Fitzpatrick looks likely start at quarterback in week one against the Patriots, but it's surely only a matter of time before first-round Draft pick Tua Tagovailoa gets his chance to build a rapport with Parker.

Major additions: Take your pick! Tagovailoa was one of three first-round picks in the Draft along with offensive tackle Austin Jackson and cornerback Noah Igbinoghene, while Flores was a busy man in the free agency market and brought in former Washington guard Ereck Flowers and center Ted Karras from divisional rivals New England.

And the defense has been bolstered with the arrival of Byron Jones from Dallas, who is now the highest-paid cornerback in the NFL having signed a five-year deal worth a cool $82m.

Flores also persuaded the bean-counters in Miami to splash the cash to lure linebacker Kyle Van Noy from the Patriots. Van Noy turned 29 in March, yet only Fitzpatrick (37) is older on the new-look Miami roster.

Last season: It's somewhat bizarre to describe a 5-11 season as a success, but it was hailed by many as a triumph considering the Dolphins lost their first seven games.

One of those five wins was a thundering comeback against New England, which ultimately cost the Patriots a bye in the first week of the playoffs. 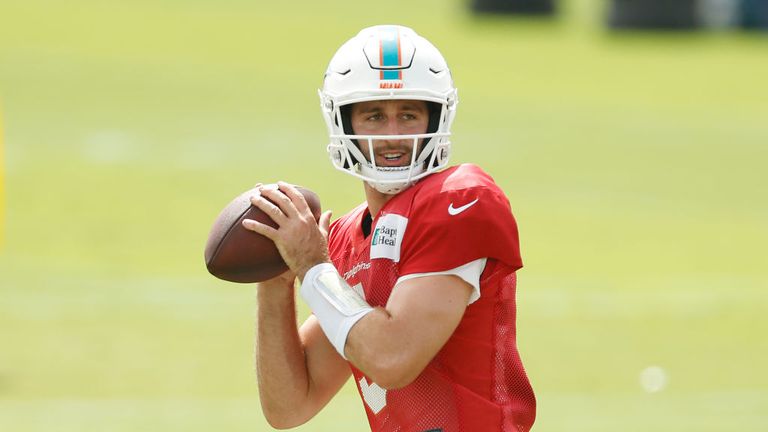 Prospects: The 2019 season was a write-off from the outset, but the youth and enthusiasm brought in by Flores over the summer tells you everything you need to know about the long-term planning at the Dolphins.

Their only discernible weakness is inexperience, but the franchise are planning for the long term and the coming season will be a huge learning curve for many on the roster.

Miami have made some astute signings in key positions, drafted shrewdly and their prospects are abundantly better than at this time 12 months ago.

Prediction: 4th (7-9). They might be propping up the AFC East, but Miami are a team on the up. It's going to be fun watching how their youthful exuberance copes with the rigours of the NFL in 2020.