What happened to Carson Wentz? From MVP candidate to broken quarterback

Once considered a future league MVP, Carson Wentz has regressed to one of the worst starting quarterbacks in the NFL; Watch 0-2-1 Eagles at 2-1 49ers on Sunday Night Football, live on Sky Sports

Through three games, Carson Wentz has arguably been the worst starting quarterback in the NFL. What has happened?

First, let's look at the numbers. We all know he has been bad, but just how bad has it been?

Put quite simply, he is not completing passes, not getting the ball downfield, not scoring, and is turning the ball over constantly. It is not pretty viewing.

But it’s also a shocking decline for a player we had expected to be in his prime at 27 years old and in his fifth season.

In 2017, Wentz was in the MVP conversation before tearing his ACL and Nick Foles famously leading the franchise to a Super Bowl victory.

Which winless teams still have hope?

There are eight winless teams in the NFL through the first three weeks of the season, but which of them still have hope in 2020?

Since then? 2018 was again ended by injury - this time a fracture in his back. 2019 was due to be the year we finally saw ‘playoff Wentz’, but a hit to his head by Jadeveon Clowney sent him to the sidelines with a concussion.

Now here we are, with Wentz looking broken and the Eagles holding an 0-2-1 record and one of the least efficient offenses in the league. Where do we go from here?

Midway through the second quarter of the Philadelphia Eagles' opening game of this season - on the road at Washington - Wentz stood in the pocket, set his feet, and lofted a perfect over-the-shoulder pass to tight end Dallas Goedert.

That 34-yard touchdown put the Eagles up 17-0. Philadelphia looked comfortable and as expected before the season, they looked like a good football team. Wentz was playing well.

Within minutes, fans were left scratching their heads.

Just past the two-minute warning, under no real pressure at all and on first down, Wentz threw his first interception of the season. The ball should have been wide towards the sideline, but it was inside, and easily picked off by Washington corner Fabian Moreau.

To start the third quarter, it happened again - Wentz to Moreau on another inaccurate throw. From there, things got ugly. Washington scored 27 unanswered points while Wentz missed pass after pass.

In Week Two, there appeared to be hope. Despite going down 21-3 early to the Rams, Philadelphia fought back to 21-16 by half-time. Momentum was on their side as they worked their way to the red zone. Then, it happened again - a back-breaker.

On first down, again without pressure and with clear turf in front of him, Wentz heaved the ball into double coverage despite there being no room to fit the ball in. Darious Williams was there for the pick.

Los Angeles went on to win comfortably, and added another interception on a casual, ill-advised toss by the lost quarterback. 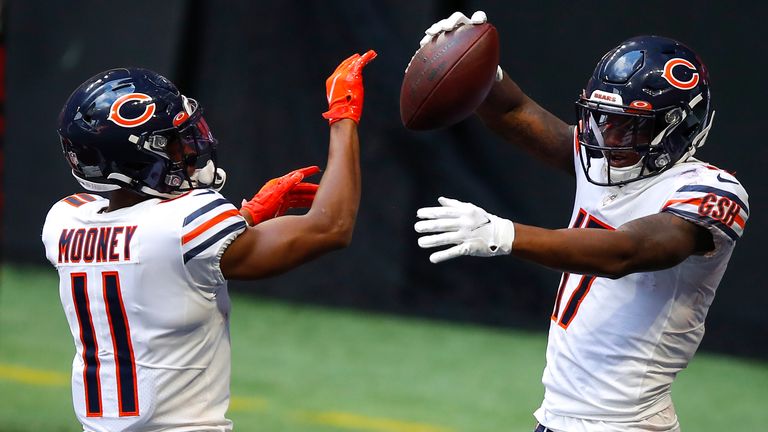 And that tie against the Bengals last week? It’s best not spoken of in Eagles circles. Wentz threw two more interceptions, both ugly. He missed a wide-open Miles Sanders for what would have been a fourth-quarter touchdown and followed that with more inaccuracies in overtime.

The Eagles don’t have a win, and Wentz is largely to blame.

What is going wrong?

As NFL Network analyst Brian Baldinger pointed out this week, there are plays to be made. The main issue is Wentz’s inaccuracy.

.@eagles have to straighten out the QB. There are plays to be made. And it’s not a pass protection issue. DougP comes out of the West Coast System. Short passes; long runs...only if the QB is accurate #BaldysBreakdowns pic.twitter.com/vW143yZyrd

Is that to do with footwork? Mechanics? Confidence? Is he nursing yet another injury, just one we don’t know about?

Does he quite simply have 'the yips'?

Is the surrounding cast an issue?

We can’t overlook the injury problems surrounding Philadelphia’s offense. Half of the projected first-team players are either out now or have missed time.

Before the season even started, the Eagles lost their starting left tackle (Andre Dillard) and right guard (Brandon Brooks). They were forced to move 38-year-old, re-signed offseason cut Jason Peters to LT, and his decline appears to have come rapidly. Left guard Isaac Seumalo was placed on Injured Reserve after a Week Two injury.

This summer was supposed to give Wentz his weapons on the outside. In came first-round pick Jalen Reagor, free agent Marquise Goodwin and two more rookies in John Hightower and Quez Watkins. Plus, veterans DeSean Jackson and Alshon Jeffery were set to return after long-term injuries.

Instead, Goodwin opted out of the season, Watkins was placed on IR, Jeffery remains sidelined, Reagor has torn a ligament in his thumb - yes, he's heading to IR too - and Jackson has played just 52 per cent of the snaps. Plus tight end Dallas Goedert has now been added to the list!

However, while yes, he would be in a better position with more playmakers around him, he has achieved great success in the past with players who aren't considered stars and the Eagles haven’t had a 1,000-yard rusher or receiver in the Doug Pederson era.

Was he ever that good?

Another question starting to emerge is quite simply, was Wentz ever as good as the hype he received in 2017? In five seasons, it’s still his only Pro Bowl worthy year and unless you can consistently prove it on the field, are you just a player with lost potential?

After throwing 33 touchdowns to seven interceptions in that breakout year - with an 11-2 record - he kept up the good personal statistics over the next two seasons (48 touchdowns to 14 interceptions and a 96.7 quarterback rating) but the team’s record dropped to 14-13.

That record is not on Wentz himself, but the Eagles haven’t rolled with the same momentum since they did in that 2017 with both Wentz and Nick Foles, and in 2018 when Foles again took over for the end of the season.

These questions have to be asked. However, he has at times played at an elite level. It is not absurd to think he can reach his previous levels of play. After all, 27 is still very young in quarterback years.

Head coach Doug Pederson said this week: “My confidence level [in Wentz] is extremely high and it hasn't changed.”

We shouldn’t expect a quarterback change in the short term. After all, this is the man they invested $128m in the summer of 2019 and realistically, it is the first time his place as the starter has been questioned.

The Final Word: Wentz in trouble, Wilson for MVP

Sky Sports' Neil Reynolds has the final word on another wild weekend in the NFL, picking out his five major takeaways...

That said, Pederson did admit he needs to “unclutter” his quarterback’s mind by simplifying the game plan and perhaps running more up-tempo offense. While it makes sense, it is arguably concerning since this duo has been together for five years.

If the Eagles do go on to lose more games over the next few weeks and lose sight of the NFC East, that’s when we may see changes. The team used a second-round pick on quarterback Jalen Hurts, and they will surely want to see what they have with him.

Is it too little, too late?

On Sunday Night Football, the Eagles travel over to the west coast to face last year’s NFC Champions, the San Francisco 49ers.

After that? It’s on the road at 3-0 Pittsburgh and a home tie against Lamar Jackson and the Baltimore Ravens. They could realistically be looking at an 0-5-1 start.

The pressure is on Wentz and Pederson to deliver and save the Eagles' season on Sunday. If not, could changes be coming in Philadelphia?