LeBron James said that he still has the jerseys sent to him by Dallas Cowboys owner Jerry Jones and Seattle Seahawks head coach Pete Carroll after both tried to tempt him over to the NFL in 2011. 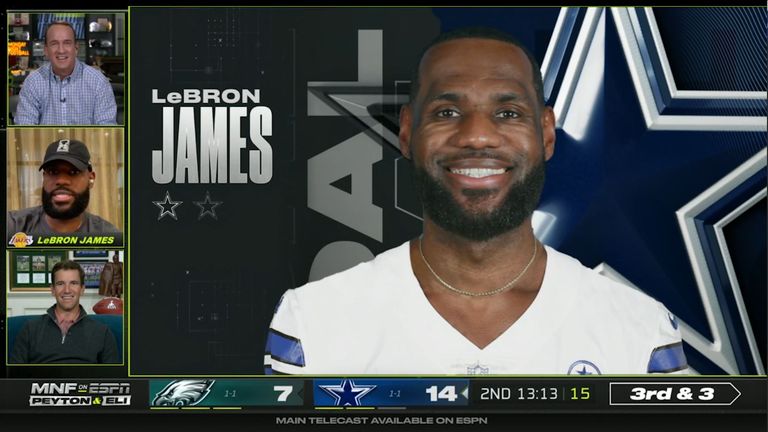 LeBron James says he 'definitely' considered offers to play in the NFL from the Dallas Cowboys and Seattle Seahawks during the NBA's 2011 lockout.

Chatting to Peyton Manning and Eli Manning on Monday Night Football, the Los Angeles Lakers star recalled attempts from Cowboys owner Jerry Jones and Seahawks head coach Pete Carroll to lure him towards a change in sport during the NBA's 2011 lockout.

A look back at James' high school footage is all needed to know that a career in football was probably there for him if he wanted it.

"Jerry Jones offered me a contract, and actually Pete Carroll in Seattle did as well during our lockout time," said James said. "Definitely got my blood flowing again, got my mind racing again about the game of football, being out there on Sundays.

"We was able to get a deal done in the NBA and I was back on the court in no time, but I definitely thought about it.

"I still got the jerseys, too, that Jerry and Pete Carroll sent me from 2011."

Standing at six-foot-nine, James arguably had the size and athleticism to be a capable tight end, with a number of college programmes including Ohio State and Notre Dame having recruited him as a receiver out of high school.

"I wanted to be a red-zone specialist, like Gronk," he added.

As it happened, James would go on to win his first NBA championship that season with the Miami Heat upon the league's labour dispute being resolved.

He has since collected three more rings with the Heat, Cleveland Cavaliers and most recently with the Lakers in 2020, is a 17-time All-Star and ranks third in NBA history with 35,367 points.