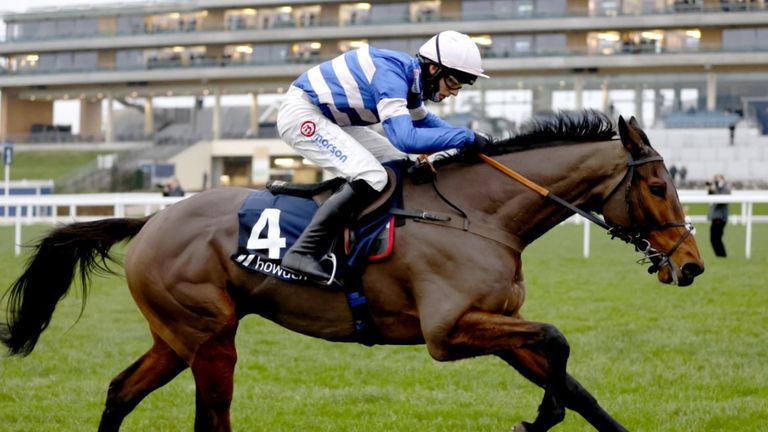 Jockey Harry Cobden said Pic D'Orhy did brilliantly to bounce back from his heavy fall at Newbury to win Ascot's Noel Novices' Chase and believes there could be a big prize for him in the spring.

Pic D'Orhy ran out an easy winner of the Grade Two Noel Novices' Chase at Ascot on Friday to make amends for his fall at Newbury last month.

Paul Nicholls' six-year-old, who threw away what looked a great chance for graded success when last on track having exited four fences out, made light work of his four opponents this time around.

Taken on for the lead early by Jane Williams' Gladiateur Allen, Pic D'Orhy produced a faultless round of jumping under Harry Cobden, while his rivals made significant errors, including a shuddering one by Gladiateur Allen as rider Chester Williams did well to survive unscathed.

A second mistake from Williams' 13/2 chance all but ended his hopes as Pic D'Orhy was left in front, chased in vain by Dan Skelton's second favourite Faivoir, with Up The Straight well back in a distant third.

Gladiateur Allen finished fourth, with Gary Moore's Fifty Ball - another to make a number of jumping errors - last of the five.

It is just a second victory over fences for Nicholls' former Betfair Hurdle winner, following up from his Ffos Las success in October. Trainer Paul Nicholls is looking at a number of spring targets for Noel Novices' Chase winner Pic D'Orhy, but Cheltenham is unlikely to be on the agenda.

Nicholls said: "He has been a bit frustrating. He has a hell of an engine. He was very good today. He just tipped in at a few, he is beginning to learn the game a little bit and he does tend to take one on a little bit - and when you are running downhill and he is a bit free, it can be problematic.

"That was his best round of jumping. He was fourth in this race last year and fell in the race before that against Chantry House, but who knows what would have happened that day? Then the other day at Newbury, he would have won had he had not fallen.

"He will be grand in the spring for those two-and-a-half-mile, two-mile-six-furlong novice chases. The Scilly Isles, the Pendil. He might not go to Cheltenham and then we'll go to Aintree. Those sort of races would suit him well.

"He is a bit bolshy and ignorant. He has a great engine and is a proper horse. Once he gets that jumping rock solid, he will win some really nice races. He jumped the last two absolutely beautifully."

Nicholls and Cobden doubled up in the following race, the last on the card on the opening day of Ascot's Christmas Racing Weekend, as Chepstow winner Henri The Second made it two out of two in the Listed Lexicon Recruitment Championship Open NH Flat Race. Under a confident Aidan Coleman, the five-year-old gelding made his own running after a low-key start with none of his rivals wanting to force the pace.

In the famous JP McManus colours, Coleman led throughout and quickened the pace off the bend with seemingly minimal effort, strolling clear to win by just under three lengths from Colonel Mustard and Conor Orr. Earlier on the card, Brave Seasca put his rivals to the sword with a fluent jumping display to land a dramatic Howden Novices' Limited Handicap Chase for Gavin Sheehan and the in-form Venetia Williams team.

Party Business and Charlie Todd lowered the colours of fancied Nicky Henderson and Paul Nicholls runners with Party Business, who landed the Howden Maiden Hurdle at 22/1.

In the opening race of the afternoon, Philip Hobbs continued his good run with Earth Lord, who took his tally to two from two for the season as he landed the Howden Conditional Jockeys' Handicap Hurdle under Sean Houlihan.