Star Of India (6/4 favourite) beats Cresta and Sonny Liston to win Listed Dee Stakes at Chester May Festival; Aidan O'Brien wins race for 7th time in last 10 renewals; watch every race from the final day at Chester live on Sky Sports Racing on Friday from 1.30pm

Trainer Aidan O’Brien continued his dominance of Chester’s Dee Stakes as Star Of India warmed up for a potential shot at the Derby with a commanding victory in the Listed contest.

Sent off as 6/4 favourite, despite significant support for main market rival Mr McCann - owned by Liverpool stars such as Jordan Henderson, Trent Alexander-Arnold and James Milner - Ryan Moore's mount tracked the pace set by Mr McCann and hit the front as the long-time leader gave way.

O'Brien's son of Galileo was stepping up to a-mile-and-a-quarter for the first time, having finished down in fifth in the Craven last time out, but showed no sign of stopping as he hit the line two lengths clear of Martyn Meade's late-rallying Cresta and the Charlie Hills-trained Sonny Liston.

It is O'Brien's seventh Dee Stakes victory in the last ten renewals of the race. Sky Bet cut Star Of India to 16/1 from 33's for next month's Epsom Classic.

Kevin Buckley, a representative of Star Of India's owners Coolmore, told Sky Sports Racing: "We were stepping him up in distance from his Craven run and Aidan was confident he'd be able to do that.

"We couldn't be happier. It was a big learning curve coming here and he answered every question categorically for Ryan. He's an absolute gent."

Asked about the Derby, Buckley said: "He wasn't stopping at the line so every indication is there. He's nimble on his feet, has got the gears and is an exciting horse to look forward to."

Freddie Meade, assistant trainer for runner-up Cresta, said: "We were pleased with him. He settled a bit better but not fully so he's a work in progress. He certainly showed he's got plenty of ability.

"We just need to get him in the right race and hopefully things will drop into place." 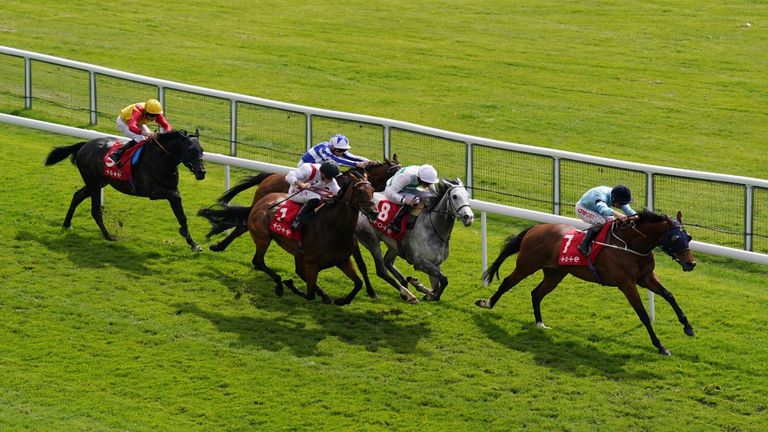 Jockey Tom Marquand paid credit to trainer William Haggas and his team after Hamish defied a penalty and a long lay-off to win the Group Three Ormonde Stakes at Chester on Thursday.

Hamish defied a penalty and a long lay-off to run out a good winner of the Group Three Ormonde Stakes.

The William Haggas-trained six-year-old appears to have had plenty of off-course issues, making to the track just once in 2020 and just three times last year.

Making his first competitive appearance since November, Hamish was a 9/2 shot under Tom Marquand, with Ralph Beckett's mare Albaflora all the rage as the 10/11 favourite, following two high-class performances in Group One company to end last season.

Franny Norton on Thunderous took the field along, but Hamish picked up well to beat the pacemaker by three-quarters of a length, with Alounak in third, John Leeper fourth and Albaflora only fifth.

Speaking to Sky Sports Racing, Marquand said: "He's done really well to win because I had to give a cheap length away turning in to go in rather than out and it can be pretty tough.

Look Out Louis rolls back the years

Look Out Louis rolled back the years to gain another success in the ICM Stellar Sports Handicap.

The six-year-old, who joined Julie Camacho from Tim Easterby in October 2020, has seemingly found a new lease of life this spring and proved his battling qualities to hold off a late run from Count D'orsay.

Winning jockey Jason Hart told Sky Sports Racing: "Julie has done a brilliant job with this horse. He's a fresh, happy horse and that's the way sprinters like to be.

"I put the race to bed turning in and felt like I was always doing enough. I did feel like I might have been chinned on the line but I always felt in control.

"Even though he's only just scraped home I think you can mark him up."

After a treble on day one of the May Festival, Ryan Moore quickly picked up where he left off with victory on Daniel and Claire Kubler's Outgate in the Deepbridge Handicap.

The 9/4 favourite settled just behind the leader Value Theory, when they reached the cutaway in the straight Moore had plenty of horse underneath him to be able to strike for home, beating Koy Koy by a length.

Daniel Kubler told Sky Sports Racing: "Sometimes you need a bit of luck and things have gone to plan today. Ryan has given him a lovely ride and hopefully was the best horse in the race.

"He ran very well at Newmarket and probably bumped into one that day. We knew he'd come on a little bit and he should be a fun horse going forward. He could drop back to seven [furlongs], we've got options."

Having finished behind Clive Cox's exciting two-year-old Kaasib on his first two starts, David Evans' well-bred son of Cotai Glory got off the mark by beating the Hugo Palmer-trained Self Praise and 11/4 favourite Blatant to win by just under four lengths.

Trainer Amy Murphy enjoyed another big winner as Pride Of America romped home in the Boodles Raindance Handicap under a front-running ride from Silvestre de Sousa.