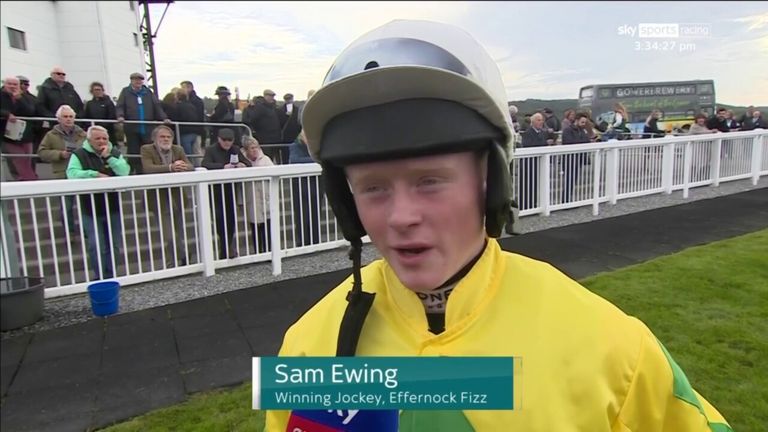 The young rider was victorious on 12-year-old veteran Peregrine Run on Saturday, delivering a power-packed ride to get the better of Tea Clipper at Chepstow.

But if that ride was all power, his Sunday best on Effernock Fizz - having her 70th career start - was all about timing, getting the fractions spot on and quickening off the front to take the £50,000 hurdle for the fledgling Irish trainer.

Ewing stacked up his rivals in behind on the seven-year-old mare, before kicking for home after the third-last hurdle and held on well to deny Milkwood and Sam Twiston-Davies who were two lengths behind in second.

Ben Pauling's Severance was sent off the 2/1 favourite but could only finish third, with 2021 winner Glory And Fortune fourth and Hardy Du Seuil the last of the five home.

A delighted Ewing couldn't hide his joy after the race, telling Sky Sports Racing: "It's brilliant to get it - I'm very thankful to everyone especially Cian and Tommy who have let me ride her today.

"She loves her racing and seems to improve for race fitness. It was a great run last week and good to go one better today.

"I picked up well from the back of the third last and second last so I thought I might have put a bit of distance between them then.

"She really stayed at it all the way to the line and tried hard. If they're all like this I'd love to come back!"