Fighting Fifth Hurdle: Constitution Hill to take on Epatante, Not So Sleepy, Tommy's Oscar and Voix Du Reve at Newcastle

Nicky Henderson's star has been rerouted to the Grade One contest, where he will take on stablemate and two-time champion Epatante, after being withdrawn from last weekend's Coral Hurdle at Ascot due to dry ground conditions.

With Gordon Elliott's Pied Piper as expected an absentee at the final declaration stage, the biggest dangers to the Henderson duo are likely to be Hughie Morrison's Not So Sleepy and the Ann Hamilton-trained Tommy's Oscar.

Not So Sleepy has an interesting history in the race, for as well as dead-heating 12 months ago he caused quite a bit of havoc the year before as he jinked and unseated at the first, carrying out Silver Streak in the process.

Tommy's Oscar, meanwhile, is reverting to hurdles after two promising starts over fences.

The Iain Jardine-trained Voix Du Reve - who has run in the last two renewals - completes the five-strong line-up. Hughie Morrison's Not So Sleepy is set to line up in defence of his Fighting Fifth title this Saturday, live on Sky Sports Racing

"The alternative [for Constitution Hill] was to wait for the International Hurdle at Cheltenham but the way the ground has been behaving down south, you wouldn't guarantee that in a fortnight's time it has changed. It's quite possible Cheltenham could be plenty quick enough.

"He's fit and well and ready to run so he's on his travels. He's in very good form.

"Last weekend was a way of keeping them apart, but I've got to look after both horses and both owners. Trainer Nicky Henderson admits it is 'not ideal' to run both Constitution Hill and Epatante in Saturday's Betfair Fighting Fifth Hurdle at Newcastle but feels he was left with no choice.

"Willie Mullins has to run about five in most races so I hardly see it as strange to have to run two.

"We're very lucky to have two Grade One two-mile hurdlers and there aren't really many races for them. There's the Christmas Hurdle [at Kempton on Boxing Day] and it's quite possible they'll both end up there. Let's see what happens this weekend." 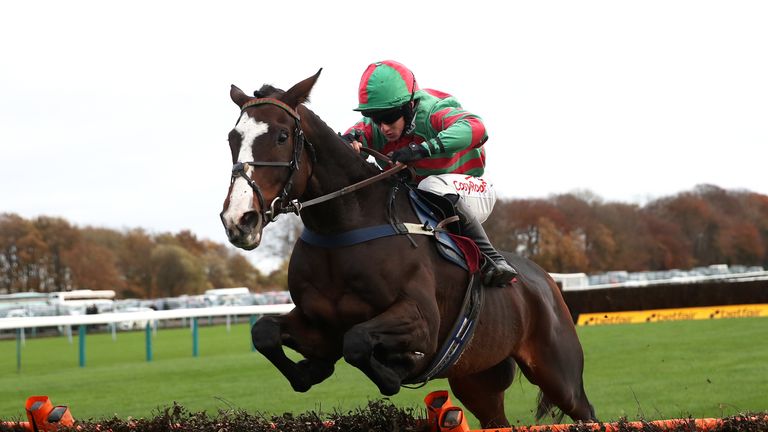 Trainer Ian Hamilton is one man not looking forward to seeing Constitution Hill in the Fighting Fifth at Newcastle on Saturday as he prepares Tommy's Oscar for the race, live on Sky Sports Racing.

Coleman: Epatante has to up her game

Aidan Coleman knows Epatante might have to raise her game again if she is to win the Betfair Fighting Fifth Hurdle for the third time on Saturday.

She was not seen again after Boxing Day until the Champion Hurdle in March, where she was second to Honeysuckle in the two-mile championship she lifted in 2020.

Brilliant afterwards in the Aintree Hurdle, the JP McManus-owned eight-year-old now has the daunting prospect of getting the better of stablemate Constitution Hill if she is to join Comedy Of Errors and Birds Nest as a three-time Fighting Fifth winner, after he was rerouted from Ascot last weekend.

Coleman will once again do the steering on Epatante and said: "It is a good race, but she is a nice mare who had a great season last year.

"She will have to be better. This is a new year and a new race and these races are very hard to win, but we will be in there trying to give it our best shot.

"They may be watering at Newcastle - it has been a mad season, hasn't it - but I'm not worrying about that."

Venetia Williams' runner was also a late absentee from Ascot last Saturday and will now have to carry 12-stone in the Premier Handicap at Gosforth Park.

Last year's winner Aye Right, who came out on top in an epic duel with Good Boy Bobby on that occasion, is included again.