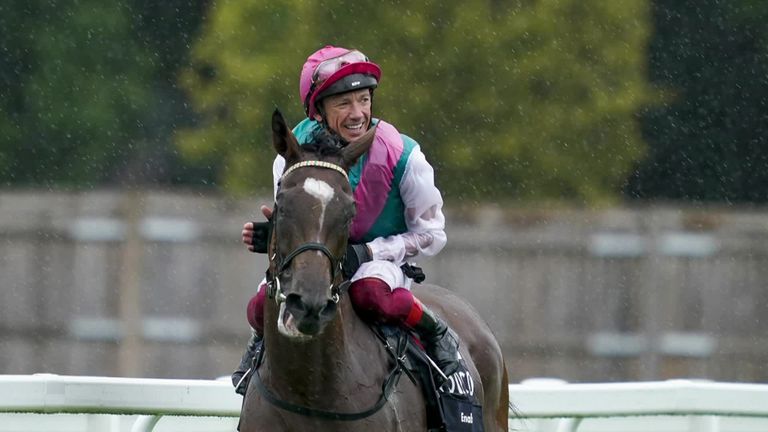 Enable made racing history with her third victory in the King George VI And Queen Elizabeth Qipco Stakes at Ascot.

John Gosden's brilliant mare became the first horse ever to win the famous race three times - and did so with ease under Frankie Dettori, who claimed a record-equalling seventh win in the race.

Only three lined up for the Group One showpiece, with Enable and jockey Dettori opposed by just the Aidan O'Brien-trained pair Japan and Sovereign.

Ridden by William Buick, last year's surprise Irish Derby winner Sovereign cut out much of the running as the rain came down - opening up a significant advantage at one stage over Enable and Dettori, and Japan under Ryan Moore.

However, it was clear rounding the home turn that the leader's petrol tank was beginning to empty - while Dettori remained motionless aboard Enable and was even able to take a nonchalant look over his shoulder to see Japan toiling in behind.

Once given her head, Enable strode clear magnificently and passed the post five-and-a-half lengths clear under her jubilant rider, with Sovereign filling the runner-up spot. 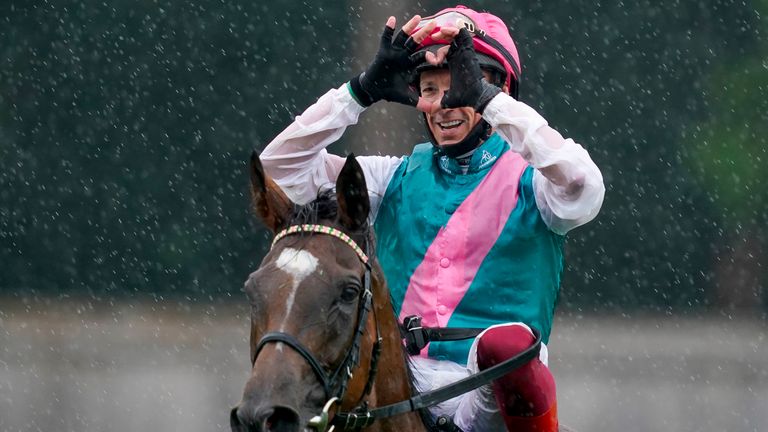 Dettori performed his trademark flying dismount in the winner's enclosure - and was visibly emotional as he reflected on the victory.

He said: "Since the Eclipse (where she was second), she has really turned a corner. Her work has been good, and her enthusiasm has been back.

"Quietly I was expecting a good performance, but I wasn't expecting her to win by five lengths against the likes of Japan.

"I'm very emotional, because I've only got her maybe for another two months, so every race is special - and I'm really going to enjoy this one.

"It's three King Georges for her, and I've joined Lester Piggott with seven wins."

Trainer Gosden said: "With (last year's Derby winner) Anthony Van Dyck not there, it was obvious Sovereign would set a solid pace, not a mad one.

"Given Japan has won a Juddmonte International over 10 furlongs, he was always going to ride him to beat us for toe, but it went perfectly.

"I'm always worried here when you get rain on quick ground, because they can lose their hind legs, but thankfully that didn't happen.

"Her work had been very good leading into this, and she was quite imperious today.

"I'd been very open that I let her come in her own time this year - she's highly intelligent, she doesn't need me to ask her too much, she brought herself here in top nick today.

"Between her training herself and Frankie training her, sometimes there's not much room for me!"

Enable looks likely to make her next appearance at next month's Ebor Festival at York, before her bid for more history in Paris.

Gosden said: "York has always been on the agenda - there are two races (Juddmonte International and Yorkshire Oaks), and we'll look at both, as we did last year.

"York could be really exciting, with an exceptional Oaks winner (Love) heading there as well."