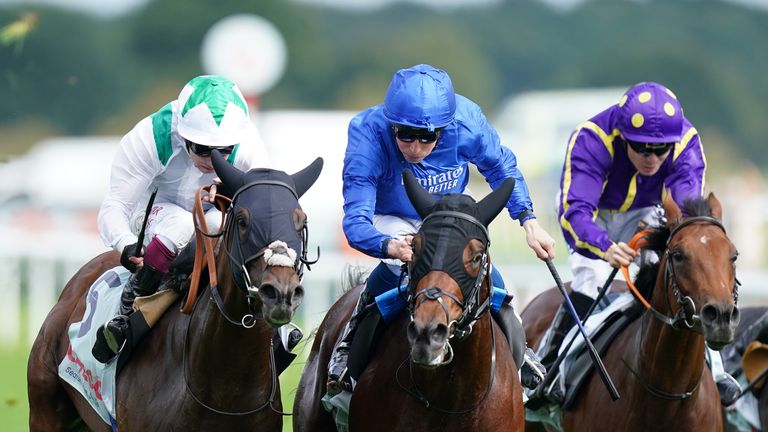 William Buick was delighted to see Charlie Appleby's Noble Truth outbattle Hoo Ya Mal to win the Flying Scotsman Stakes at Doncaster, bouncing back from a poor run in the Acomb Stakes

Noble Truth put an under-par run behind him to get back on track in game fashion in the Cazoo Flying Scotsman Stakes at Doncaster.

The Charlie Appleby-trained colt had looked a bright prospect when getting off the mark at Newmarket on his second start, only to blot his copy book when fourth behind Royal Patronage in the Group Three Acomb Stakes at York last month.

The Godolphin-owned runner showed that form to be wrong with a battling success over Hoo Ya Mal in this Listed contest over seven furlongs.

Hoo Ya Mal looked like getting up, but Noble Truth (9-1) rallied to deny the 2-1 favourite by a nose. Gwan So was a length and a quarter away in third.

"He obviously won nicely at Newmarket and disappointed the last day for no apparent reason," said Appleby's assistant, Alex Merriam.

"He settled nicely today and we're pleased with him.

"I've had a quick chat with Charlie. There are no immediate plans, but we'll stick to seven furlongs at the minute and just see where we go when we get home."

By the trainer's 2014 2000 Guineas hero Night Of Thunder, Thunder Max (16-1) knuckled down for Rossa Ryan to outpoint the more experienced Leuven Power by a neck. Unilateralism was a neck away in third place.

"He's always been a lovely colt and he was coming here for a run. He's not shown anything at home but quite often the nice horses do that," said Hannon.

"There are some lovely races in the autumn - there's the Autumn Stakes, the Horris Hill. I'm just delighted he's done that. I'd hoped he'd be a nice horse but I didn't know. He's not a flashy horse at home, but he's by Night Of Thunder and anything is possible by that stallion."