Remi Casty retires after Toulouse reach Super League: 'This was my last dance'

"This club has fought for 10 years to get into Super League. It tried in 2005 when Catalans won but kept going and I'm thrilled for the club and for French rugby league."

Former Catalans Dragons captain Remi Casty expressed his delight after helping Toulouse join his former club in Super League but insisted he would not be around to play in the 2022 French derbies.

The 36-year-old former France Test prop, who was discarded by the Dragons at the end of 2020, confirmed his retirement after Toulouse's 34-12 victory over Featherstone in the Million Pound Game, which ensured there would be two French teams in the top flight next year.

"It's over," Casty told Sky Sports. "This was the last dance and what a day for it.

"This club has fought for 10 years to get into Super League. It tried in 2005 when Catalans won but kept going and I'm thrilled for the club and for French rugby league.

Centre Mathieu Jussaume scored two of Toulouse's five tries and full-back Mark Kheirallah kicked seven goals from eight attempts as Sylvain Houles' side made it 20 wins in a row to the delight of a crowd of 9,235 at Stade Ernest Wallon.

"I'm lost for words, it's unbelievable," Houles said. "Who would have thought a few years ago we would have a packed ground for a Grand Final who help get us promoted into Super League? "They pushed the boys all the way, it's magnificent."

Toulouse led 16-0 at half-time and were forced to withstand a Featherstone fightback before clinching victory thanks to late tries from veterans Harrison Hansen and Johnathon Ford.

"In the second half, we let them come back but the boys really dug deep and managed to get some points.

"The boys have been outstanding all season, I can't credit them enough. We planned everything and when it works it's unbelievable."

Ford, a 32-year-old Cook Islands international who has been with Toulouse since 2011, says promotion will be a major boost for the 13-man code in the south of France. 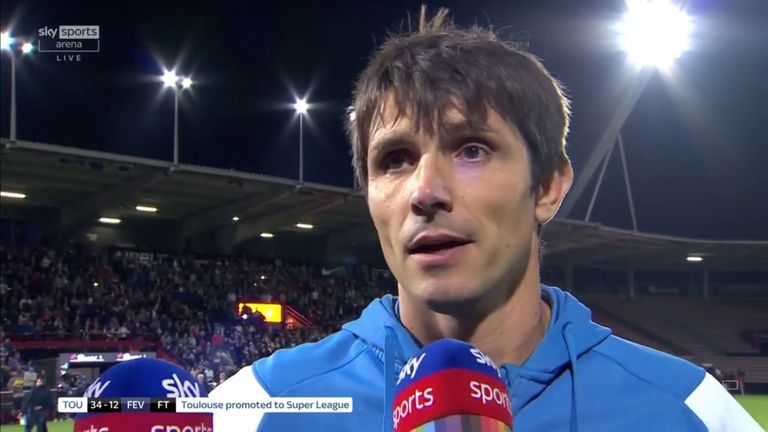 "It's one of the main reasons I hung around for so long. I'm so proud of all the players who have been a part of this. It's pretty surreal, I'm stoked."

Featherstone scored second-half tries through forwards Brett Ferres and John Davies but could not prevent a second defeat in the Million Pound Game after losing out to Toronto Wolfpack in 2019. Head coach James Webster said: "I thought we were really courageous, but well done to Toulouse who I thought were outstanding in the first 20 minutes.

"We've got no excuses. The challenge for next year will be promotion again. I think we have a superb chairman in Mark Campbell.

"It will be a strong competition again next year. Leigh will be strong, but I feel we will be up there competing again."

Webster, who was assistant to Richard Agar when he coached the French national team at the 2013 World Cup, said of Toulouse: "They will need to recruit.

"My own hope is that they play more French players to help develop the sport in France."