England women's team all have full-time jobs alongside rugby and have made huge "sacrifices" to represent their country; they get their Rugby League World Cup campaign under way on Tuesday as they take on Brazil at 2.30pm at Headingley, Leeds

Emily Rudge is hoping all the sacrifices pay off as her England women's side look to leave a legacy at the Rugby League World Cup.

Having taken over the captaincy of the side in 2018, the St Helens second row has had her sights firmly set on this tournament and will be the key experienced cog in an England team that will be looking to defy the odds and claim a World Cup victory on home soil.

However, before attention turns to the knockout stages and a potential double-header at Old Trafford for the Finals, Rudge is firmly focused on their first game against Brazil and the opportunity to play in front of a packed-out crowd.

"We are unbelievably excited to finally get going," Rudge said.

"With having a year out and the tournament being postponed, it feels like we have been waiting for this for such a long time.

"So, now that it is actually finally here, we are just really excited to get going and get on the pitch.

"We really feel ready for it now. The team having that extra year probably looks a bit different than it would have last year but it feels better than it ever has.

"To play Brazil is going to be incredible because that is the first time we will have played them and currently those ticket sales for that first game in Headingley has far surpassed any women's match in this country so hopefully that is going to smash records for how many people are going to watch that game which I think for us is so exciting."

In many ways, the World Cup will be a ground-breaking tournament for the women's game, with players being paid for taking part for the first time ever.

Despite positive steps forward, there are still sacrifices that many players have had to make, not just taking time off work throughout the tournament but their efforts week-in and week-out.

"A lot of people probably don't realise that we all have full-time jobs so we work whatever it might be in the week, then in the evenings we go to training and the early mornings we fit in training sessions," Rudge added.

"Then for England training, all the girls usually come together on a Saturday and we have a full day of training on a Saturday then we go and play a game in the women's Super League on a Sunday.

"So, it is literally every day of the week you are dedicating your life to rugby and rugby is like another full-time job on top of your full-time job.

"There is very little time outside to do anything else and the players that you will see representing England have had to make so many sacrifices."

While many will have never had the opportunity to witness her side in action, Rudge believes they have the skill and entertainment factor that can show the nation what women's rugby league is all about as they are thrust into the spotlight on Tuesday.

"As England women we are very tough, we have had to be with the way the game is in this country," she added.

"You won't see us take a backwards step, everyone will be really physical and not just that, we have got some incredibly skilful players in our team that I am so excited to see play and some for the first time who will be debuting in the World Cup. 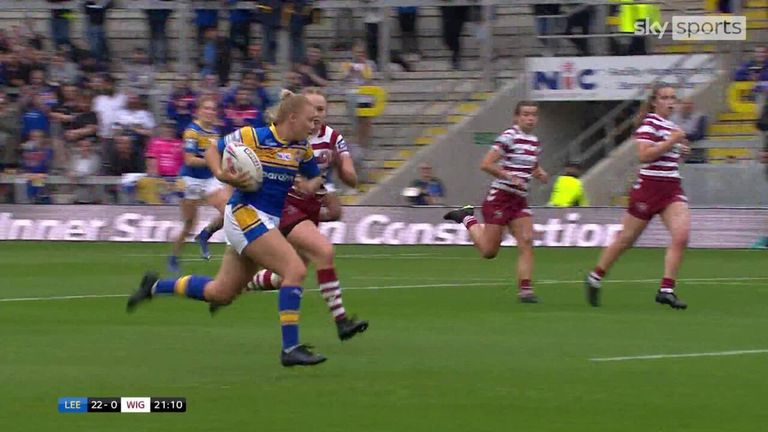 "So, really powerful players like Amy Hardcastle and then really skilful players like Courtney Hill and Georgia Roche who are fantastic for the game and for us as a team.

"Then some new faces like Holly Dodd and Fran Goldthorp who haven't had a lot of experience for England but have smashed the women's Super League this year and are in great form so hopefully they will carry that into the tournament."

While Australia and New Zealand will be tipped as the favourites for the women's tournament, Rudge has confidence her side can go all the way and will not be there to just "make up numbers".

Indeed, in a similar fashion to the Lionesses this summer, England women will be looking to, for the first time, "bring home" the World Cup.

"We will take every game as it is and when we are preparing, it will be solely focused on that next game but the ultimate goal has always been the same and we want to win this World Cup," Rudge said.

"We are not coming here and taking part and just being another team, we are here to compete and win that World Cup and bring it home for the first time so ultimately that is definitely the end goal for us.

"I think that is something that is achievable and something we will set our sights towards.

"I think it would just mean everything, not only for me but for all the girls. all our friends, all our family.

"All the time and dedication we have put to this World Cup will have been worth it and it would just be the ultimate win for us.

"Every other World Cup we have played in, we have always got beaten in the semi-final so I think that is a big hurdle to overcome and if we do overcome that, it will be so mega for us and a turning point then."