By The Associated Press

Australia's National Rugby League became one of the last professional contact sports to shut down in response to the spread of the coronavirus, suspending its 16-team competition on Monday.

While football authorities in other parts of the world bowed to government edicts against travel or public gatherings or the new reality of reduced social contact, the NRL sought to continue.

In Australia, rugby union and Australian Rules football had already suspended their competitions, not just the professional leagues but even at a community level.

The NRL, facing a possible $500m hit to its finances if the national league ceased, spent hours Monday considering alternatives to an open-ended suspension of the season. At one point it was considering moving all of its teams to the small town of Calliope in Queensland state where matches might continue strictly for television.

All sports depend on broadcasting rights but rugby league is in a tough financial position and that drove its attempts to find any means to continue, even with fans excluded from stadiums and inter-state travel restricted.

The head of the Australian Rugby League Commission, Peter V'landys, described the suspension as "catastrophic" but said the latest medical advice from government officials made it clear an unprecedented postponement of the NRL was necessary.

"Our pandemic and biosecurity experts said due to the outbreak it is no longer safe for our players to play," V'landys said.

"This decision hasn't been taken lightly. Our experts are very concerned with the rapid rate (of spread). We were alarmed at how everything changed over the past 24 hours."

V'landys said league officials were considering options to get the season restarted.

"All options are still on the table but what's paramount is the health of our players," he said. "I don't think we've ever come across a financial crisis like it."

V'landys said the NRL would survive.

"You can't understate it. It's probably the biggest challenge the game will ever face financially," he said.

"Rugby league will always survive in some way but I can't guarantee it will in the same way. We're ready for the worst." 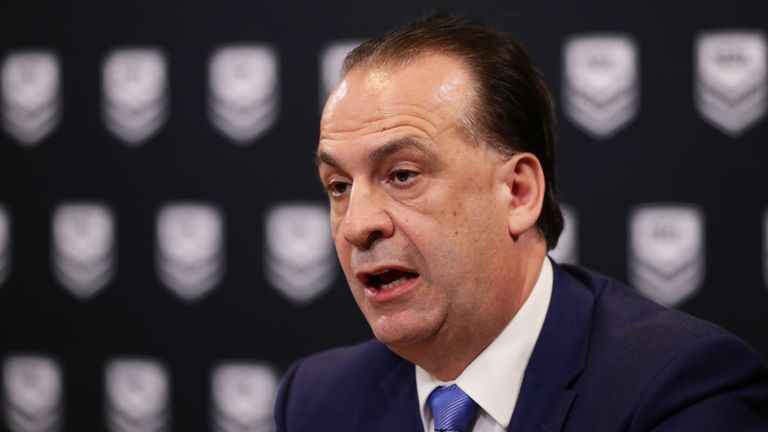 "You can't understate it. It's probably the biggest challenge the game will ever face financially. Rugby league will always survive in some way but I can't guarantee it will in the same way. We're ready for the worst."

The NRL has closed its headquarters, forcing staff to take leave.

"We've briefed our clubs and all players have been told. We've asked players to not turn up to training tomorrow," NRL chief executive Todd Greenberg said.

Australian Rules football's Australian Football League was suspended on Sunday after just one round.

On Monday all professional rugby union teams in Australia and New Zealand also ceased to train for at least two weeks, probably longer.

Rugby Australia had been considering creating a domestic competition for the teams affected by the suspension of Super Rugby but has been forced to shelve those plans in the face of the worsening pandemic.

The Reds, Rebels, Waratahs and Brumbies, along with former Super Rugby side Western Force, had been invited to form a new event after the five-nation competition was put on hold.

A statement from RA read: "The remodelled competition, which was in the final stages of approvals, had a planned start date of April 3 but has been suspended until at least May 1."

Australian soccer's A-League continued over the weekend, but is also likely to be suspended this week.