Jamaica winger Omari Caro is proud of how the team have progressed over the past decade, from having to buy his own shirts for logos to be ironed on and preparing for matches in car parks to being part of a Rugby League World Cup

As Jamaica prepare to make their Rugby League World Cup debut this year, Omari Caro cannot quite believe how far the team have progressed both on and off the field since he made his debut for them 10 years ago.

All being well, the former Super League winger will be part of the Reggae Warriors' squad for the tournament as they vie to make an impact in a group which contains one of the sport's 'big-three' nations in New Zealand, as well as Lebanon and Ireland.

He is likely to be joined by Super League stars such as Huddersfield Giants pair Michael Lawrence and Ashton Golding, and Caro's pride at the evolution of the Jamaican team is obvious from the way he talks about it.

There’s no greater honour than repping for your people. Jamaica land we love. pic.twitter.com/ikVy0KJxDH

"When I first went in 2011 to play [for Jamaica] in America, where we were compared to where we are now is unrecognisable," Caro told Sky Sports. "I don't just necessarily mean playing-wise, just the general management of the team.

"There are structures now, where it was just turn up at the airport, bring your own kit or go to Sports Direct and get a plain T-shirt and they'd iron on some badges. We were training in car parks in America before a World Cup qualifier and we've progressed massively.

"Even just attracting some of the names who now want to play for Jamaica is testament to how well we've done in the last 10 years. The progression has been really good to see and be part of, and it's something I'll always be proud of being involved in."

Although Jamaican by ancestry on his father's side, Caro was born in Hammersmith and it was the round ball rather than the oval one which first held his attention in the world of sport while growing up in London. 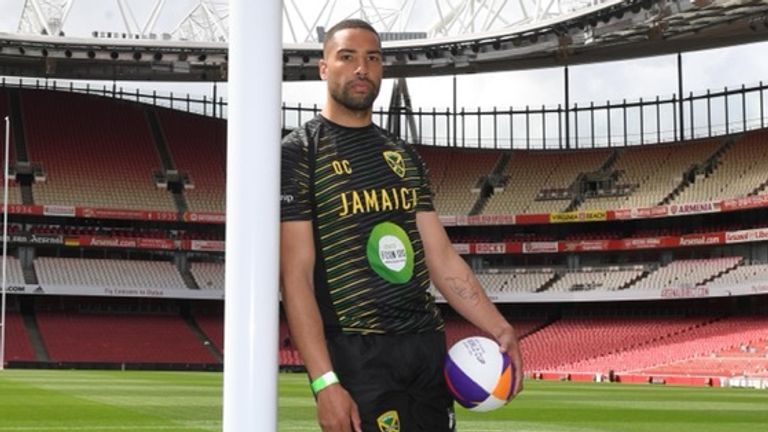 The progression has been really good to see and be part of, and it's something I'll always be proud of being involved in.

Good enough at football to be on the books of Queens Park Rangers as a youngster, his ambitions were thwarted by injury and he admits to falling out of love with the sport for a while.

However, a move to a rugby union-playing school soon led to him taking up the 15-man code and his life took an unexpected turn when London Broncos - then still under the Harlequins Rugby League banner - sent a letter to the school inviting players to their open academy trials.

Having initially planned to attend university after completing his A-levels, the teenage Caro instead seized the opportunity after impressing enough to earn a place in the U18s team, going on to play for the Broncos and then Hull Kingston Rovers in Super League, followed by a spell with Bradford Bulls.

Since 2018 he has been back in the capital with League One outfit London Skolars and, while the 13-a-side code may not quite have forced itself to the forefront of the city's sporting culture, Caro is in no doubt it is growing in prominence.

"The thing with London is you're competing with so many other sports that I guess it's never going to be first choice," Caro said.

"Football is always going to be No 1 in the capital, but the quality of player coming through the system you play against and train with - I'm 30 now and I've been involved for nearly 12 years, and where it started to where it is now has improved tenfold.

"It's only getting better. It's been a slow progression, but it's definitely on the rise in terms of the players coming through and the numbers.

"It's just about having patience and letting it grow in its right time rather than try to force it and expect everything to change in a year. I'm excited by what the next 10 years will bring."

One thing which is likely to boost the profile is one of the semi-finals for this year's World Cup being played at the Emirates Stadium, with Caro in attendance on Tuesday as the rugby posts were erected at the home of Arsenal Football Club for the first time.

"I've been here to watch football many a time, so to see it with rugby posts feels a bit surreal," Caro said. "It's like I'm in Australia at one of the big grounds over there rather than in London.

"Everyone talks about how London really needs to boom in terms of playing rugby league and developing it here, but it's really nice to see it in one of the iconic stadiums.

"The lines aren't on the pitch, but the posts are there, and it feels natural to have a big stadium with rugby posts." Without it, I wouldn't have done half the things I've done in life - and I don't just mean on the rugby field. Just the experience of the blokes I've met has been amazing.

How far Jamaica can progress at this year's World Cup remains to be seen, with the debutants likely to be battling it out with the Lebanese and Irish sides for the second quarter-final qualification spot alongside New Zealand in Group C.

Whatever happens, though, Caro will remain grateful for the opportunities playing rugby league has afforded him since he made that life-changing decision to try his hand at the sport.

"Without it, I wouldn't have done half the things I've done in life - and I don't just mean on the rugby field," Caro said. "Just the experience of the blokes I've met has been amazing.

"To cap it off with a Rugby League World Cup would be what dreams are made of, without sounding too cliche, so hopefully I get selected in October.

"I just can't wait; it's been a long year of not playing any sport and now it's finally happening. Now it's about getting prepared mentally and physically for an October kick-off."