The RFL and England Touch Association announced a formal partnership which both governing bodies hope will grow rugby for both men and women of all ages, as well as solidifying a long-standing link between the sport's full-contact and minimal contact versions

When rugby league players in South Sydney started playing touch as a way of keeping their skills sharp and their fitness levels up in minimal contact environment during the off-season, they could perhaps never have envisaged how it would evolve into a sport in its own right.

Fast forward nearly six decades and the links between the 13-a-side code and the touch variant of rugby have been further solidified following the partnership agreement formalised by the Rugby Football League (RFL) and England Touch Association (ETA) towards the end of 2021.

The RFL have long had their own touch rugby offerings and perhaps even more importantly that those aforementioned benefits, it offers a mixed version of the sport which allows men and women of all ages the chance to compete on the same terms - something which both organisations have embraced.

"We call it a sport for all," ETA chief executive Chris Simon told Sky Sports. "We're keen to work with the RFL to make sure we can broaden our disability offering at some stage.

"The big thing for touch is mixed spaces. We have almost as many females playing our sport as we do males and we've adopted a very inclusive approach over the last 12 months in particular.

"We now have a transgender policy we take through our sport, we have equality and diversity right at the forefront and we don't want to have a barrier to taking part in touch rugby.

"We see it as something absolutely anyone should be able to play."

It is not just at community level where there is that crossover though, with top-level stars like 2014 Golden Boot winner Shaun Johnson and 2020 NRL Grand Final player-of-the-match Ryan Papenhuyzen both having honed their eye-catching skills playing touch.

St Helens and England Women's prop Chantelle Crowl is another who has combined playing league with touch, being encouraged by some friends to take up the latter and playing for several clubs in the Manchester area.

Although her burgeoning career with Saints and her international ambitions are the priority at present, the player of the match in last year's Betfred Women's Super League Grand Final has enjoyed both the on-field and social sides of touch rugby.

"When I started, I fell in love with playing touch rugby," Crowl told Sky Sports. "Rugby league is my No. 1 sport and the last year has been so busy that I haven't had a chance to play touch, but it's definitely a good game and having mixed with all different ages makes it a really good sport to be in. 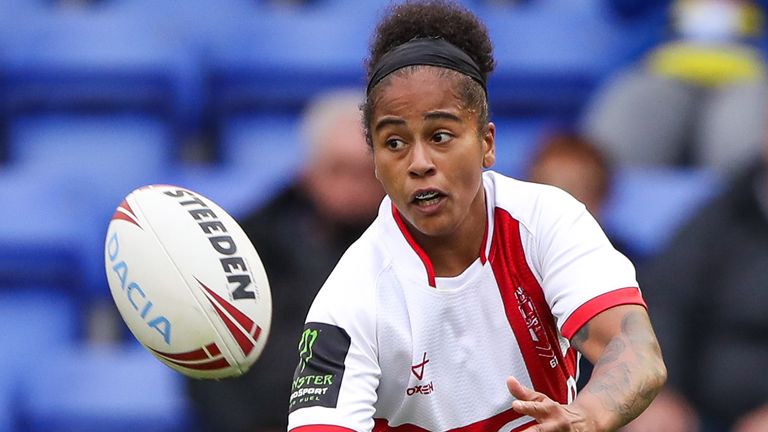 Rugby league is my No. 1 sport...but [touch rugby] is definitely a good game and having mixed with all different ages makes it a really good sport to be in.

"Skills are a big part because you're constantly passing. With your running, it works a lot on your power and speed because you're doing constant, intense sprints, but for a short number of metres until you get touched. They all mix in and it helped me a lot in my rugby league game as well.

"Both games are very similar in that aspect and it brings everyone together. Normally, if you're doing a touch competition you'll go for the full day, play about five games and maybe six if you get to the final, then everyone will mingle and have a big social after-party.

"But you just get to know a lot of new people from different backgrounds, areas and ages, so it is a very nice, social game and it's a great way to make friends as well."

Although this link between the RFL and ETA has only recently been formalised, the two governing bodies have been working closely for some time, including collaborating on return to play protocols during the Covid-19 pandemic.

Anthony Atherton, now the RFL's social and inclusion manager, served as England's high-performance director at the last touch World Cup in Malaysia in 2019 too, while Betfred Super League clubs like Wigan Warriors and Leeds Rhinos have partnered with nearby touch sides.

There will be opportunities for coaches and match officials to develop their skills in both codes too, and ETA national development officer Sammie Phillips is in no doubt both the full-contact and touch varieties will see a boost from this partnership.

"I think there's a lot of synergy between the two codes of rugby and with touch being derived from rugby league, there are lots of game similarities and transferable skills," Phillips, who came to touch after injury ended a rugby union career which had seen her represent England Students and play as winger for Saracens, told Sky Sports.

"It's enabling more people to access the sport at different levels, different ages, all genders and it's that first stepping stone into picking up a ball and chucking it around.

Why 2022 is a huge year for women's rugby league

We take a look at why 2022 is shaping up to be a massive year for domestic and international women's rugby league.

"Lots of different pathways open up from there and the access route from not playing to playing touch is a much smaller step than going straight into a full-contact sport.

"We see it very much as a way of bringing more people into the rugby family."