England kick off the 2021 Rugby League World Cup against Samoa on Saturday and we take a look at some talking points and team news ahead of the clash in Newcastle. Plus, a look ahead to the evening game between Australia and Fiji…

Wane 'desperate' to get going | Young's home from home

Shaun Wane has faced a longer than expected wait to lead England at the World Cup, but now it is finally here the four-time Super League Grand Final-winning head coach is excited to get stuck in.

The Wiganer was appointed as Wayne Bennett's successor in 2020 but had to wait until the following year to coach the national team in a match due to the Covid-19 pandemic bringing international rugby league to a halt.

Concerns over the virus led to the World Cup being postponed 12 months as well. Wane's frustration at those delays, however, is now being channelled into ensuring England kick off Group A and the tournament with a win over a star-studded Samoa at St James' Park (2.30pm).

"I've been bored for the last two years," Wane, whose side warmed up for the tournament with a 50-0 win over Fiji last Friday, said. "I am desperate for this tournament but my job as head coach is to make the complicated very simple.

"I need to prioritise what's going to help us get a win against Samoa. We performed okay against Fiji but this is a different challenge this weekend against a really good Samoan team with six players from the NRL winners.

"They've got big athletes, man for man they're 10-15 kilos heavier than us. We're not as big but we're very athletic and we have things in our game that we believe can trouble Samoa." A crowd of around 45,000 is expected at St James' Park for the match, which would make it the best-attended opening game in Rugby League World Cup history, and it will be an occasion to savour for England new boy Dom Young in particular.

Young, who coincidentally represents the Australian city of Newcastle with the Knights in the NRL, made a flying start to his international career last Friday by scoring a try and providing two assists in the win over Fiji.

Although born in Wakefield, the 21-year-old has family from the North-East who are all proud Newcastle United supporters. But while playing at the home of United perhaps does not mean as much for Chelsea fan Young, he cannot wait to be part of the match where he is set to start as one of England's wingers.

"My mum's side of the family are all from Newcastle," Young said. "It's kind of weird really, especially when I'm in Newcastle in Australia - and a lot of the suburbs have similar names as well. 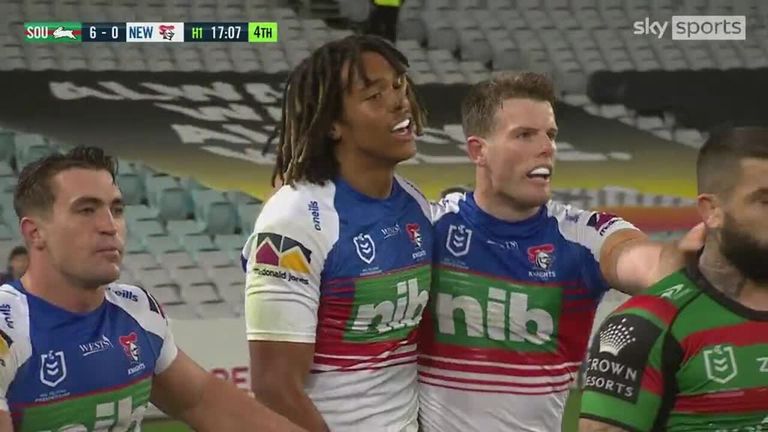 "They're all Geordies, all proud United fans, and I've been to the stadium a few times. It's massive and it's going to be a great atmosphere - you know what English fans are like."

Samoa play down expectations for opener

A quick look at the bookies' odds for Saturday's opening game will tell you it is Samoa, rather than the hosts, who are slight odds-on favourites to come away victorious.

That might come as a surprise to the casual fan, but much like their Pacific Island brethren Tonga, the Samoans have brought together a team packed with NRL talent who have eschewed overtures from Australia and New Zealand to represent the nation.

That includes five of the Penrith Panthers team who won this year's NRL Grand Final and two more from runners-up Parramatta Eels, but skipper Junior Paulo has cautioned it will not be that simple against England "That would be quite the outcome for us but it's all about preparation," Paulo said. "The boys have gelled quite well but, knowing we haven't played a lot of footy together, it's all about building that connection.

"They've a quality forward pack and in that warm-up game they certainly powered through the middle. It's a challenge we're definitely looking forward to.

"We know we've got a quality outfit and we're looking to hit the ground running this week."

Samoa have not played together since June 25 when they eased to a 42-12 victory over the Cook Islands in the mid-season internationals and head coach Matt Parish has warned not to expect the best from his side against England.

"We're under-done for the first game," Parish said. "England played a trial match while our boys were all on a plane.

"I'm confident we're going to get better as the competition goes on."

World champions Australia kick off their attempt to retain the Paul Barriere trophy against Fiji at Headingley on Saturday evening (7.30pm).

Aside from 2008, when they were beaten by New Zealand in the final, the Kangaroos have kept a firm hold on the World Cup since 1975 and are favourites to retain the title in England this year.

Head coach Mal Meninga, a player on the victorious teams in 1988 and 1992, took the step of naming his matchday 17 on Tuesday, with seven players set to make their debuts for Australia due to those who were involved in the recent NRL Grand Final being rested.

"This is an extremely strong team and suits what we are trying to achieve over the whole tournament," Meninga said.

"The Grand Final players will not play against Fiji, while a number of the players we have named have not played in weeks. It's important to give them match time as we look at our combinations.

"All of the players who will not play against Fiji will play the next match against Scotland [on Friday, October 21]."