For just the second time in State of Origin history, and first time since 2000, New South Wales scored 50 points in an Origin clash. Tom Trbojevic scored a hat-trick in the victory, while Latrell Mitchell (two), Brian To'o (two, on debut) and Daniel Saifiti registered further tries

New South Wales posted 50 points for just the second time in State of Origin history on Wednesday, as a stunning 50-6 victory against Queensland in Townsville put the Blues 1-0 up in the 2021 series.

Nathan Cleary was also flawless with the boot for New South Wales, as he kicked seven conversions and a penalty, with Mitchell adding a further conversion.

All Queensland could muster was a Kurt Capewell first-half try, and Valentine Holmes' conversion. 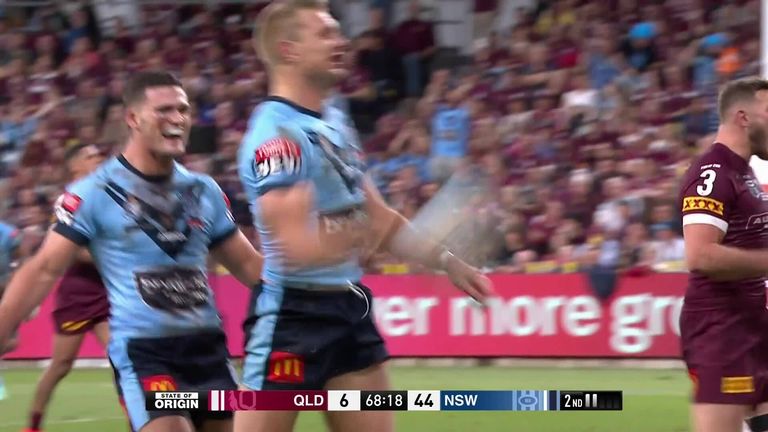 The Maroons will have a chance to show that in the second match of the best-of-three series on June 27 in Brisbane, followed by the final match on July 14 at the Olympic Stadium in Sydney.

Queensland's series victory last year was the state's 22nd win in 37 series against the Blues.

The match was moved from Melbourne to Townsville in north Queensland state 10 days ago because of a new coronavirus outbreak in the Victorian state capital.

While Trbojevic roamed wherever he pleased - from left to right, first receiver to edge finisher - Mitchell produced the moments that mattered most when the game was still alive as a contest in front of a Maroon-washed 27,533-strong crowd.

By the time Trbojevic popped up alongside Mitchell on the left edge in the 48th minute it had simply become part of the regular programming, with the Manly maestro grubbering for Mitchell to score and put to bed any thought of a Queensland comeback.

In the 15th minute, the Blues weren't so much going nowhere as backwards in a real hurry.

It was Mitchell who stood tallest, producing an audacious 40-metre bust down the touchline that was equal parts tip-toeing ballerina and brutish strength as he swatted defenders away.

Coach Brad Fittler described it as a momentum-changing moment, and within two minutes Trbojevic plated up points.

For once he was to be found in his slated right-centre position and with plenty of time and space poor old Kurt Capewell had no chance marking the Blues thoroughbred. 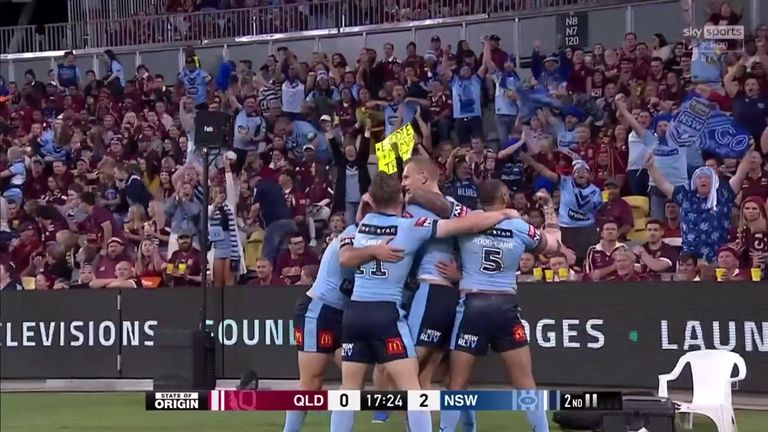 With an 8-0 advantage courtesy of an early Cleary penalty goal, the Blues doubled down when Damien Cook sprinted into the backfield.

The Maroons found themselves caught short on the left this time, with pint-sized rookie To'o making the most of his switch of sides to tumble over for a 14-0 lead.

The Blues blitz only continued when Trbojevic lobbed on the left again, looming large in the 26th minute even when he didn't get his hands on the ball.

Instead it was Tariq Sims with a bit of brilliance. Standing in the tackle of Dane Gagai, the big man piloted a ball no one thought he would - right across the face of Mitchell and a few Maroons for To'o to score untouched again. 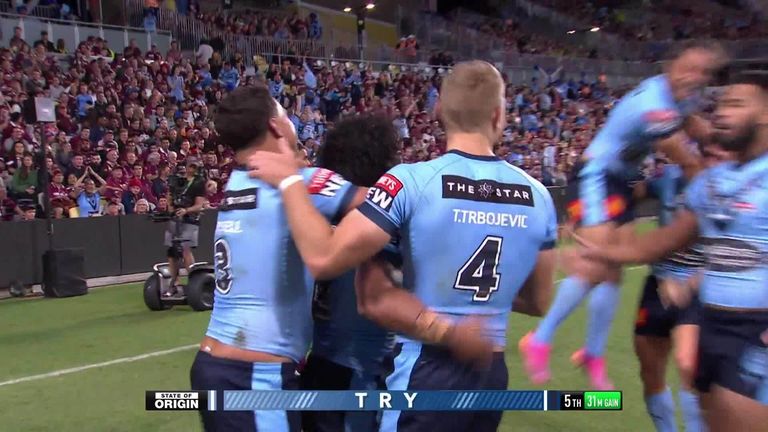 As the Maroons dropped like flies, prop and defensive leader Christian Welch failed a HIA after just 12 minutes, while David Fifita also underwent his own first-half assessment, Trbojevic's one blight gave Queensland rare cause for celebration.

Capewell was able to deliver a rare taste of Trbojevic's own medicine, some rarely seen footwork from the Panther leaving Turbo cooling his jets as the Maroons registered their first try.

From a 20-6 half-time advantage NSW simply rolled on unabated, while Queensland only managed to land themselves on report - Moeaki Fotuaika, Kyle Feldt and Cameron Munster were all cited for late, dangerous or high contact.

Mitchell's second-half double and another two support tries to Trbojevic came as debutant Jarome Luai made himself more and more at home in the Origin arena.

Cleary, meanwhile, didn't miss all night off the tee, kicking eight goals from as many attempts, while his own in-play kicking game left the efforts offered up by Daly Cherry-Evans and Munster for dead.

In the 77th minute though with the half-century raised came the play that had Fittler banging his coach's box desk in triumph.

A forlorn Queensland crossfield kick sailed its way into the arms of Xavier Coates, who had flown high above To'o with a consolation try seemingly waiting to be scored.

Waiting for him to come down to earth though sat a small sky-blue army, duly bundling Coates into touch and the Maroons truly into submission.

In three weeks' time rookie coach Paul Green has to somehow lift his side up from six feet under at Suncorp. Or the Origin shield will be travelling back south, with a couple of No.1s front and centre.

"That's the heart we needed to show. We didn't do enough of that last year," New South Wales captain James Tedesco said of his side's 2-1 series loss in 2020.

Queensland captain Dale Cherry-Evans said: "We have a lot of improvement left in us."