Huddersfield will be looking for their first win at the Halliwell Jones since 2015 when they travel to take on Warrington, live on Sky Sports Arena from 7pm on Monday

All the talking points ahead of the Super League clash between Warrington and Huddersfield as they welcome back fans for the first time since March 2020.

For the first time in over 14 months, the turnstiles at the Halliwell Jones Stadium will be turning as 4,000 lucky fans will be able to watch the action.

"It's been strange for all the players not playing with crowds especially compared to what we're used to," he said. "When I played for Hull KR against Warrington, it was always a real hostile environment and the fans were very vocal so I'm looking forward to being on the other end of that for a change.

"I know there's only going to be 4,000 there but with the way the stadium is laid out, the stands are very close to the pitch and it is very compact, it will make for a great atmosphere especially in a big game like this. The sooner we can get to full capacity, the better."

Huddersfield have struggled to get the win this season but managed to get their first victory of the season in their last Super League outing thanks to a Lee Gaskell one pointer that gave them a 14-13 triumph over Leeds.

They also showed plenty of promise in their Challenge Cup loss to St Helens and Warrington will not be taking them lightly.

"Huddersfield are a team that ask a lot of questions, the table doesn't reflect their performances especially in the last few weeks," said Wolves boss Steve Price.

"They won't be underestimated, they are a quality team and we're going to have to be right on it from minute one."

Cooper leading from the front

In the absence of Jack Walker, Mike Cooper has been named skipper for the Wolves and Steve Price says it is just reward for the way he has been playing.

"It's an opportunity for one of our own Warringtonians to be captain of our club in Mike Cooper. It's a great reward for Mike," said Price.

"He plays the game hard and tough and there's no better reward for a player at his home club, at the HJ, back in front of supporters on Monday.

"He's a pretty reserved type of guy, but deep down I know he'll be proud to captain our club. He loves Warrington and I know he's going to do a really good job for us on Monday.

"It's a special moment for Mike and all of his family."

St Helens and Salford met in the opening round of Super League with Saints running out 29-6 winners that day, however Kristian Woolf believes the Red Devils have developed from that loss. 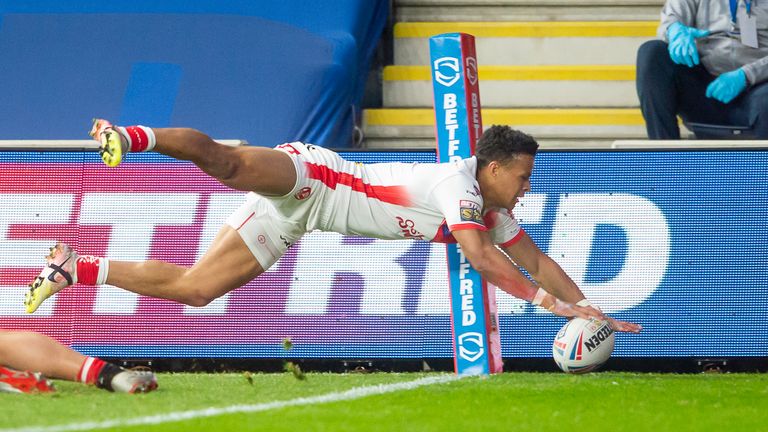 "I think what we've done a really good job of over the early part of the season and probably the most important element of how we want to play at this time of the year is our effort has been outstanding," said Woolf.

"There have been plenty of times where we haven't quite got things right, but we wanted to work really hard and got our effort right, and that's won us games. There are plenty of things we're going to improve on and we've been up and down in some areas.

"We're certainly still improving, like a lot of teams, but now they've got those seven games under their belt I expect we're going to start improving at a quick rate from here on in."

Warrington coach Steve Price expects to have full-back Stefan Ratchford back after he missed the cup win over Catalans with a foot injury while prop Mike Cooper will captain the side in the absence of Jack Hughes, who serves a one-match ban.

Huddersfield have centre Jake Wardle back from a three-match injury absence, which will enable Chris McQueen to return to the pack. It is likely to be the only change to the team that lost to St Helens in the cup.

🚨 TEAM NEWS brought to you by @delivereehfx