The Wallabies secured a deserved Rugby Championship victory over the Springboks on Sunday on the Gold Coast; Andrew Kellaway scored a first-half try for Australia, while Quade Cooper landed the conversion and seven penalties without missing, including the winner with the final kick

Quade Cooper kicked a last-gasp penalty from distance to seal a 28-26 Australia win over South Africa in the Rugby Championship, in his first Test for four years.

Cooper struck the ball sweetly from 45 metres out on an angle after scrum-half Nic White poached the ball from the last scrum in a nerve-wracking finish.

Cooper racked up 23 points in a laser-sharp performance, with Andrew Kellaway scoring the lone try for the Wallabies in the 17th minute.

The world champion Springboks scored all three of their tries from lineout drives, with Malcolm Marx grabbing two five-pointers.

Cooper was a surprising selection to face the Springboks for his first Test since 2017 after Australia were swept by New Zealand in the Bledisloe Cup, which also counted as the first two games of the Rugby Championship.

The Springboks were coming off back-to-back wins over Argentina in South Africa and had rallied from an eight-point deficit in the second half to lead the Wallabies 26-25 going into the final minutes.

But they don't win often in Australia's northeastern Queensland state, and were undone by some uncharacteristic missed place kicks. Handre Pollard missed three and Damian Willemse was unable to convert from near the sideline in the 73rd minute.

Both teams had to grind in an attritional game that featured four yellow cards - two for each team.

Australia led 19-11 at half-time, with Cooper contributing 14 points via three penalty goals and a conversion.

Pollard and Cooper exchanged penalties to make it 6-6 before momentum shifted when Springboks skipper Siya Kolisi was yellow-carded in the 16th minute for a dangerous tackle on Australian full-back Tom Banks.

The Australians scored quickly with the one-man advantage as Samu Kerevi made a break in the midfield and floated a pass to Kellaway, who stepped inside the defence on the right wing.

Pollard missed a kick in the 22nd minute and South Africa missed another scoring chance four minutes later when centre Lukhanyo Am knocked on in the tackle of Australian scrum-half Tate McDermott after chasing a kick into the in-goal area.

After being repelled in repeated phases on the try-line, South Africa capitalised in the 28th minute after Australian lock Matt Philip was yellow-carded for collapsing a rolling maul. Hooker Bongi Mbonambi dived over from the back of a driving maul to make it 13-11, but Pollard missed the conversion.

Cooper added two penalties before the break and Pollard missed another shot at goal early in the second half before Pollard landed a penalty from in front to close the gap to 19-14.

Cooper restored Australia's eight-point cushion with a penalty in the 53rd minute after Pollard was yellow-carded for a deliberate knock-on out wide with the Wallabies on attack.

But the Springboks scored two more tries via replacement hooker Marx from close-range mauls and appeared to have the edge until the late penalty. 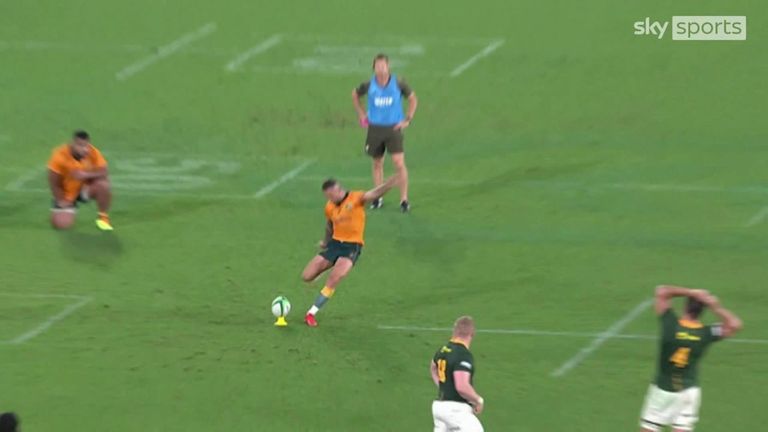 New Zealand lead the Rugby Championship with 15 points from three big wins. The next double-header is in Brisbane next Saturday, when Australia and South Africa meet in a rematch and New Zealand play Argentina again, both live on Sky Sports.