Ali Carter received a standing ovation as he made his return to big-time snooker in Coventry but was well-beaten by Australian former world champion Neil Robertson.

The 35-year-old from Essex was diagnosed with lung cancer in May and has pushed his body through punishing sessions of chemotherapy and major surgery.

However, he was back on the baize at the Champion of Champions tournament at Coventry's Ricoh Arena.

Despite the cheers from the crowd, he was unable to make a winning return against Robertson, as breaks of 111 and 106 in the second and third frames helped the Australian to a convincing 4-0 success.

Robertson went on to beat Ricky Walden 6-3 in the Group 3 final.

Carter told ITV4 afterwards: "It was the right result really, Neil was always going to be a a tough opponent.

"I got a great reception and have had great support from World Snooker and all the players. Today was all about being here and getting it out of the way.

"I left my suit at home...forgetting it did me a favour because I was worried about looking a right state out there, which took my focus off the occasion.

"I didn't feel comfortable in the first couple of frames but after that I thought I could play well." 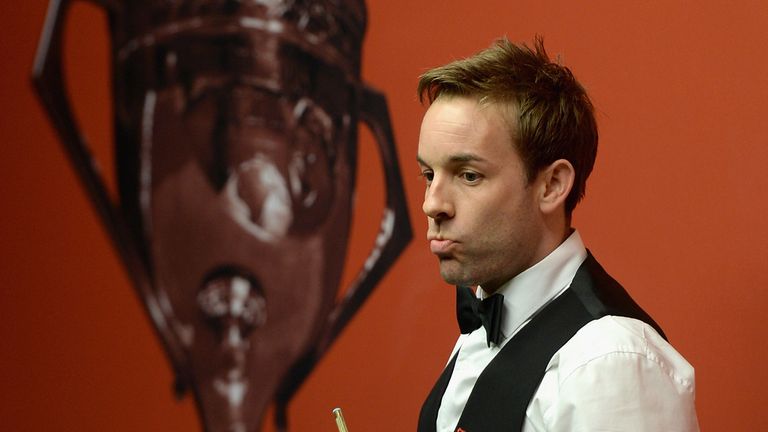 I got a great reception and have had great support from World Snooker and all the players. Today was all about being here and getting it out of the way.

On his health situation, Carter added: "I decided to have an operation to burn away the remaining part of the tumour and that has done the job - but it took me a long time to recover, the mental effects catch up with you.

"I've got the all clear but it's only month by month and they keep you under close surveillance for the first year. I'm up all night and can't seem to relax - it's a difficult time at the moment."

Carter, who will play his first full ranking event in this month's UK Championship, was grateful his ranking was frozen by World Snooker.

He added: "I've got a bit of catching up to do - but I'm not worried about that. When I was diagnosed I thought I was going to die, snooker was so far from my mind then. But I'm looking forward to getting back to my best."

Walden had also enjoyed a 4-0 win against Mark Allen to progress in the afternoon but Robertson had too much for him in the evening session.

The Chester potter had led 3-2 but Robertson got it level and the momentum switched as the seventh frame went to the black and Walden went in off to hand it to the Australian.

Robertson then claimed the final two frames to set up a semi-final against Judd Trump.

"The match started off very well, both players looked in really good form carrying over from our earlier matches," he said.

"The match got a little bit scrappy in the sixth or seventh frame. Maybe Ricky just showing a few signs of tiredness after his big win in China last week."