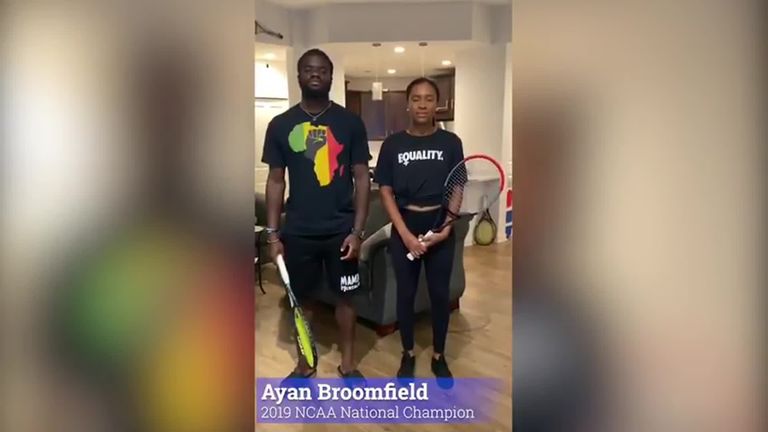 Serena Williams, Naomi Osaka, Coco Gauff, and Frances Tiafoe are just some of the names who have joined forces and voiced outrage over the death of George Floyd.

Floyd died last Monday after a white police officer held him down by pressing a knee into his neck until he stopped breathing in Minneapolis in the United States.

Serena Williams tweeted Nike's powerful 'Don't Do It' video along with the message: "Don't pretend there's not a problem in America".

Wearing a black hoodie, the 16-year-old raises her hands as the words "Am I next?" are shown on screen

I can’t and still can’t find the words to say or express how sad I feel.... but she found them for me. She found them for so many of us. A lot of us are numb... lost for words... I know I am. This is a difficult time. A lot of us growing up were taught to pray “Let thy kingdom come,” this is what I continue to pray for in addition to so many that have been hurt/killed, or simply traumatized by how people of a different color are treated. The worst part is this is nothing new, “it’s just filmed.” I’m with a heavy heart. I’m lost for words. Video from @wealth

Frances Tiafoe started a initiative called 'Racquet down hands up' to spread awareness against racial discrimination around the planet.

Players, coaches, and officials from past and present including Serena Williams, Heather Watson, Sloane Stephens, Jo-Wilfried Tsonga, Gael Monfils, Osaka and Gauff and her father all joined hands with Tiafoe to send a strong message and inspire others to not turn their back on racism.

"Enough is enough. 'Our lives begin to end the day we became silent about things that matter' Martin Luther King Jr. Thank you to everyone that joined us in this, it starts with each and every one of us," Tiafoe wrote on Instagram.