Australian Open: Danielle Collins opens up about rediscovering her best form after endometriosis

Danielle Collins underwent surgery for endometriosis last year; the American recovered in time to play at the French Open before winning WTA titles in Palermo and San Jose; Now she is through to the Australian Open semi-finals 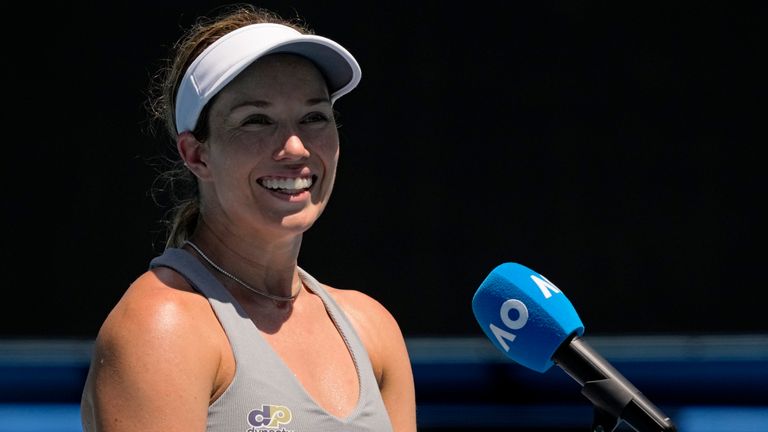 Danielle Collins says she is able to live her "best life" again after rediscovering her best form since surgery last spring for endometriosis, where she had a cyst the size of a tennis ball removed.

Collins defeated Alize Cornet, pulling away after a tight first set to win 7-5 6-1 to make it through to the Australian Open semi-finals on Wednesday.

It is a second Grand Slam semi-final for the 28-year-old American, who also reached the last four in Melbourne back in 2019.

Collins has previously spoken about her wish to one day start a family, which is one of the reasons why she underwent surgery for endometriosis last April.

Remarkably, she recovered from going under the knife to make it to Roland Garros in time for the French Open, where she won two main draw matches before going out to Serena Williams.

"When so much of the advice you've gotten over the years, certainly the advice that I had got over the years, is that painful periods are normal, taking anti-inflammatories on a regular basis is normal, I felt like it was something that I just had to deal with," she said after her quarter-final victory in Melbourne.

"It finally got to the point where I couldn't deal any longer with it physically or mentally. Once I was able to get the proper diagnosis and the surgery, I feel like it's helped me so much - not just from a physical standpoint but from a mental standpoint.

"When you're dealing with that type of physical pain multiple weeks out of the month, you're not putting yourself in a position to be able to perform consistently and to be at your best, whether as an athlete or a person."

Collins, who will take on Iga Swiatek for a place in Saturday's final, was late turning professional after going to college in the United States but does wonder what she could have achieved on court with an earlier diagnosis.

She said: "I do think had I had the diagnosis a little bit earlier, it certainly could have benefited me. But it's just one of those things that didn't happen, so now it's great that we know what was going on, we were able to go in surgically and fix it. Now I'm able to live my best life and be able to feel like a normal person."

Endometriosis explainer and how Collins opened up on diagnosis

Collins took to social media to announce why she was undergoing surgery for endometriosis, which is a condition where tissue similar to the lining of the womb starts to grow in other places, such as the ovaries and fallopian tubes.

The American, who reached a career-high No 23, has suffered with it since graduating college in 2016, and she now has high hopes to destigmatise any kind of discussions around women's menstrual cycles.

Speaking at Roland Garros last year, Collins opened up about her experiences, saying: "I think it's something that sometimes when we're dealing with these painful moments, we learn to accept it. And for me, things started to become too abnormal and really unhealthy, and it was causing a lot of havoc for me around that time.

"I also interestingly enough had some injuries pop up during that time, and so I think that maybe the endometriosis had something to do with that, just the hormonal like fluctuation. It certainly presented its challenges, but it's been really kind of shocking, since surgery I've just felt so much better, especially with my back pain. I'm not having any type of sciatic nerve pain, which I was dealing with for a couple of years.

"I consulted with my doctors and kind of had some misdiagnoses along the way. And so now I'm just kind of relieved to just be feeling good consistently and not having to always be like, 'Oh, like is this going to be a bad week? Do I have to kind of prepare my training around that or my tournaments around that?'"