Ashleigh Barty won her first Grand Slam title on clay at Roland Garros in 2019 and followed it up on grass at Wimbledon last year; Now she has become the first Australian woman since Chris O'Neil in 1978 to win the singles title on home soil 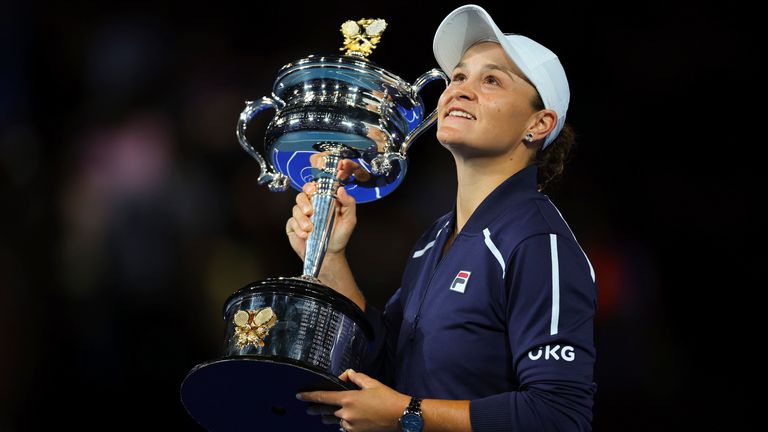 Ashleigh Barty made history on Saturday by becoming the first Australian woman to win the year's first Grand Slam in 44 years.

The world No 1 ended decades of hurt with a memorable victory, recovering from 5-1 down in the second set to clinch a 6-3 7-6 (7-2) victory over first-time major finalist Danielle Collins and claim her third Grand Slam title.

Victory for Barty saw her become the first homegrown player to lift the Daphne Akhurst Memorial Cup since Chris O'Neil in 1978 as well as becoming the only active player other than Serena Williams to have won major titles on three different surfaces.

Barty now just needs the US Open to complete a career Grand Slam having won the French Open in 2019 and Wimbledon last summer.

Fittingly, she received the trophy from her mentor, Evonne Goolagong Cawley, who won the title four times in the 1970s.

Barty said: "First and foremost, I have to say congratulations to Danielle and your team. I know you'll be fighting for many more of these in the future.

"To my team, wow. I said numerous times I'm so lucky to have so many people here that love and support me. We started right together from the start in the second part of my career. I love you guys to death, you're the absolute best in the business.

"As an Aussie, the most important part of the tournament is being able to share it with so many people. This crowd is one of the most fun I've ever played in front of.

"You brought so much joy, you relaxed me and forced me to play my best tennis. This is just a dream come true for me and I am so proud to be an Aussie."

This was a huge occasion for Australian sport and among the crowd were two people who could put themselves in Barty's shoes - Sydney Olympic heroes Cathy Freeman and Ian Thorpe - as well as Hollywood star Russell Crowe.

Barty, roared on by a partisan home crowd on Rod Laver Arena, started in confident mood against Collins, a two-time NCAA singles champion at Virginia.

Having saved a break point in the fifth game, Barty landed the first blow of the final as the American wilted under intense pressure, landing a double fault to hand the No 1 a 4-2 lead.

Barty consolidated the break before serving out the set with a hold to love, moving halfway to a place in the history books.

Collins only turned pro in 2016 but she came into the match having won their most recent head-to-head match at the Adelaide International last year.

Having rallied from a set down twice already in the tournament, the 28-year-old made a positive start to the second set by breaking Barty's momentum for a 2-0 lead.

The 27th seed saved two break-back points on her way to holding in the next game before Barty got on the board in the fourth game. However, her game appeared to be disintegrating fast with Collins' roar reverberating around Rod Laver when she moved into a 5-1 lead and producing the first-strike tennis.

But in a remarkable turnaround, Barty rallied to win the next four games in a row to level things up at 5-5 as her movement returned in a big way.

The American stopped the rot with a vital hold of serve in the 11th game, although Barty responded to send a dramatic second set into a tiebreak.

Roared on by an 80 per cent capacity crowd, this was an opportunity Barty was not going to let go. She raced into a 6-2 lead before clinching her third Grand Slam title with a stunning forehand winner.

It's been a fabulous fortnight for Barty at Melbourne Park, winning the title without dropping a set, losing 30 games in seven matches.

Collins paid tribute to Barty in a classy runners-up speech, saying: "First I think I owe a big congratulations to Ash on a phenomenal two weeks and a phenomenal couple of years.

"I really admire you as the player you are and the variety in your game, hopefully I can implement some of that in mine."