Andy Murray was unable to be the hometown hero again as Great Britain went down to an agonising defeat against the USA in their Davis Cup tie in Glasgow which ended at 12.58am; GB will likely need to beat the Netherlands and Kazakhstan to reach the final eight in Malaga in November

Andy Murray and Joe Salisbury fell to an agonising doubles rubber defeat as Great Britain went down to a 2-1 loss against USA in a tie which ended at 12.58am at the Emirates Arena in Glasgow.

Dan Evans lost the first rubber to Tommy Paul before Cameron Norrie scrapped to a gutsy win over Taylor Fritz to send the tie to a deciding doubles rubber.

But Andy Murray and Joe Salisbury were unable to delight the home crowd and they eventually fell to a late-night defeat to Salisbury's US Open-winning partner Rajeev Ram and Jack Sock as USA claimed an opening win in Group D.

A sombre start to the tie reflected the period of national mourning following the Queen's death, with the usual music replaced by a lone piper and a minute of silence before the national anthems, while the British players and support team wore black ribbons.

Murray and Salisbury were given a huge ovation as they stepped out for the deciding rubber at 10pm against Sock and Ram.

The British pair edged a long opening set and then looked in command at 3-1 up in the second set but Ram and Sock hit back strongly, winning five of the next six games to level the match.

As the clock ticked well beyond midnight, more and more fans began to leave, but a sizeable number saw it through to the end, which came at 12.58am when Ram and Sock clinched a 5-7 6-4 7-5 victory to hand USA victory in the tie.

He made a very unpromising start, quickly losing the first set, and, after seeing an early break disappear, was hanging on for much of the second set.

But he managed to force a tie-break, seize his chance in that, and then serve it out at the second attempt.

Norrie, whose Glasgow-raised father David was among the crowd, said: "Honestly I owe it all to the crowd, you guys were amazing. I wasn't playing my best tennis, Taylor came out firing.

"I managed to hang in there in the second set, I played well in the tie-break and hung tough in the third set again. I loved the atmosphere, it's just great to be back in Glasgow.

"I knew what I had to do, I had to come out and get a win for the team and I managed to do that."

Evans was twice a break up in the opening set but was under pressure in every service game and Paul responded straight away on both occasions before clinching his fourth set point.

Evans received a warning for swearing but hit back well in the second, serving better and securing the only break in the fifth game.

Paul looked to have made the decisive move when he broke for 5-3 but Evans hit back, finishing off a terrific point with a brilliant lob.

The 32-year-old was again unable to hold his serve, though, saving two match points but netting on the third. 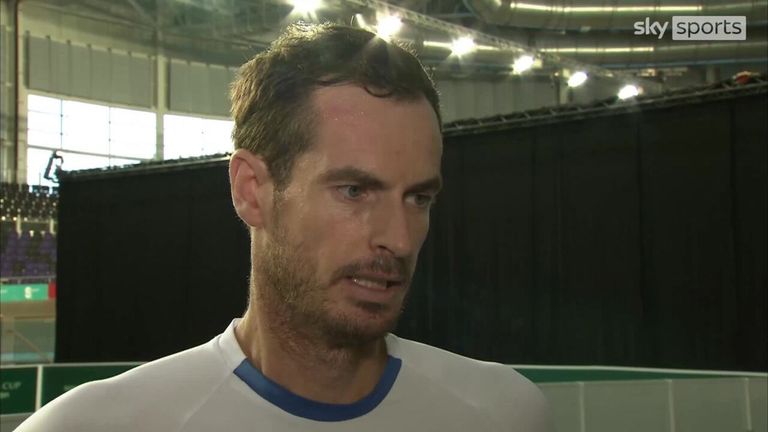 Evans said: "It was a good match. I probably lost the match in the first set. Very slow court. It took a lot to get used to the balls.

"All credit to Tommy. I thought he served well when I had my chances. It's a tough one. But another good effort I guess. That's Davis Cup, isn't it? They're all tough matches. We knew this one was going to be tough. It certainly proved to be for me. I played good tennis. Just couldn't get over the line."

What's next for Great Britain?

The result leaves Leon Smith's team almost certainly needing to beat the Netherlands on Friday (15:00 BST) and Kazakhstan on Sunday (14:00 BST) to reach the last eight shootout in Malaga in November.

There are a total of 16 nations aiming to qualify for the Finals - being held in the Andalusian city from November 22-27 - by finishing in the top two places in their group.

Wednesday's ties in the other groups all saw victories for the home teams, with Italy defeating last year's finalists Croatia, Germany edging past France, and Spain, minus rested US Open champion Carlos Alcaraz, beating Serbia.

Novak Djokovic had been due to feature for Serbia but withdrew for personal reasons, while Rafael Nadal is sitting out this stage.