Andy Murray too classy for Santiago Giraldo at Miami Open

Andy Murray booked his place in the fourth round of the Miami Open with a consummate 6-3 6-4 victory against Santiago Giraldo.

Murray, who suffered a surprise defeat to the Colombian, ranked 31st in the world, in straight sets at last year's Madrid Masters, gained revenge to move to within one win of a landmark 500 tour-level career victories.

The 27-year-old would become the ninth active player to record a half century of wins should he beat South Africa's Kevin Anderson, who defeated Leonardo Mayer from Argentina in straight sets.

Murray, who holds a 3-1 winning record against Anderson, expects a tough encounter when they clash for a quarter-final spot.

"He lives in Delray Beach just down the road so I practice with him sometimes in Miami," Murray told Sky Sports. "He's obviously used to the conditions and lives only 45 minutes away so it will be a tough match.

A tentative forehand by his opponent from Pereira landed in the net to hand Murray a break point opportunity in the fifth game and the Scot gratefully accepted his chance after pulverising a feeble second serve.

Murray, who is chasing a hat-trick of Miami titles, closed out the set in aggressive fashion on his fourth set point. 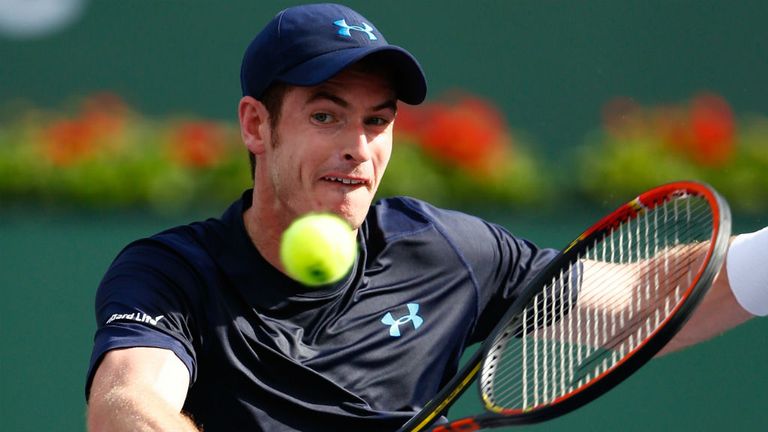 He's obviously a big server and he's a big guy as well (at 6ft in) so it's always tough against him.

The former Wimbledon champion made an immediate break at the start of the second set and then again in the third game thanks to an unreturnable crosscourt backhand.

Giraldo saved two match points before breaking Murray for the first time by letting loose with winners from all angles.

The Australian Open finalist soon put an end to Giraldo's revival by closing out the match on his next service game after one hour and 24 minutes of action.

"I felt like I played a good match," world No 4 Murray said. "When he started really going for it at the end I lost my timing a bit but I managed to close it out at 5-4."

Against Anderson, Murray has three wins from four matches, the last in Valencia last year.

"He's obviously used to these conditions here. He lives 45 minutes away, so he plays and practices in this weather a lot," Murray said. "I won't have as much of an advantage against him as maybe some of the guys, because he's used to the conditions here. It will be a tough match."

If you're not a Sky Sports subscriber you can still watch the tennis live with a NOW TV Day Pass for just £6.99