Coric to take on Novak Djokovic in Sunday's Shanghai Masters final - live on Sky Sports Action from 9.30am

Coric produced an immaculate display to come through in straight sets against the 20-time Grand Slam champion, 6-4 6-4 and record his second-straight win over the Swiss great.

It was the first match since his 2015 Halle semi-final win over Ivo Karlovic in which Federer has failed to create a break point opportunity.

Federer was forced to battle through the first three matches of his title defence, first to Daniil Medvedev, then Roberto Bautista Agut before overcoming Kei Nishikori to reach the last four.

The highly-rated Croatian, who upset Federer to win his first tour-level grass-court title at the Gerry Weber Open in Halle earlier this year, was proving a much tougher obstacle. 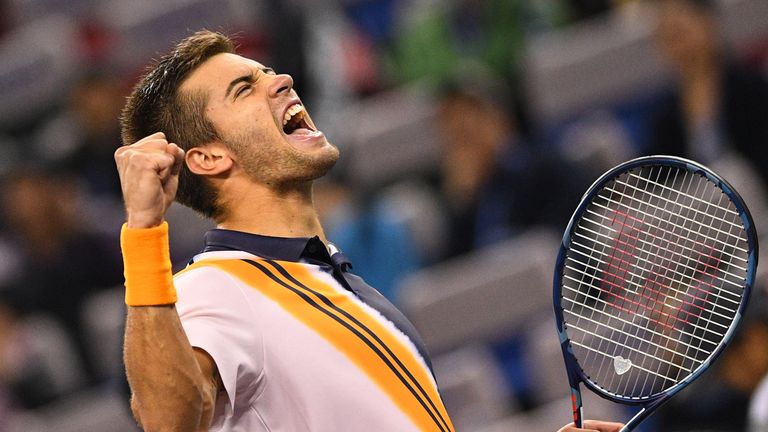 Spectacular - that was the best tennis I have ever seen Coric play from start to finish. There were no lapses of concentration. He struck the ball beautifully and there wasn't much Federer could do. He looked a little bit slow but we have to give a lot of credit to what Coric did tactically. There were no weaknesses there.

The 37-year-old found himself an early break down before finding some rhythm on the fast surface of the Qizhong Forest Sports City Arena, but the 13th seed was playing tennis at an exceptionally high level - losing just five points on serve - as he held his own to seal the opening set in 34 minutes.

Coric had Federer in a hole midway through the second set as another break put the 21-year-old in control of the match.

He stayed cool to pass Federer with a stunning forehand to claim a superb victory to take his place in Sunday's showpiece where he will take on Novak Djokovic, who leapfrogged Federer to No 2 n the world rankings after thrashing Alexander Zverev 6-2 6-1.