Novak Djokovic says he does not feel annoyed by lack of fan support when facing biggest rivals Roger Federer and Rafael Nadal in major finals.

It has often been suggested that Djokovic gets infuriated as well as galvanised by overwhelming support for Federer and Nadal when he locks horns with them on the ATP Tour.

But the newly-crowned Australian Open champion offered a different view when he faced the media in his home town of Belgrade on Tuesday.

"I've read a lot of stuff suggesting that I am disliked but I really don't have that impression, especially off-court," Djokovic told a news conference at his tennis academy in the Serbian capital.

"Even if that was true, why would I want to add fuel to the fire?

"I don't want to stir up negative emotions. I have no ill feelings for people who don't support me. Having said that, I am not proud of my occasional reactions on the court as my passion gets the better of my self-control at times.

"I will always admit that I do make mistakes and I always try to learn from them. You reap what you sow and it is never my intention to generate bad energy." 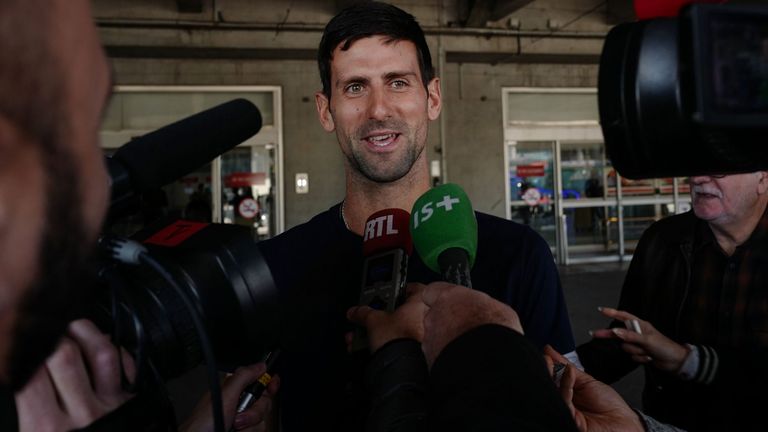 Djokovic conceded that there were places in the world where he has less support than in others.

"It is a fact that most fans support Federer and Nadal against me but that's due to what they represent in world tennis," he added.

The atmosphere was in stark contrast to last year's Wimbledon final, where Djokovic forced Federer into submission after five dramatic sets despite raucous fan support for the Swiss legend, who has won a record 20 Grand Slam titles.

Djokovic revealed how he snatched victory from the jaws of defeat in the face of adversity on Wimbledon Centre Court.

"When they chanted 'Roger, Roger' I willed myself into believing they were chanting 'Novak, Novak'," he said.

"Sometimes it does give me an impetus. But honestly, I do prefer having the crowd on my side. Where would you rather be, in a place where 10,000 fans are with you or against you?"

Check our news, reports and reaction from all major tennis events by following us on skysports.com/tennis, our app for mobile devices & our Twitter account @skysportstennis.