“For [Andy] it will be an important event to see where his game is at,” says Jamie Murray, who has organised the six-day tournament which features Britain's top-ranked singles and doubles players 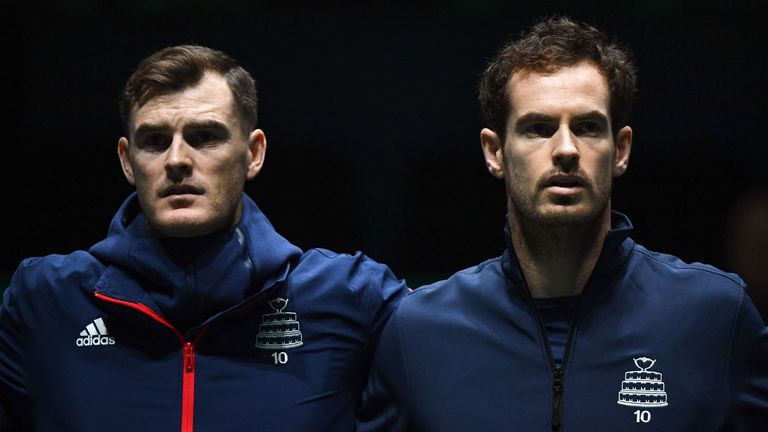 Andy Murray will be putting his "reputation" on the line when he makes his long-awaited return to action at the ‘Battle of the Brits’ on Tuesday, says his brother Jamie.

The former world No 1 has not played since he struggled with a bruise on his pelvic bone at November's Davis Cup Finals in Madrid.

Britain's top-ranked men's singles and doubles players will compete across six days at the National Tennis Centre in Roehampton, with the hope to raise upwards of £100,000 for NHS Charities Together.

"For him it will be an important event to see where his game is at," Jamie Murray, who has organised the event, told Sky Sports.

"He has obviously not had a competitive match for maybe seven or eight months, so it is a long time.

"From what I have seen over the last couple of weeks he has been training hard with the other boys. I know he is excited about it.

"Everyone is putting their reputation on the line - he has got the biggest reputation out of everyone so there will be a bit of performance pressure on him to kind of show these boys that he is still the top dog."

'The players are really fired up for the event' The three-time Grand Slam singles champion has been drawn in the "Henman Group" alongside Kyle Edmund, Liam Broady and James Ward.

"I know that the players are really fired up for the event," Murray, who will be playing alongside regular doubles partner and Davis Cup team-mate Neal Skupski, said. "Nobody wants to lose to each other!

"There has been a great sort of energy, intensity to the practices at Roehampton over the last couple of weeks. It has been really good fun to be honest. Everyone is preparing it as best they can for the tournament.

"The fact that there aren't fans there in the stadium [and] because there is so much riding on it for the players, that energy and intensity will come across well on the TV."

Schroders Battle of the Brits: Order of play

With the series of grass-court lead-up tournaments and Wimbledon cancelled this year due to the coronavirus pandemic, Murray believes his brand-new event will provide British fans an intriguing insight into the players' different personalities.

"They will see the players almost competing in their natural habitat or environment," he said.

"You have to remember that this is the first time this generation of players has actually had the opportunity to come together and compete against one another. It is very unique in that regard.

"People always get excited when two Brits face off at a regular tournament because there are so few of them, especially in singles, competing at the top level.

"Forever it was Tim [Henman] and Greg [Rusedski] and they stopped and then it was Andy. Recently, Kyle has been up there a bit, Dan Evans is obviously doing really well but it has basically been Andy for the last 10 years, longer now.

"I think the fact that we have got them all together now competing against one another, see all the match-ups is going to be cool!"