Johanna Konta: Former British No 1 retires from tennis after battle with knee injury

Konta wrote on Twitter: "My playing career has come to an end, and I am so incredibly grateful for the career that it turned out to be" 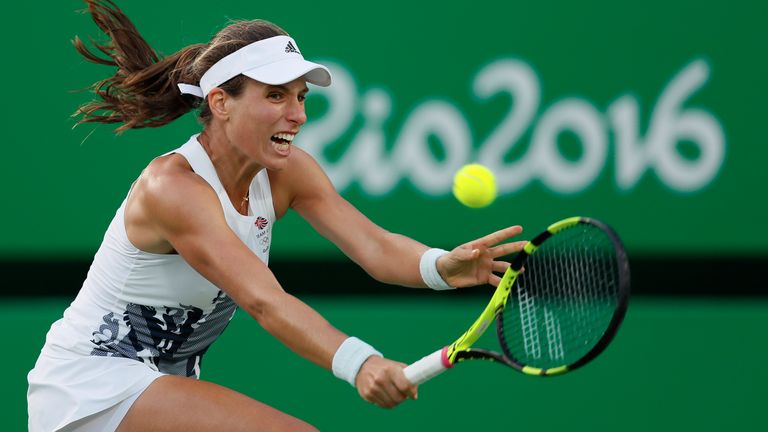 Johanna Konta, former British No 1, has retired from tennis.

The 30-year-old has struggled with a persistent knee problem over the past couple of years and slipped to 113 in the rankings.

Konta made the announcement on social media with a post headed "Grateful".

"My playing career has come to an end, and I am so incredibly grateful for the career that it turned out to be.

A little update from me 👋 pic.twitter.com/L1tpjDHW1o

"All the evidence pointed towards me not "making" it in this profession. However, my luck materialised in the people that came into my life and impacted my existence in ways that transcended tennis.

"I am so incredibly grateful for these people. You know who you are.

"Through my own resilience and through the guidance of others, I got to live my dreams. I got to become what I wanted and said as a child.

"How incredibly fortunate I count myself to be. How grateful I am."

Born in Australia to Hungarian parents, Konta moved to Europe to pursue her tennis career as a teenager, settling with her family in Eastbourne and becoming a British citizen in 2012.

Konta's emergence at the top of the game began when she took the British No 1 spot, which she went on to hold for almost six years.

The following year she reached her first Grand Slam semi-final at the Australian Open, subsequently climbing into the top 10.

Her best season was arguably in 2017, when she became the first British player since Virginia Wade to make the semi-finals at Wimbledon, won the biggest of her four career titles at the Miami Open and peaked at fourth in the world rankings.

Konta slipped down the rankings in 2018 but was resurgent the following year, making another Grand Slam semi-final at the French Open as well as the quarter-finals at Wimbledon and the US Open.

Thanks for the memories...

Scott Lloyd, chief executive of the Lawn Tennis Association, said: "On behalf of the LTA and everyone involved in British Tennis I want to express my appreciation to Johanna for her hugely impressive career.

"To reach the semi-finals of three slams and spend more time as British number one than any other woman since the WTA rankings began shows the level of her achievements. We wish her well in the future, and hope that she will continue to play a role in British tennis in the years to come."

Iain Bates, LTA head of women's tennis, said: "Johanna is a tremendous inspiration for so many in British Tennis and everyone at the LTA and involved in the sport is immensely proud of what she has achieved.

"It has been a great privilege for me personally to watch her evolve into the player she became. She leaves a legacy of perseverance, determination and professionalism that will be carried forward by the current and next group of players."

Great Britain's Billie Jean King Cup captain Anne Keothavong added: "What Johanna accomplished on the court was incredible, but her professional aptitude is what set her apart.

"She was a Billie Jean King Cup player representing her country, she laid it all out there, led by example and who can forget her marathon performances in 2019 during our first home ties in more than quarter of a century. More than anything she is a kind and caring person, and we wish her all the best in the next chapter of her life."

Konta will shortly marry fiance Jackson Wade and has made no secret of her desire to start a family, something she did not want to do alongside her career.

She retires as the best British female player of the last 30 years and someone universally praised for their professionalism and application.

Rumours had been growing Konta would not start the 2022 season and, having stopped her year in August because of a groin injury, she had not been seen at her training base at the National Tennis Centre.

Her final match was a three-set loss to Karolina Muchova at the Western and Southern Open in Cincinnati.