Emma Raducanu proud of her achievements in 2021 after taking stock during her first holiday in seven years in the Caribbean; the US Open champion will now train in Abu Dhabi with her new coach Torben Beltz in preparation for next year's Australian Open

US Open champion Emma Raducanu says she is ready to "improve and get better" ahead of her first full season on the Tour.

The British teenager was in buoyant mood after playing for the first time on home soil since her historic Flushing Meadows triumph in September.

Raducanu beat her good friend and practice partner Elena-Gabriela Ruse in an exhibition match at the ATP Champions Tour event at London's Royal Albert Hall before discussing her hopes for next year and why she sees Formula 1 world champion Lewis Hamilton as her mentor. 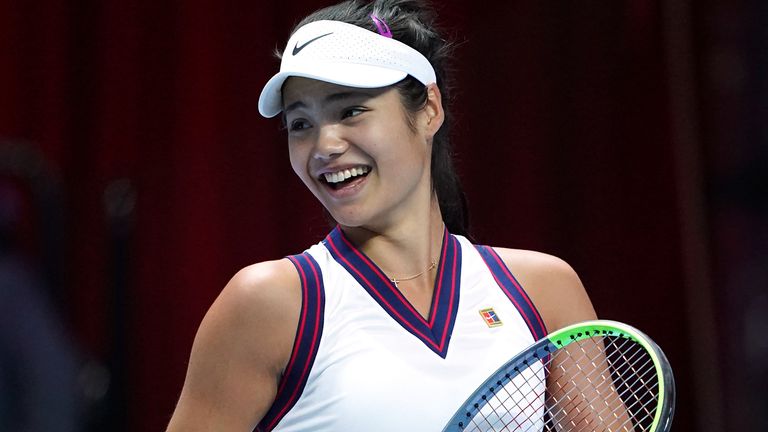 "Pressure is a privilege. I thrive under the adrenaline"

Raducanu, who turned 19 earlier this month, is ready to embark on a gruelling schedule, starting in Australia.

The British No 1 batted away suggestions she is certain to become a big scalp for her opponents by taking a famous quote out of tennis legend Billie Jean King's book.

"I'm not sure of other people's opinions of me," she said. "It's going to happen, pressure is a privilege. I thrive under the adrenaline, I hope.

"So for me, I don't really think about other people's opinions or expectations. The only ones I have are that of myself, to improve and get better." 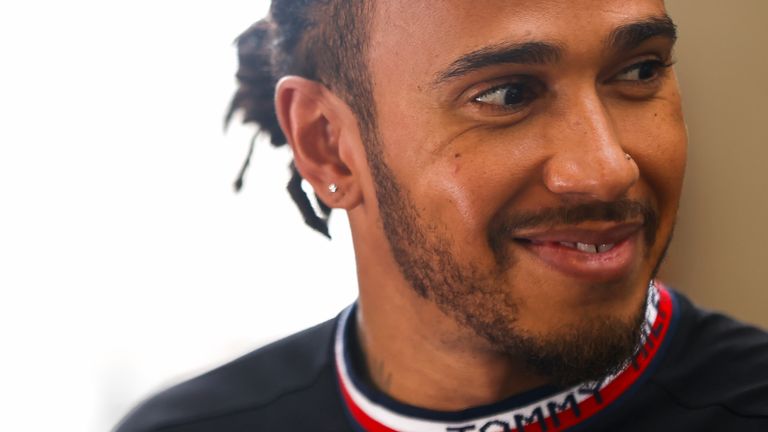 "He has been such a good role model for me, in terms of just helping me through these next stages. He is a really cool person"

She remains determined to stay grounded despite her stunning success, with the Bromley teenager adding: "For me, I am just going about my business.

"I take the train sometimes. I am doing the same journeys I used to. I feel like I am the exact same person. I will go about everything I used to do. I don't see why I should change the things that got me that title. I am still enjoying it."

Raducanu also revealed F1 star Hamilton has been mentoring her after meeting him at the Met Gala in New York following her extraordinary US Open success.

"He has been such a good role model for me, in terms of just helping me through these next stages. He is a really cool person," she replied.

"He's just been really cool in helping me. He said be patient, ride the wave, good reassurance. He's a really cool guy." "Torben is a super positive guy and he brings great energy. He's someone whenever you're around him you can't help it because it's just like infectious"

The teenager has been back in pre-season training and is all set to begin working with her new coach, Torben Beltz.

"We've been in communication a lot," said Raducanu. "I've just been doing a lot of fitness, like four to five hours a day training and start my tennis next week, so he's coming in and we'll be working hard together during the off-season and into Australia."

Beltz, who is best known for having coached former world No 1 Angelique Kerber, has a reputation of being a compassionate and likeable presence, rather than a hard taskmaster.

Raducanu continued: "Torben is a super positive guy and he brings great energy. He's someone whenever you're around him you can't help it because it's just like infectious.

"It's really cool to have that in my team so he's constantly lifting the mood. I'm really excited to work with him and I'll get a better chance to get to know him better this off-season and see where it goes."

On her lengthy training sessions, Raducanu said: "I start the day on a high and by the fourth hour I'm already feeling it. For me, I know that gives me confidence that I'm putting the work in. I take that as a mental strength and an advantage and although four weeks is a great time, the off-season is quite short.

"Realistically, I'm not sure how much I can improve in four weeks, but I feel like playing a full schedule next year I'll improve. Just playing matches and getting match fitness - that's the only real way it kind of happens."

For many tennis observers, Raducanu's journey to the upper echelons of the sport began while playing doubles alongside Joe Salisbury against Andy Murray and Jodie Burrage at the Battle of the Brits event in the summer of 2020.

It was a competition in which the teenager thrived and one in which she revealed was like going from "nothing to feeling like I got that hunger".

She said: "When I was competing I was so hungry to stay in the tournament because I knew every match could be my last and I could go six or 18 months without competing, so it was just that desire to be on a tennis court."

Raducanu, who was ranked at No 338 before the start of Wimbledon, insists she is "still the same person" but also believes she still has many improvements to make.

"I feel like I've gone a long way to developing and my game has a lot of places I feel it can improve, but I've got good people around me and I'm just really excited they'll support me," said the Briton, who is now ranked 19 in the world.

"For me, it's all about patience and smoothing out that consistency."