Daniil Medvedev, who will become the new world No 1 on Monday, wants to "promote peace all over the world"; fellow Russian Andrey Rublev wrote "no war, please" on a TV camera after his semi-final victory in the Dubai Tennis Championships on Friday

Daniil Medvedev says he wants to "promote peace all over the world" while his Russian compatriot Andrey Rublev delivered a similar message following the military invasion of Ukraine.

Rublev wrote "no war, please" on a TV camera after defeating Poland's Hubert Hurkacz to reach the final of the Dubai Tennis Championships on Friday.

Medvedev, speaking after his quarter-final victory over Japan's Yoshihito Nishioka in the Mexican Open, had said he was "all for peace". 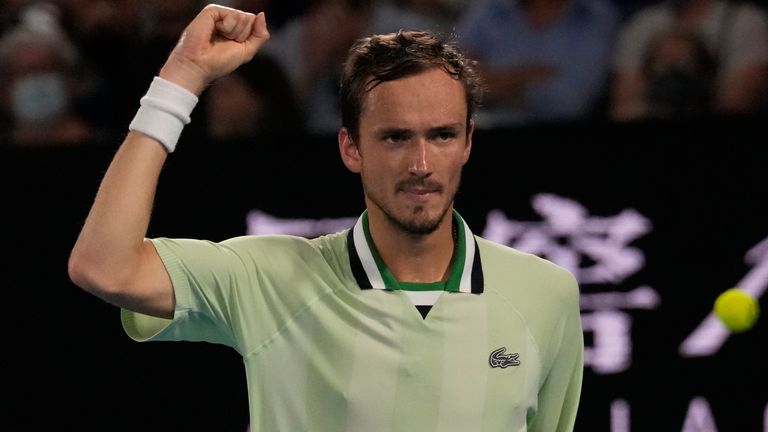 The 26-year-old, who will overtake Novak Djokovic as World No 1 on Monday, said: "By being a tennis player, I want to promote peace all over the world.

Medvedev's compatriot Rublev paired up with Ukrainian Denys Molchanov to win a doubles title in Marseille last week and Medvedev supported the partnership.

"This was amazing because I think people need to stay together and that's the most important [thing]," Medvedev said. "In this moment, you understand that tennis sometimes is not that important."

Speaking on Thursday, Rublev said he had received bad comments online because of the situation in Ukraine.

"In these moments you realise that my match is not important. It's not about my match, how it affects me. What's happening is much more terrible," Rublev said.

"You realise how important it is to have peace in the world and to respect each other no matter what, to be united. We should take care of our earth and of each other. This is the most important thing."

Medvedev will now face Rafael Nadal on court in Mexico, with the two set to meet for the first time since their epic Australian Open final last month.

"Everybody knows how difficult it is to play against Daniil," Nadal noted. "I know I have to play at my highest level if I want to have any chance, and that's what I'm going to try. I have to play my game."

The other semi-final will be contested between Britain's Norrie and the world No 4 Tsitsipas.

Norrie lifted his third ATP title at the Delray Beach Open recently and in Acapulco, lost just one game during a 6-1 6-0 victory over Germany's Peter Gojowczyk.

Gojowczyk had gone into the contest having received a bye, following Alexander Zverev's behaviour which saw him removed from the event

Following a loss alongside his doubled partner Marcelo Melo, Zverev struck the chair of umpire Alessandro Germani four times, narrowly missing his leg on one occasion, and was also heard shouting expletives towards the official.

He has now has been fined $40,000 dollars, forfeited more than $30,000 in prize money and lost all of his rankings points from the event.

The ATP will conduct further review of Zverev's actions in Mexico and German could yet face further sanctions.

Tsitsipas, who was runner-up in Acapulco last year, will be Norrie's semi-final opponent following his 6-3 6-4 victory over American Marcos Giron and the Greek athlete has not dropped a set this week.