Rafael Nadal insists he will take the positives from his three-set defeat to unseeded Alexandr Dolgopolov at the Aegon Championships.

The Spaniard headed to Queen's Club in fine spirits just two days after winning his second ATP Tour title of the season in Stuttgart.

But fatigue caught up with Nadal as the tricky Dolgopolov produced a shock 6-3 6-7 (6-8) 6-4 success to deny the former world No 1 a meeting against his compatriot Guillermo Garcia-Lopez. 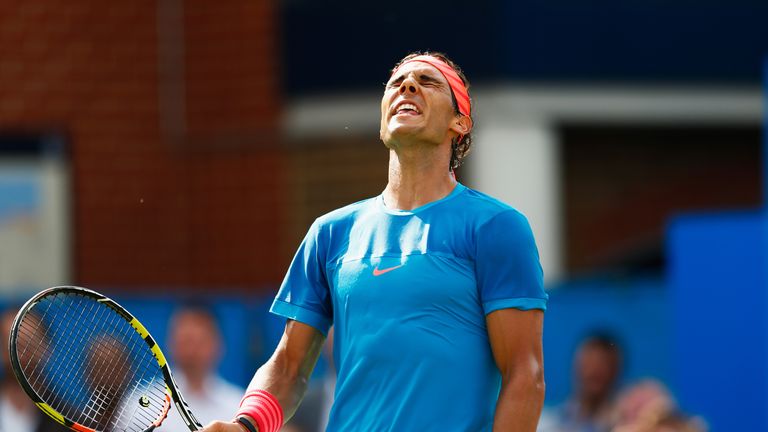 I'm going to come back strong and get a good week of training before Wimbledon and I hope to be 100 per cent fit to play at Wimbledon.

"The good thing is that I am positive mentally," said Nadal, who last won the prestigious tournament in 2008. "I'm playing well and I hope to have some more good days of practice here and then some good days at home," he said.

"I'm going to come back strong and get a good week of training before Wimbledon and I hope to be 100 per cent fit to play at Wimbledon. Today was a good motivation for me.

"Dolgopolov's serve was huge today and his second serve was so difficult to return. I was not able to read much but I was fighting every point.

"I played with the right concentration and the right motivation. I never gave up when I had tough moments and I'm not happy.

"I lost today when I had the chance to win, but that's it, that's tennis on grass."

Dolgopolov now has consecutive wins against Nadal after beating him at Indian Wells last March and says he will be hoping to improve on his quarter-final appearance at Queen's.

The Ukrainian has put his win down to his improving form after snapping a three-game losing streak.

"The last few years I have played some really good matches on grass," he said. "I have started playing some nice tennis and getting some good wins.

"Maybe I was a bit more cautious about stepping on grass this year than I was last year because I remember that I was running for all the balls, tripping and sliding.

"This year I took my time to adjust my footing because the transition from clay to grass is very hard.

"I've played all my life on clay. Sliding is natural, I did it as a child. Coming to the grass, the footwork is completely different."

And Dolgopolov admits defeat won't have much a bearing on Nadal, who he believes is showing strong signs of improvement.

"Nadal is serving better for me, much more aggressive, and I was more comfortable on the return when we last played at Indian Wells than the matches before," added the 26-year-old.

"He's improved his serve and playing more aggressive because this is grass-court tennis."