Djokovic becomes the first man in the Open era to win slam titles across three decades, while he, Nadal and Federer continued the old guard's major dominance. They extended their winning streak to 13-tournaments, leaving Marat Safin and Stan Wawrinka as the only other men to have won here since Federer's first title in 2004.

"I would like to start by saying congratulations to Dominic for an amazing tournament," said Djokovic, who received the trophy from 2005 champion Marat Safin.

"It wasn't meant to be tonight but you were very close to winning it. You have a lot of time in your career and I'm sure you will get one of these Grand Slam trophies - more than one."

A final for the ages 🤗#AO2020 | #AusOpen pic.twitter.com/rICxOSKDxp

Weeks as ATP World No 1 since Wimbledon 2011

While Djokovic went into the contest pursuing a 17th Grand Slam, Thiem knew he could take confidence from his recent record against the Serbian having beaten him in four of their last five meetings.

And after Daniil Medvedev pushed Rafael Nadal all the way in the US Open final, it was Thiem's turn to take on the old guard. But the 26-year-old Austrian, who was the runner-up to Nadal at the French Open the past two years, was put under immediate pressure by an intimidating Djokovic on his favourite surface. It came as no surprise when he broke through before racing into a comfortable 3-0 lead.

The stars of the sporting world align at the #AusOpen ✨

Thiem, though, responded in some style after getting the better of Djokovic during a rip-roaring 24-shot rally to earn a break point. And he took his opportunity after forcing the elasticated Djokovic into a rare error on the backhand wing to bring it back to 3-4. Some exceptional defensive work enabled Thiem to level up having now clawed his way back into the contest.

Djokovic, a dominant force at Melbourne Park, where he has never lost a semi-final or final he has contested, turned up the heat in the 10th game, taking his second set point chance following an untimely double fault from Thiem to move ahead after 52 minutes of pulsating tennis.

The 32-year-old from Belgrade held an impressive 11-3 record in Grand Slam finals after winning the opening set, but he was feeling the pressure coming from Thiem's end of the court and a calamitous double fault from the Serbian handed his opponent an early break in the second set before the second seed lifted his game to strike back in the eighth game.

Roger Federer debuted as world No 1.

Only Federer, Djokovic, Nadal and Murray have been No 1 since 2 February 2004.

Djokovic was then given two time violations on successive points in the next game cost him a first serve, and Thiem claimed the advantage back. Djokovic tapped umpire Damien Dumusois sarcastically on the foot as he returned to his seat and then telling him, "Good job man, made yourself famous. Well done." Thiem duly served out the set to level up.

Thiem had been thought of as a clay-court specialist but 2019 proved to be a breakthrough season on hard courts, with three of Thiem's five titles coming on the surface. He was putting his all-court talents to the ultimate test against Djokovic, who had clearly lost his rhythm and dropped his serve in consecutive service games to hand the Austrian a 4-0 head start in the third set.

Having lost six consecutive games, Djokovic finally broke that sequence with a hold, but it was too late to claw his way back and Thiem closed it out 6-2 to edge nearer to his maiden Grand Slam title.

A weary-looking Djokovic had already consulted the doctor during the previous set and he left the court before the start of the fourth to receive some medical attention.

The time off court appeared to revive Djokovic as both players went at it hammer and tongs in an entertaining fourth set. Djokovic showed resilience and perseverance to save break point in the third game and that proved to be a big moment as he began serving better again, looking more stable.

He made the breakthrough in the eighth game before serving it out to send the match into a deciding set shoot-out.

It was the third time in the last four years in which the Australian Open final went to five sets and Thiem, who was trying to become the first man born in the 1990s to win a Grand Slam title, made three errors on the forehand side to allow Djokovic to take a 2-1 lead before consolidating the break by winning a nerve-jangling fourth game.

Some clutch serving put Djokovic to within a game of winning another title in Melbourne at 5-3 and he successfully served it out after four hours to remain the king of Melbourne Park. 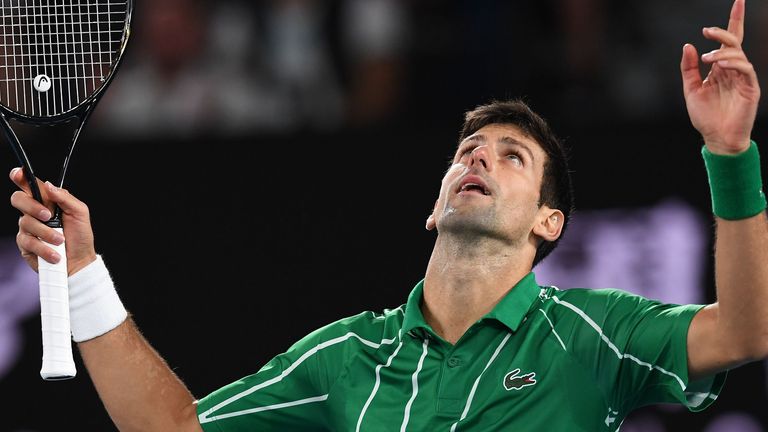 There was some devastating things that started 2020 with huge bushfires here in Australia, conflicts in some parts of the world. One person that I considered close in my life, a mentor to me, Kobe Bryant, passed away with his daughter. I would like to say this is a reminder to all of us we should stick together more than ever. Of course we are part of professional sport but obviously there are more important things in life.

After receiving the runners-up plate, Thiem said: "I would like to start with a huge congrats to Novak, amazing achievement and also to all your team.

"Unreal what you are doing throughout all these years. You and two other guys brought men's tennis to a completely new level. I'm really proud and happy that I can compete in these times. I fell a little bit short today but I hope soon I can get the revenge."