Dominic Thiem will aim to pull off a stunning surprise and defeat 11-time champion Rafael Nadal in the French Open final - a match he describes as the "ultimate challenge".

The 25-year-old Austrian, now one victory away from a maiden Grand Slam title, faces a repeat of last year's showpiece, having never previously won a set in their three meetings at Roland Garros.

Thiem, however, did win their most recent encounter at the Barcelona Open as he joined Novak Djokovic as the only other player to have defeated the Spaniard on clay four times.

But to replicate such a triumph on the clay courts at Paris appears inconceivable. Nadal has never lost in his 11 previous championship matches on Court Philippe-Chatrier as the second seed goes for an 18th Grand Slam title.

"To play Rafa here on this court, is always the ultimate challenge, one of the toughest challenges sports in general give," said Thiem, who defeated world No 1 Djokovic in a semi-final epic over two days.

"I played a really good match against him in Barcelona. It was six weeks ago. So, of course, I [will] try to do similar even though it's way tougher to play him here.

"But I [will] try to keep all the positive emotions I'm having right now, I'm having from this amazing match today, and go with a really positive mind into the match, and then we'll see."

Thiem, who is the first Austrian to reach multiple Grand Slam finals, can take encouragement from his previous success against the 'King of Clay'. His win in Barcelona was the fourth straight year he has overcome the 33-year-old on clay.

Nadal vs Thiem: Time on court

Thiem has spent 15 hours and 25 minutes on court this fortnight, compared to 13 hours and 24 minutes for Nadal.

The match - the 13th encounter between the pair - will see Thiem take to the court for the fourth consecutive day after poor weather caused havoc to the schedule.

"I feel good. Luckily I didn't have so many long matches before [Saturday]," said Thiem. "[Saturday] and [Friday], of course, was tough. It's probably a little bit more difficult to play these four hours with all the interruptions than if you played in one time. 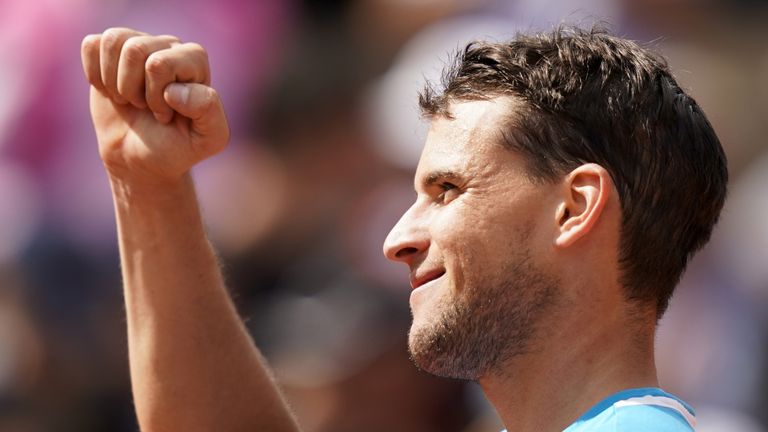 I'm ready to leave all, or everything I have, out on the court.

"But still, I'm feeling fine. I'm full of adrenaline, of course, still from [Saturday]'s match, and also I will have that tomorrow. So I'm not going to be tired. It's all going to come after the tournament. I'm ready to leave all, or everything I have, out on the court."

On the other side of the court appears on the face of it to be an unstoppable force. Nadal has recovered from a slow start to the clay-court campaign to look the dominant force he has been for so long on this surface.

The 17-time Grand Slam champion has lost just the one set on his way to the final and has won the title at Roland Garros on 11 of his past 14 appearances.

"Being in the final of Roland Garros again means a lot and especially coming back from a tough situation with all the injuries that I had," said Nadal, who swept past great rival Roger Federer in straight sets in the semi-finals.

"Being able to recover the level that I had the past couple of weeks is something that I am very proud of. I'm just focused on keeping going and doing my thing well."

Thiem will have to reach new heights if he is to prevail against Nadal, who has made the second major of the year his second home, and join women's champion Ashleigh Barty as a maiden Grand Slam champion.

Nadal, meanwhile, is on the cusp of landing an 18th Grand Slam title and narrowing the gap to 20-time major winner Federer, while finishing as the last man standing in Paris once again.

We will have the 2019 French Open men's final covered via our website skysports.com/tennis on Sunday. On the move? Head to our app for mobile devices and iPad, or follow our Twitter account @SkySportsTennis to join in the conversation.