The French Open begins with all eyes on defending champions Novak Djokovic and Barbora Krejcikova, while 'King of Clay' Rafael Nadal will be seeking a 14th title at Roland Garros; here are your key questions answered and inside information from journalists and commentator, Barry Millns

It's that time of the year when the clay-court specialists assemble on the red dirt of Roland Garros. The French Open is upon us, so who will prevail? Novak Djokovic, Iga Swiatek, Barbora Krejcikova, Rafael Nadal and Britain's Emma Raducanu will all be hoping to stake their claim.

World No 1 Djokovic battled back from two sets down to defeat Stefanos Tsitsipas in last year's men's singles final to add to his crown in 2016.

Czech star Krejcikova will be hoping to become the first woman to retain the Suzanne Lenglen Cup since Justine Henin, who won a hat-trick of titles between 2005-07.

There are a number of key questions ahead of this year's fanfare, which begins on Sunday, May 22. Here's what you need to know...

Djokovic is back but can he retain his title? The world No 1 appears to be back in peak physical condition as he prepares to focus all his attentions on defending his French Open title.

He arrived in Melbourne unvaccinated with a medical exemption granted by Tennis Australia but after 11 days he was deported following a visa fiasco.

The Serb struggled with his game in Belgrade, looked better in Madrid, and then found top gear in Rome.

"Right now I feel perfect," warned Djokovic, who now has Nadal's 21 Grand Slams in his sights.

He begins his title defence against Japan's Yoshihito Nishioka.

Djokovic's route to the final

Is Rafa fit and ready to extend his Grand Slam streak?

Nadal posted a picture of himself training in full flow at his academy in Mallorca as he prepares to make the trip to Paris, but there are genuine concerns over his fitness.

The 35-year-old Spaniard flexed his muscles at the start of 2022, embarking on a remarkable 20-match winning streak which included record-breaking success at the Australian Open.

After Carlos Alcaraz defeated his idol in Madrid, Nadal then limped out of the Rome Masters following a three-set defeat to Denis Shapovalov, so is he fit?

"It is something that I live every day with, so is nothing new for me and is not a big surprise. I am here just to play tennis and to try to make the best result possible here in Roland Garros," he said in Paris.

"And if I didn't believe that this thing can happen, probably I would not be here."

The one thing we have learnt down the years is that you can never keep the 'King of Clay' down as he looks to claim his 14th title at his spiritual home. Would you back against him?

Nadal will start his campaign against Australian Jordan Thompson.

Nadal's route to the final

When Ashleigh Barty retired we were all wondering about who would step up and dominate the women's game. Iga Swiatek was the answer.

Her form has been scintillating so far this year, including a winning streak of 28 matches and five titles, and the French Open crown seems to be the 20-year-old from Poland's to lose.

"The transition that I have to do to clay, it's pretty different because usually it was like, 'whoa, clay, finally I can play well'. I feel like my level was high anyway," said Swiatek. "Hopefully I'm just going to be able to enjoy tennis as much as I did for the whole season."

"She has found that consistency she talked about trying to get a hold of and boy, has it come through. She's just a level or two above the rest. Only one player has taken a set off her very recently, but that's the only one in all those matches. That forehand now is such a huge shot and it's also her mental strength as well."

Swiatek's route to the final

A rotation of coaches and injury woes but can Raducanu get it together in time for Paris?

The US Open champion goes into the tournament without a regular coach after splitting from German Torben Beltz last month.

She's endured a difficult start to the year and was forced to retire from her most recent match for the second time this season at the Italian Open due to a back injury.

Raducanu won back-to-back matches in both Stuttgart and Madrid and pushed world No 1 Swiatek, but the 19-year-old is in need of some support as her body adjusts to the demands of competing on the Tour week in, week out. 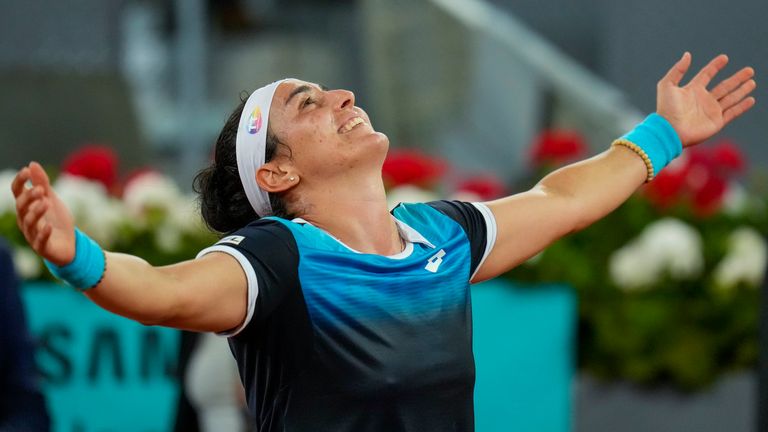 A long run in Paris looks unlikely but the British No 1 thinks otherwise, saying: "I think that I have definitely come a long way and probably progressed faster than expected of myself in the last few weeks and I really am enjoying the clay.

"To be honest, I think I'm enjoying it more than I thought I would. Clay at the beginning kind of was like written off, 'Oh, it's a clay court, just have a go'. But now I really believe that I can be good and faster than I thought it would be."

Raducanu's route to the final

Who are the other Brits in action?

With Raducanu set to complete her set of Grand Slam debuts by taking to the Parisian clay, she will be joined by Cameron Norrie, who is still searching for his major breakthrough.

He won his third ATP Tour title in Delray Beach in February and reached another final in Acapulco. He is also through to this weekend's final in Lyon. His relentless, physical style is well suited to clay but he has failed to make it past the third round so far amid some unfortunate draws.

Dan Evans reached the third round at the Madrid Open and will again be seeded as he resumes his search for a first win at Roland Garros against Argentina's Francisco Cerundolo.

Heather Watson had to rely on withdrawals from other players to make it into the main draw for the 10th time at Roland Garros. The just-turned 30-year-old has reached the second round six times in Paris.

She will meet French teenager Elsa Jacquemot in the first round.

Harriet Dart will make her main draw debut having achieved a major goal by breaking into the top 100 and bypassing qualifying.

She enjoyed the best week of her career when she defeated Elina Svitolina and Kaia Kanepi to reach the fourth round in Indian Wells earlier this year and will open against former quarter-finalist Martina Trevisan.

What about this Spanish wonderkid Carlos Alcaraz? How good is he? Long touted as Nadal's successor, Alcaraz has been tipped by no less than Djokovic and Nadal as one of the favourites at Roland Garros. And they should know, after the 19-year-old beat the illustrious pair on his way to the Madrid title a fortnight ago.

With every shot in the book and a mentality to match, here is a player with the tennis world already at his feet.

Alcaraz makes no secret of his ambition, saying in an interview with Marca: "My goal until the end of the year is to try to win one of the three remaining Grand Slams. It is a great motivation for me and I will fight for it."

"I'm going to go with Alcaraz to get to the final. He already has such ambition and belief in his game and if he maintains his fitness and health he's going to win these big prizes. Nadal won Roland Garros at 19, why can't he?"

Who are the dark horses?

Ons Jabeur is a former Roland Garros junior champion who has cemented her place in the world's top 10 at the age of 27. The Tunisian made history last year by becoming the first Arab woman to reach the quarter-finals at Wimbledon and her use of slice, variety and a drop shot makes her a lively contender for a maiden Grand Slam title in Paris.

However, he looks tailor-made to win this title one year. It could be his time now. 43.6 million Euros - Total price money, which is a record amount

3 tournament weeks (including the qualifying rounds)


Will we see Medvedev and Azarenka at the French Open?

Due to Russia and Belarus' involvement in the war in Ukraine, teams and athletes from the former two nations have been banned from participating in some sporting competitions or seen sanctions placed on their involvement.

Wimbledon and the Lawn Tennis Association have banned Russian and Belarusian players from this summer's tournaments but world No 2 Daniil Medvedev, Andrey Rublev, Victoria Azarenka and Aryna Sabalenka will be allowed to play in Paris.

They will compete under a neutral flag and their anthems will not be played if they triumph.

DJ & match. Get ready for some electric night sessions

There will be 10 night sessions, scheduled to start at 7.30pm (BST) on Monday 23rd May to Wednesday 1st June - and they all include a mega pre-match show.

Every evening, a well-known DJ will take to the decks to light up Philippe Chatrier with a musical performance.