"It is a massive compliment to me. It's a great achievement"

By Raz Mirza at Wimbledon

Johanna Konta said "it's a great achievement" after the bookmakers' favourite for the title became the first British woman to reach the Wimbledon quarter-finals since Jo Durie in 1984.

She had previously won only one match in five Wimbledon appearances. But after racking up her fourth in the tournament, she now finds herself facing Romanian second seed Simona Halep and, with the woman's draw looking wide open, has an outside chance of becoming the first home champion since Virginia Wade 40 years ago.

"It's very exciting," said Konta. "It's another step forward to being involved in the event for the full two weeks. But it is a massive compliment to me. It's a great achievement.

"I've dreamed of it ever since I was a little girl, to be a Grand Slam champion. But right now I'm in the quarter-final stage. and I'm playing against an incredibly tough opponent next. That's my next battle. That's all I've got my mind on." 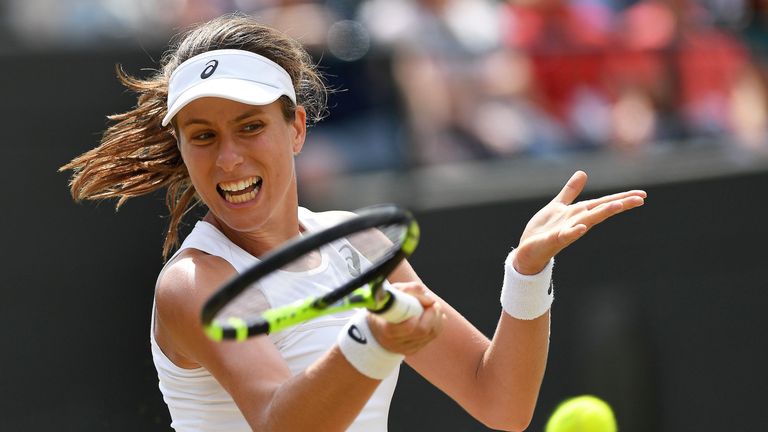 My team are demanding the muffins. I have a very high-maintenance team.

Konta also revealed she is under intense pressure to continue making her popular homemade muffins which have proved a hit among her support team.

She said that baking had become "a habit" during the tournament rather than a means of relaxation.

"It's just that I've finally gotten the chance to actually stay at home a little bit and use my oven more than anything," she said.

"It's more the fact that I have an oven, that I'm using it, and not necessarily for relaxation purposes.

"Now it's kind of become a habit. My team are demanding the muffins. I have a very high-maintenance team."

Can Johanna Konta and Andy Murray make history for Britain at Wimbledon next week?

For those on the move, we will have Wimbledon covered via our website skysports.com/tennis and then click through to our dedicated section skysports.com/tennis/wimbledon. On the move? Head to our app for mobile devices and iPad, or follow our Twitter account @SkySportsTennis to join in the conversation. Who will win the All England Club titles this summer? Have your say...

Who will win the 2017 Wimbledon women's title?